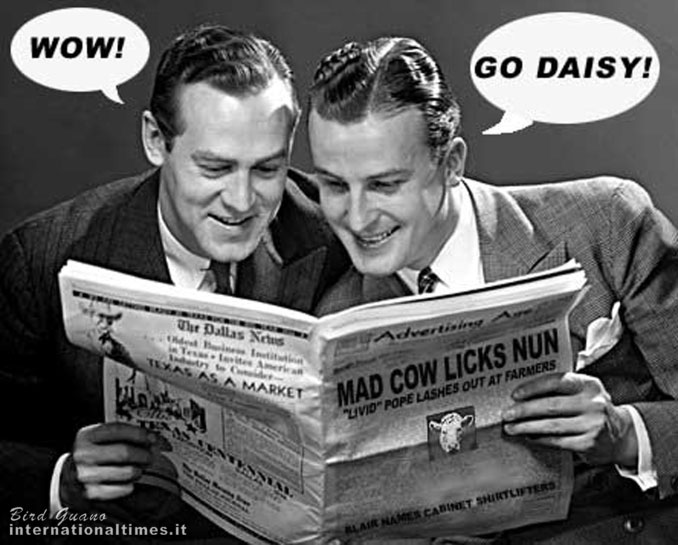 SAUSAGE LIFE
The column that doesn’t shrink when you put it in the tumble dryer.

MYSELF: You like a little puzzle don’t you?
READER: Oh I do, I do. What sort? A jigsaw puzzle? A Christmas cracker riddle?
MYSELF: Neither. I was sent this combination poem/riddle, which I thought I might include for the amusement of our readers. See if you can guess the answer.

WHO AM I?
By Celia Putty
A narcissistic vacuum
who’s dependent on his mama’s milk,
a sub-moronic sociopath,
a pedlar of ersatz silk.
A naked porcine emperor
resplendent in his sty,
whose porky hirsuit kisser
isn’t easy on the eye.
A tweeting twat
whose surplus fat
could feed a thousand Innuits,
whose shop-bought wife
has swapped her life
for glitter, glitz
and bigger tits.
Who am I?

READER: Are you Lars Vøndervøndervønder the Swedish jazz saxophonist?
MYSELF:  Close, but no cigar.

THE FOOD OF LOVE
Classical music has gained the patina of middle class respectability over the years, but this contemporaneous account of a rowdy London concert  in 1765 by Times’ music critic Archibald Ferret  reveals a somewhat different story:
Crowds packed the upstairs room in city alehouse The Swan & Harp, a  to witness, for an admission price of two shillings and sixpence per person, a concert by the Austrian musical prodigy Wolfgang Amadeus Mozart.  Mr Mozart’s air of detached arrogance was punctured somewhat as he confronted the rickety upright piano provided for him by the management. The general attitude of those attending is perhaps best illustrated by the following exchange with the inebriated ruffians who had commandeered the front row seats.
MAN1: ‘Ere Mozart! Go on! Give us a tune! How about a bit of Chopin?
MOZART (wrestling with locked piano lid): No!
LADY OF THE NIGHT (to ribald laughter): Oooh, I do like a man who can tickle the old
ovaries!
MAN2:  A bit of Bach’s prelude in G minor then!
MAN1: Yeah, or the andante sostenuto from Haydn’s P.9 Symphony in B-Flat Major! MOZART (standing up and throwing piano stool at audience): Fuck off, I only do my own stuff.

SUPERHAT
Failed politician, bully and litigious star of Russia Today ‘Gorgeous’ George Galloway, is suing the entire population of Scotland for the recent, tragic loss of his hat, which he blames on the rise of the SNP. “My hat is me,” he told us, “and I am my hat. Without it I am but a mere mortal, less powerful than a locomotive, and unable to leap even the smallest buildings with a single bound.”
The narcissistic gasbag was overheard the other day in Dunn & Co the famous London hatters, shouting at cowed shop assistants as he tried on yet another ridiculous fedora. “Does my head look big in this?” he was heard to whisper to Ivana, his Slavic assistant from the corner of his cupid-lipped orifice as he gazed at his adored reflection, which, he thought, resembled nothing so much as a younger, slimmer Orson Welles.

Dear Wendy,
I own a beautiful Victorian doll’s house with 4 bedrooms (2 ensuite) and 2 receptions, which also features an original Victorian kitchen with miniature utensils. It is now on the market for £385,000, but has been occupied by a family of mice. There were only four of them at first, but now the place is, frankly, overcrowded. Citizen’s Advice and social services have offered no solutions and I am now at the end of my wits. How can I achieve vacant possession so that I can take my rightful place on the property roundabout?

Dear Westphalia,
I think you’ll find it’s a property ladder by the way, nonetheless I do sympathize with your predicament. I once owned a bicycle whose hollow frame was occupied by a boa constrictor which had escaped from a nearby bedsit. I enjoyed the notoriety at first, but once the novelty had worn off, I was forced to employ a professional snake charmer. Unfortunately after having very efficiently charmed the reptile out of my bicycle, he hypnotized me and stole my life savings. Anyway, as long as you are not averse to the sound of screaming rodents, there is a huge choice of mousetraps on the market, or you could try one of the many deadly poisons available (stay clear of Novichok though!). As a vegetarian animal rights activist I would be more inclined to pursue one of the more humane options, like heavy sarcasm or music aversion therapy. Mice hate the sound of the Argentine tango accordion by the way, if that’s any help.
Wendy

Dear Wendy,
I wonder if you could settle an argument. My husband insists that it can be potentially fatal to eat any seafood beginning with the letter W, unless there is an R in the month. I reminded him that on February 29th 2016, three catholic priests died from an attack of ciguatera poisoning after eating contaminated winkles at a leap-year miracle party in a Lourdes nightclub. He maintains that February, having two Rs, is exempt from that culinary rule, adding rather cruelly that it served them right. I say that surely having two Rs makes the month twice as dangerous as the others viz a viz seafood poisoning,? Who is right?
Amelia Sternbagel, Silverhill

Dear Amelia,
I’m sorry to have to tell you that your husband’s rather brutal assessment of the situation is in fact correct. February, contrary to TS Elliot’s opinion, is in fact the wickedest month, but not in a hip-hop sense. Due to its quadrennial elasticity and its double-barrelled R, it can also be frisky and anarchic. Those two Rs, when coupled with a leap-year can easily cancel out any food-related pearls of folk wisdom, exposing the confident oyster swallower, or in the sad case you describe, the ecclesiastical winkle gobbler, to unexpected stomach cramps, convulsions and speaking in tongues. My advice with any seafood, regardless of the month in which it is consumed, is to boil it thoroughly in a spacious cauldon with two tablespoons of bicarbonate of soda and a dash of goat’s urine for about three hours. Then leave to ferment before adding 500 grams of well-rotted manure. Leave to cool and consume within four hours. It may taste like the decomposing scrotum of a dead possum, but you can rest assured it will be quite safe to eat.
Wendy

View all posts by Colin →
This entry was posted on 5 March, 2022 in homepage and tagged Colin Gibson, Sausage Life 219. Bookmark the permalink.