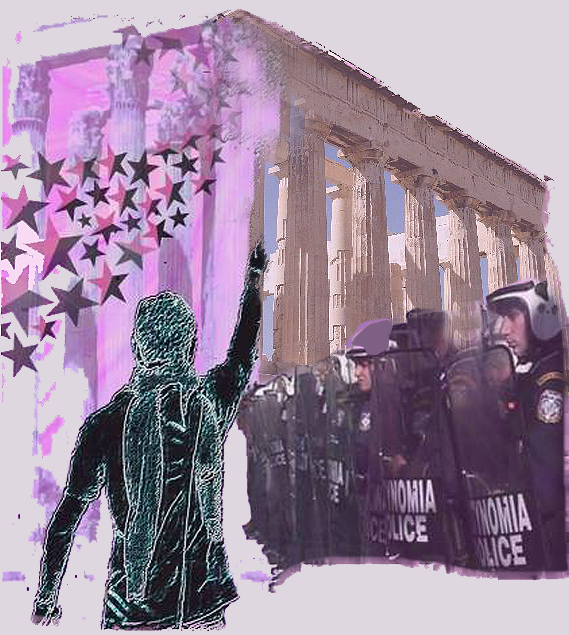 At the door of Zaimi, a squat in Exarchia, I was shown a battered potato sack functioning as a doormat. Printed on it was the faded emblem of the Syriza government, worn from repeated stamping. I was reminded, in a somewhat facile way, of a story from Imperial Japan: To ward off Christians, small mosaics of Christ’s face were lain outside various buildings of note, to be stomped on three times before entering. This sack, of course, has a wholly different justification. Rather than proving one’s lack of piety, it demonstrates a disdain for any representative of the state, or authority in general. I stomp inside; the ouzo is 50 cents a glass; a few dozen people mingle, argue, and laugh.

Apart from Athens, I know of no contemporary city with a distinct anarchist district. Social centres, car parks smashed into community gardens, and inexpensive cafes compose what the financial journalist Paul Mason calls “the last great Bohemia of Europe”. Presupposing any of these freedoms is the relative freedom from the police, the natural enemies of the imagination. It is an achievement hard won, and, fiercely defended by its denizens. Under the last government, police regularly roared through Exarchia on motorbikes, circling the squares, beating those too slow to run. The richness of ACAB culture here is not difficult to understand. It is estimated that over 50% of the police voted for Golden Dawn, the fascist party who came third last election. Among Exarchia’s radicals then, despite the diversity of traditions, it seems like any politics that is not 100% anti-police and anti-prisons is seen as ridiculous.

Some Greek Graffiti on the wall reads, my friend points out to me: “ONE SLOGAN UNITES US ALL: COPS, PIGS MURDERS.”I lingered behind the bar, battling my sleeplessness with some ouzo. I chat with the bartender about prison all night. We talk about Alexis Grigoropoulos, the 15-year old, whose murder by police ignited riots on an unprecedented scale in 2008. I’ve started to realise that it is difficult to overstate what a turning point that was for a wide range of antagonistic political forces that came into being around this time. We also discussed Nikos Romanos, Alexis’s friend and pallbearer, imprisoned for unsuccessfully robbing a bank in 2013, and whose month long hunger strike the following year sparked mass solidarity actions. Much of Athens burned as he fought and won for the right of student-prisoners to attend university classes whilst in prison.

The conversation eventually turns to the Syriza themselves, and the ethics of engaging with power structures. A few weeks ago the finance minister Yanis Varoufakis and his wife were driven out of a small Exarchia restaurant by some teenage anarchists:
“They should be able to eat wherever they like, what the fuck, I don’t care-” said my host.
“I don’t want any representative of the state, of prisons, to feel safe in Exarchia-” replied her cousin, the bartender.
“That’s ridiculous!”
“This is Exarchia-”
“Oh come on! What is Exarchia? Some utopia. This is still a capitalist area, businesses everywhere-”
“That doesn’t mean we should accept a government here! We have to fight it always! Otherwise-“
“Otherwise what? Varoufakis will be able to eat here? I asked around and it sounds like those kids are idiots.”
“Okay fuck those kids whatever. Perhaps throwing glass is too much, I don’t care. Maybe just a few slaps would have been better.”
“Are we seriously debating this? If what – Two or five slaps is best?”

Unless you’re going to get up really early, it is a very bad idea to leave the house before midday – too hot – but I wanted breakfast with with my host, who was off to a ten hour shift inking Athenian bodies. I spent some time walking around, burning and lost. Urban Athens is the most densely populated area in Europe, including Istanbul. It is very much the ‘city of the Polykatoikia’ – close-knit skeletons of concrete slabs built from the post-war till 2004. They dominate rich and poor areas alike, although generally the higher up you are the richer. Such uniformity is difficult to navigate, but eventually I found myself on a highway at the foot of an arresting castle, massive, and painted entirely paddy green. All of the windows were boarded up, and its curvy spiked fences were adorned with barbed wire. I asked the car park attendant beside it what it was:
“It belongs to the hooligans. If they cannot go to the stadium, they come here.”
It was very well guarded: “Are you allowed in?”
“If I try go in…I’m not on their list.”
We then stood chatting in the sun for the following six hours. His story was an almost too perfect paragon of the Greek crisis: He worked long shifts, seven days a week, for €400 a month, and also in a factory at night for extra money. In 2008 he took out a loan for €35,000, he’d paid off €17,000 by 2010, then lost his job. As a result of late payment, they now want him to pay an extra €5,000 that he doesn’t have, so he no longer picks up their calls (whose frequency underscored our conversation). We discussed, amongst other things, Greek politics: “myself, I voted for the KKE…communists against the Euro…I think Tspiras is Papandreou 2.0…sadly us Greeks, we feel if we have Euros in our pocket, we are safe.”
The simple joys of life: “For example, when I’m sad I like whiskey – only bourbon you see – but, for me, if I’m there, with a small Tsipouro, some tax-free cigarettes from Lebanon, I am happy. Simple things.”
We discussed Anarchists: “I am not an anarchist because, you see, I vote, and though would not burn a bank, but I am happy they do. I respect other traditions.”

I arranged to meet somebody from the Void Network – who edited the seminal collection on the 2008 revolts We Are An Image From The Future – but was too late, and the chance for our meeting, for then, past away. Instead, I ran into Jerome, a founding member of the ROAR collective – a journal of the radical imagination – who are, in large part, the reason for my being in Athens at all. After the January elections they, to my surprise, asked to republish a blog I’d written about the culture of antagonism in Greece. As a fan of their website, I was ecstatic, and knowing nothing about Greece, surprised. Skyping with my only Greek friend, she said “at least visit if you’re going to write!”. So now I’m here trying to make a film.

A black-clad crowd gathered under a speaker playing tunes. I heard the demo was organised by the anarchists K*VOX squat collective, but there were a range of groups there, including some Leninists. The numbers were lower than expected because some thought the call out’s rhetoric was “too leftist and anti-imperialist”, which seemed an odd kind of sectarianism, but the Athenian sects are confusing. The people that were there were very militant. Once we started walking about 300 of the 400 Athenians stood gathered, donning black helmets, and pike-like sticks, in a tight bloc formation. The organisation appeared competent and experienced, as if it were from several years of crisis and revolt. So competent, I suppose, from several years of crisis and revolt.

As we marched by parliament there were disarmingly few police. Syntagma Square has been the site of many historical police vs. People clashes, many riots against police. But now, all the police hid in the side streets, looming ominously, but keeping their distance. There was a bit of an awkward mill about. Then the march continued to the German embassy. A riot bus was in front of it with one line of police, who stood back. We also had rows of riot police on either side. I asked Jerome:
“Do you think…we might all get beaten up? There’s not really anywhere to run.”
“Nah. Syriza wouldn’t let that happen outside the German embassy.”
It seems implausible that there was going to be no confrontation. The front line of the protests passed a pack of cigarettes between them. In a hushed voice I whispered back:
“Looks as if they’re having one last cigarette before a big battle…”
“Um, looks more like they’re just pretty hot in those helmets and need a break from walking. This is more like ‘revolutionary gymnastics’ than anything else.”
There was an uneasy atmosphere of latent violence mixed with mild absurdity.
“It must be strange” Jerome’s friend said “if your whole praxis is based on conflict with the police attacking you, and then, one day, they just don’t.”

For anti-state radicals Syriza’s victory is clearly an ambivalent development. On the one hand, it is definitely a lot nicer being able to walk about Exarchia unmolested by batons. One anarchist I met said before, whether to go on a demo or not became quite a weighty decision to make. On the other, if a more friendly state made the radicals less anti-state, then that would slightly defeat the movement. The character of this relationship will be defined more clearly soon. Jerome said I’d chosen a good time to make a film: “While you’re here you’ll either witness the largest default in world history or Syriza’s total surrender at the hands of the Eurogroup.”