Kanye West Sues Satan After Getting Nothing For Selling Soul 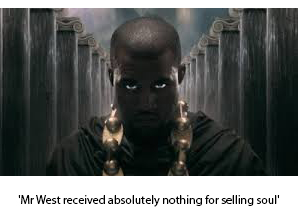 Kanye West, the world’s most mispronounced hip hop artist, has started legal proceedings against Satan after the deal to sell his soul ran into problems. Mr West, who is headlining this year’s Glastonbury Festival, is thought to be unhappy with his contract claiming he was promised exceptional musical skills after signing his soul away for eternity and that, obviously, up to now he has received absolutely nothing in return.Mr West mumbled unintelligibly from behind a mixing desk in an LA recording studio, ‘I thought me and the Chief had an understanding, Know wha’ I’m sayin’? Everybody do it these days. Know wha’ I’m sayin’? Only a fool who don’t want no Grammy don’t sell his soul to the Devil. Know wha’ I’m sayin’? I ain’t no fool. Know wha’ I’m sayin’? Uh uh. No way. Know wha’ I’m sayin’?’Owing to legislation established under the last Bush administration all American popular musicians are currently compelled by US law to sign their souls over to Lucifer. Kanye’s team believed it was essential for the development of their client’s career that he followed the same paths as other notable Satanist musicians such as; Nicki Minaj, Madonna, Jay Z,  Usher, Kesha, Katie Perry,  Robert Johnson and even good old Bob Dylan.Lucifer laughed from his offices situated at 1601 Pennsylvania Avenue Washington DC, ‘Ha ha. Poor Mr West. And the rest of them. Whoever would have thought the Devil would be a liar? Idiots! I gave more talent to that obedient little boy Ice Tea than all of them put together. Well apart from Mr Dylan but he had such a way with words. Though I still got him with that awful harmonica. As far as Kay… Key… Kya… (fuck it!) Mr West is concerned I don’t know what he’s complaining about? At least he’s got everything he ever imagined. To be a talentless dunce who can’t tuck his shirt in properly that makes an arsehole out of himself whenever he picks up a microphone and who’s married to the most vacuous woman on the planet. All I got was his bloody soul. With the way the secondhand soul market is looking these days you’d get more for an old dustbin bag full of nappies that’s been pecked open by the seagulls and has a hole at both ends.’

View all posts by Ethan →
This entry was posted on 28 May, 2015 in homepage and tagged current affairs, Ethan Harrison, Political comment, satire, spoof news. Bookmark the permalink.