Extract from ‘Autogeddon’
by Heathcote Williams

IN 1885 Karl Benz constructed the first automobile.
It had three wheels, like an invalid car,
And ran on alcohol, like many drivers.

Since then about seventeen million people have been killed by them
In an undeclared war;
And the whole of the rest of the world is in danger of being run over
Due to squabbles about their oil.

If an alien was to hover a few hundred yards above the planet
It could be forgiven for thinking
That cars were the dominant life-form,
And that human beings were a kind of ambulatory fuel cell:
Injected when the car wished to move off,
And ejected when they were spent.

NOT one huckstering copy-writer―
And they’re only a sheet of Letraset away
From badlands ballyhoo merchants spiking sugar with silver-sand
Or dying sparrows yellow and selling them as canaries―
Ever sees fit to mention that the automobile,
Even that moving Pantheon, the Rolls,
Doubles your heart-beat on entry,
And transforms your psycho-galvanic skin response
To set the needles shivering on any lie detector.

From the moment you settle comfortably behind the wheel―
Your pelvis fondled by replica flesh panting with static―
It increases stress readings, poultices the ductless glands,
Slowly marinates the body of even the most ‘experienced’ driver with adreno-toxins,
Noisily generates a wide range of cardio-vascular pressures,
As well as doubling up as a dinky orgone-accumulator stimulating trash sexuality.

Tides of blood and water in the body
Are magi-mixed, as if there was a permanent full moon.
The car is a portable mistral
Whipping up sumps of duff ions,
And moving them along in a packet of pre-storm tension.

‘Oh we had such an awful journey,
I feel completely drained.
Now what did you want to talk to us about?
My concentration’s utterly shot.
Why did we come?

FURTHER SPECIFICATIONS:
The machine re-vamps the energy patterns of the driver,
Bearing only a scanty relation to the work put into it:
‘Whoops, did we do something then?
Couldn’t have. We’d have felt it.

Like television,
The peculiar rhythm of the car
Sucks the brain-waves into an artificial resonance―
A managed and manageable attention span
The TV of travel.

Every car’s vibration
Magnifies an all-pervading impregnation of information-free sound-porn,
A universal base line, whatever the tune,
Transforming the brains of its audience into double-glazed mulch,
Their attention span whittled down to the length of a passing car.
The infra-sound,
Exuded by compressors in ‘air-conditioned’ (and air conditioning) models
Will deal with those who shruggingly claim to be unaffected,
As their cerebral pre-capillaries silently pop,
And turn into varicose veins.

Look out of any city window:
Cars will slice through your thoughts and take them away
For nothing.

Stand in any street
Bristling with painted piranhas
Playing the flatulent, whining muzak of stress,
And be forced to absorb their every wilful manoeuvre―
A mass-produced multiple sword of Damocles
Inexhaustibly hovers over every action.
Streets that were open universities,
Are now the open sewers of the car-cult.

But, if all this proves too overwhelming,
You have permission
To take it out on anyone you wish―
Including yourself―
With a relaxing impunity . . .

‘I’m going to democratise the automobile,’ said Henry Ford,
‘And when I’m through everybody will be able to afford one,
And about everybody will have one . . .

INTERCONNECTING roads, laid out like lattice-work,
Might sometimes strike a moderately subtle viewer
As a predatory web.

Skin-head architecture
Spawned by the dream of Autopia,
Edges in on no-man’s land,
Like short-life gravestones.

From time to time,
On the outskirts of cities,
Wreckers’ yards erect massive mausoleums of mouldering cars,
No longer worth requisitioning,
Picked fairly clean of their inhabitants,
Like Parsee Towers of Silence.

OIL.
From the Sanskrit root -il, light, illumination,
And petr, Peter, the rock.
Thus, petrol is―remarkably―light from the rock.

Oil,
Which, if the Chinese geomantics are right,
And this earth is a living organism
(And the atmosphere is obviously its own breath),
Could be its digestive juices,
Its cerebro-spinal fluid―
Or even its bile―
And it may one day over-react
To being caricatured as a handy Molotov cocktail,
Needled with two million bore-holes
By oil spivs.

Oil,
The liquefied,
If not spiritualised,
Transmutation of extinct lives:
Primordial kelp, crustacea, foraminifera,
Plankton, unicellular diatoms, marine protozoa . . .
The haemins and lipids of dinosaurs
And unknown mammals from the Jurassic―
Whose first extinction was clearly not enough
For this consumer version of ancestor worship.

Oil,
A secular sacrament
Whose price is regarded as essential to keep as low as possible,
Perhaps to divert attention from its true value,
And which, if the gurus of Exxon, Texaco, BP and the ‘Seven Sisters’ are correct
Is most properly exploited
When as many people as possible
Are incinerating as much of it as they can
For as trivial a reason as they can find,
To keep a continuous carousel of consumer offal on the move―
In an alfresco gas chamber.

MORE than twice the number in the death-camps,
A hundred and thirty times the kill at Hiroshima,
Eight times the count in Korea,
Two hundred and thirty Vietnams,
Eight thousand five hundred Ulsters . . .
The Hundred Years War in a week;
The Crusades in under thirty seconds.
A Black Death with bubonic rats on wheels,
A quarter of a million ‘auto-fatalities’ a year―
The humdrum holocaust―
The fast-food―junk-death―road-show.

Take any accident ward
Trying to service a few de-stocked slices
From the 250,000 a year
Wheeled in on stiff-scoops
To brain and body garages
By whistling ambulance men.

Lines of metal beds on castors―
A medical parking lot.
Sinuous tangles of drip-feeds
Fuel those who blended too urgently with vehicles
And make the room almost indistinguishable
From a cross-section of an automobile’s wiring system.

Multiple pethidine booster shots to jerk them into over-drive
Having turned their bodies into cribbage-boards.
The unreported wounded, the unreported dying
Vainly trying to kick their engines over.
Screams of honking agony from rows and rows of impatient, stacks of meat.

An attendant mops up blood-slick in the corridors twenty four hours a day
Watched by its donors
As they try to steer their minds back into any available space
Where the ‘accident’ never happened.

IN a riot, or a revolution,
It’s curious that cars―
Anyone’s cars―
Are always the first to go.

Traffic control is, for most people,
Their most intimate, and direct,
Experience of government―
As well as being one of its most seminal justifications:
‘Look, you can’t do without some form of organisation,
I mean, take something basic like roads . . .
You couldn’t just have everyone driving on whichever side of the road they pleased.
Things would be chaos.’

But a vandal,
If he/she ever risked losing pace
By politicising themselves
Might feel
That since no one voted for the car―
Rubbishing them requires no referendum . . .
Besides which,
Slashing their tyres,
Pouring sugar into the tank,
Shoving potatoes up the exhaust―
So the wiring implodes and blows off the manifold―
Sloshing brake-fluid onto the body-work,
Topping up the oil with valve-grinding paste,
Placing upturned plaster-nails under stationary vehicles,
Turning cars over like wood-lice,
So that the petrol spills out onto the road,
And they can be fired . . .
Might keep a few hunks of human flesh
Throbbing with life for a little longer

Rome went mad with lead pollution.
It was Vandals who straightened their pipes 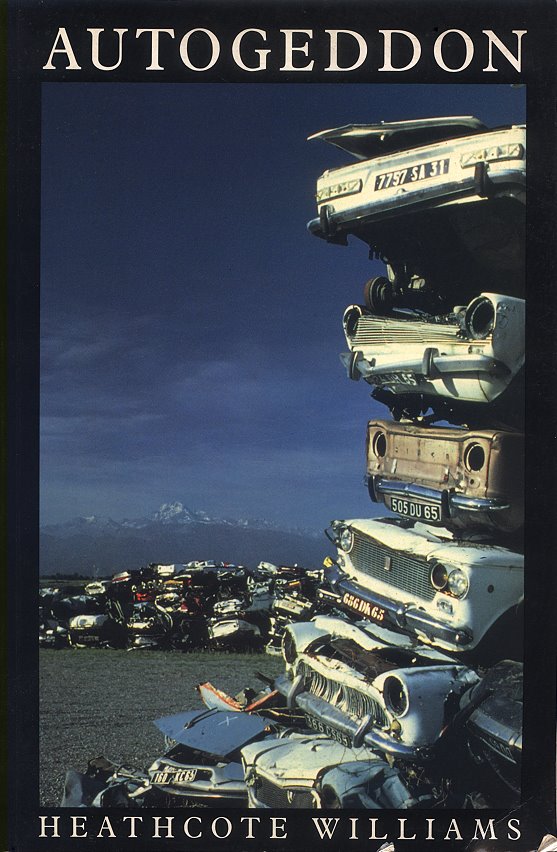 One Response to Autogeddon (revisited)