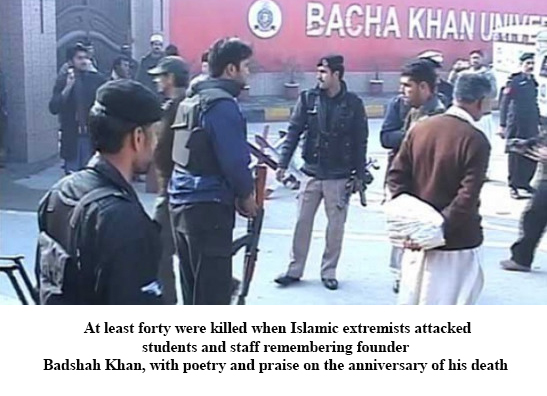 ‘The men with guns have become the prayer experts’

Starting with his own tribe, the Muhammadzai,
And using empathy rather than fear,
Ghaffar Khan persuaded the warring tribes
Of the North West Frontier Provinces
To give up every weapon they possessed.
“You do not kill the soul that God gave sanctity to.
“The Qur’an tells us that killing one person
“Is like killing all humanity.”…

…Ghaffar Khan also drew inspiration
From the Buddhist stupas and monasteries
Which, as a child he’d been told by his father,
“Had housed a peaceful people”.
And later he would say, “Look how deep
“Has been the influence of Buddha in these parts.
“We were all Buddhists once.”

And he would meditate on the Buddha’s injunction:

“Hatred does not cease by hatred;

“This is an unalterable law.”

Ghaffar Khan directed the tribal peoples
To what he called
“The finest weapon of the Prophet”,
Namely “patience and righteousness”.

“That such men,” commented Gandhi,
“Who would have killed a human being
“With no more thought than they would kill a sheep
“Or a hen should, at the bidding of one man,
“Have laid down their arms
“And accepted nonviolence as the superior weapon
“Sounds almost like a fairy tale.”

Ghaffar Khan preached a revolution of the mind –
He believed that nonviolence transforms
And empowers the human personality
And he so captured people’s imaginations
That he was able to raise an army of no less
Than 100,000 nonviolent soldiers…. 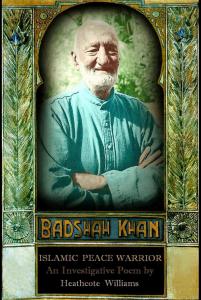