Back and Ready to Go 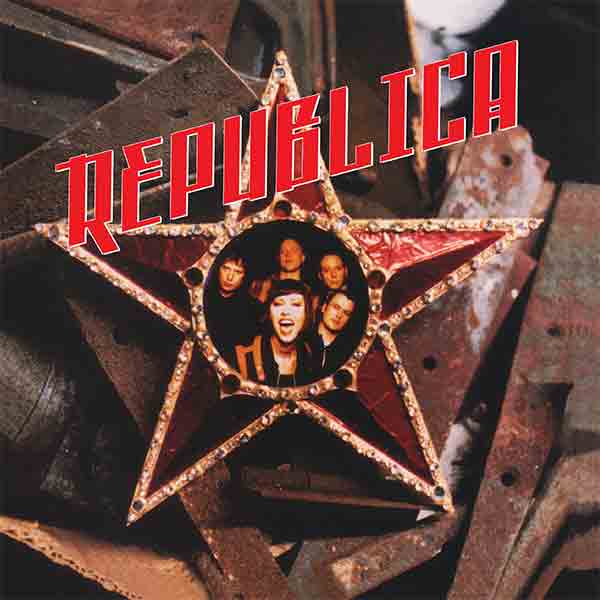 There are two bands I always think of as deserving more acclaim but that met a similar fate: Transvision Vamp and Republica. Both had hit singles, both were hyped, both had striking and outspoken female singers, both in the end fell from view. Critics turned on Wendy James from Transvision Vamp as she desperately got more and more outspoken and provocative, wearing less and less clothing as she did so. On the other hand, Republica just seemed to disappear until a 2008 reunion.

There’s little similarity truth be told, it’s just me. Transvision Vamp kicked off in 1986, Republica didn’t get together as a band until 1994 by which time Wendy James was trying to ignite a solo career, which she continues to the present. According to Wikipedia, Republica are ‘alternative rock’, which I suppose is fair enough, but they seem more new wave or pop to these ears, with keyboard and guitar foregrounded on both their albums. The press release accompanying this reissue says ‘technopop’ which is better, except they’ve really gone overboard for the techno side of things, with a plethora of dance remixes and variations.

‘Ready to Go’ is the star of the show of course. It got released in two different versions and charted on the back of a guitar rather than keyboard version, accompanied by a high speed video which still gives me a headache when I try to watch it. Zoom overload! The other hit single is ‘Drop Dead Gorgeous’, an anthemic song hung on a big beat and lead singer’s Saffron upfront vocals and pouting delivery. It was apparently a dance floor favourite and also No 1 Gay Anthem Club Record Worldwide.

To be honest these are the two stand-out tracks in a fairly ordinary album. As a stand alone debut it’s good but not that good, but now it’s accompanied by 32 bonus tracks, including Republica’s debut single and numerous dub and remix versions. These apparently constitute ‘a riotous roller-coaster ride through cutting-edge 90s remix culture’, but to these ears they simply dilute the album and turn some stunning songs into unfocussed and repetitive sonic assaults. I actually have a CDR containing several mixes and versions of ‘Ready to Go’ but strangely enough they don’t overlap with this reissue except for the original versions. Very confusing…

Anyway, mustn’t complain. Cherry Red are superb at repacking and reissuing stuff, and have diligently collected up all the bonuses for this bargain-priced set. Old farts like me will enjoy the original album and singles in remastered clarity, whilst the hipper among you will delight in the banging versions brought to you by Hard Kiss, Drum Club and the Chemical Brothers. So, we all win.

View all posts by Rupert →
This entry was posted on 9 May, 2020 in homepage and tagged Back and Ready to Go, Republica, Rupert Loydell. Bookmark the permalink.