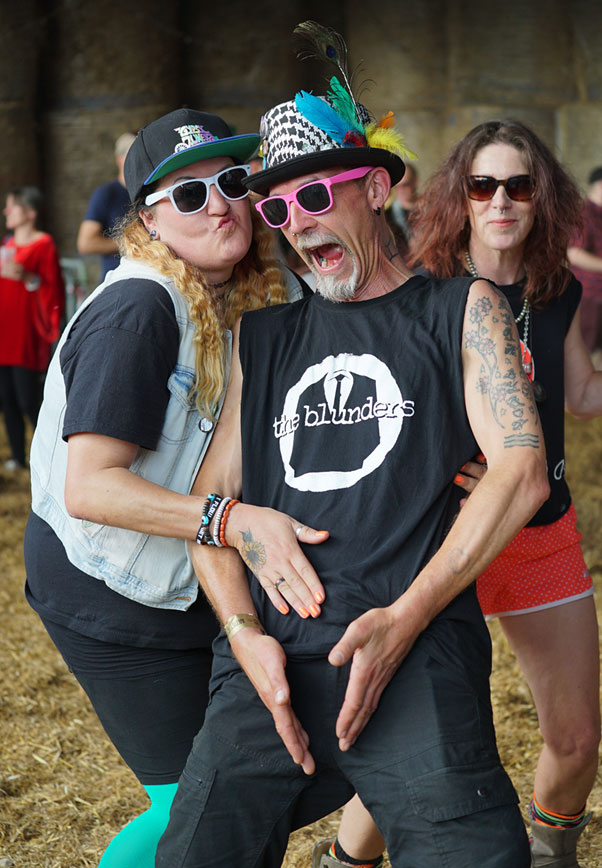 Barnstomper: A music, beer and cider festival in Dorset’s quirky Cerne Abbas. Home of the Giant…

Alan Dearling is full of fun-filled joy (and a bit of residual mayhem), after four days back in a festi-field:     “Whaahaaaay!” 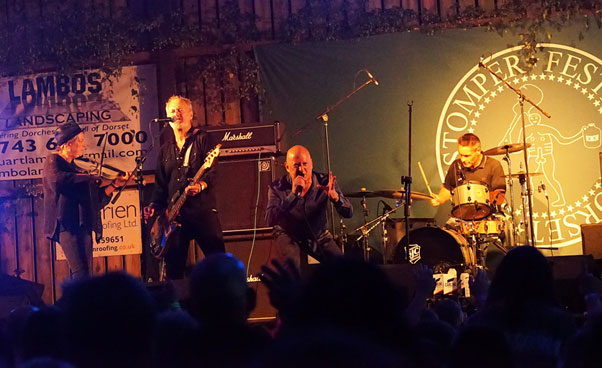 To get in the mood, here’s the Barnstomper 2021 crowd kicking up a storm to The Cropdusters’ ‘Jammit O’Reilly’:

‘Tis time to remind ourselves how much that music festivals mean to us.

This really was a rather amazing event: Barnstomper 2021. It was a ‘first’ for the organisers at Cerne Abbas Brewery. Think: fiddles and banjos, punk, hops, malt, apples, jigs, pogo-ing and much more. It was also the first opportunity for loyal fans, since the band ceased playing in 2011, to revisit the high-octane musical magic of The Cropdusters. This was a seven-piece version of The Cropdusters headlining for this inaugural reunion occasion. It provided a resounding, seething mosh-pit of a climactic, festi conclusion – a genuine barnstomper hour and a half! 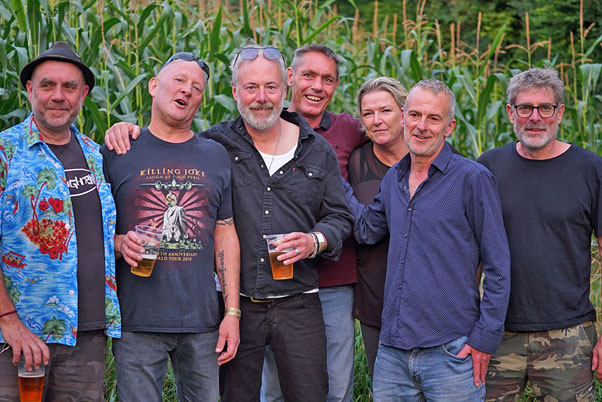 The main stage was constructed inside a large, open-sided barn and a second outdoor stage was provided by the Convoy Cabaret. It’s a travelling stage, and fitted well with the do-it-yourself, community ethos of Barnstomper. This was much akin to a large village fete, with camping, music and a really good bar, supplied with plenty of beers from the award-winning, Cerne Abbas Brewery (situated all of ten metres away), plus a nice range of ciders and wines. And, importantly, fair prices, smiling, friendly bar staff and lots of other, slightly bonkers festi-people to dance and fall-over with. That’s got to be a ‘result’, especially for the many festival-starved punters who came to party under the mystical spell of the phallic, Cerne Abbas Giant! 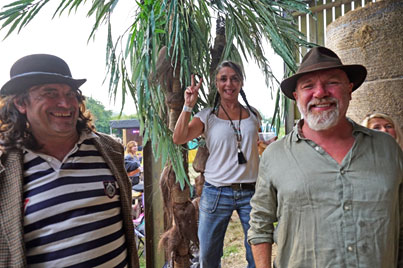 Lots of local punters had friends and family members playing on the two stages. Stewards came from nearby Dorset villages and towns and from further afield. Many of the wider stewarding team and helpers, together with band members, are part of the ‘extended’ festival ‘family’. A travelling, sometimes international community. Indeed, one boat-builder, Andy (right in the pic), an old-time Lymington Dusters’ fan, travelled to Cerne Abbas with his wife overland all the way from Nice in France, in an old Royal Mail van complete with a Lambretta scooter and trials bike.  It is a festival of people – for the people. Festival-goers looking after each other and the local environment. Picking up rubbish, re-cycling, celebrating being together and celebrating life creatively. Particularly important in a rather middle-class, traditional Dorsetshire village. But, quiet it wasn’t! Swashbuckling, more like it! 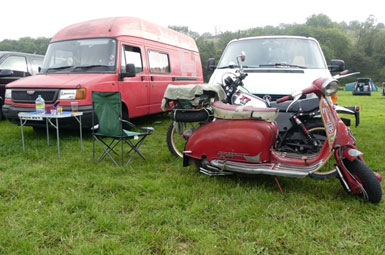 Barnstomper is a nice new addition to this family of, and style of, events and festi-people. A mini-successor for many to the late-lamented Endorse-it-in-Dorset festival (EIID). That was always one of my absolute favourites. EIID was responsible for Ladies’Day and Scrumpy Sunday (where most of the guys transformed into the ladies they always wanted to be, and apples were consumed in more than five-a-day quantities by most). Maybe that idea will be revived for future Barnstompers? 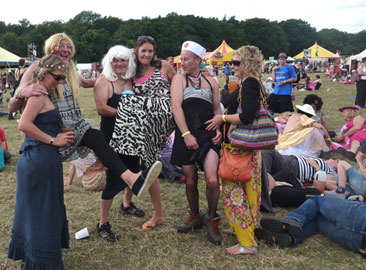 In fact, the friendliness and kindness of strangers was the essence of the festival. A mix and match of music and booze was part of that tapestry. For me it underpins the difference between commercial festivals and ones created and curated with love.

Barnstomper acts perhaps fell into four categories: (1) Fiddle and banjo cow-punk and Hillbillies, (2) Acoustic and semi-acoustic acts on the second stage, (3) Rock and old-school acts, and (4), the slightly less-usual. In this fourth category, I would mention the two outliers, Friday headliners, CoCo and the Butterfields, and Saturday afternoon’s maniacs, Monkey Bizzle. 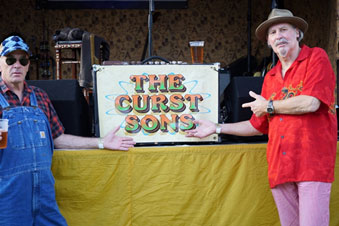 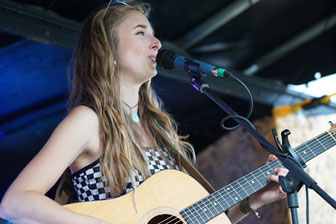 CoCo and the Butterfields are a relatively ‘commercial’ band. Perhaps reminiscent of KT Tunstall and later-version, Fleetwood Mac. Classy, indie rock songs, great singing and presentation. They look and sound really polished and professional. It’s surprising that they’ve not yet ‘made it’ onto a major music label. 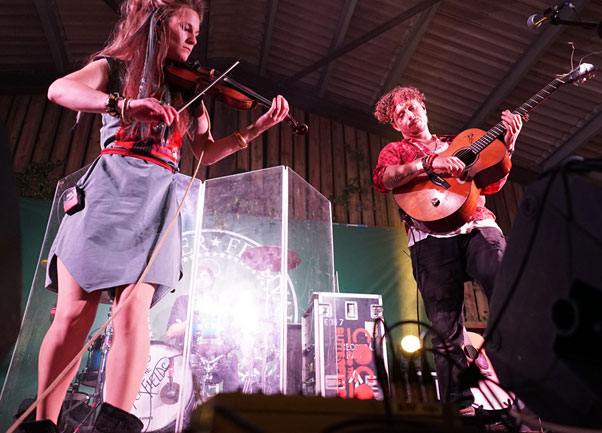 Lots of memorable songs.  I suspect that with luck and the right management, they are on the cusp of breaking into the next musical league, though they have already performed at venues such as the Shepherd’s Bush Empire… I wish them luck!

“Bonkers”, definitely comes to mind in connection with Monkey Bizzle! At Cerne Abbas, they found their disciples leaping about the straw-barn-dance-floor. ‘Idiot Music’ is their newly released album. Cider firkins full of catchy, slightly naughty, rapping, anarchistic songs. They remind me of Dr Splink and many of the 80s/90s new Traveller bands. Edgy and a bit confrontational. Nice Nutters, lots of laughs, a punk/rapping-crusty-Madness? Sing-a-long songs like, ‘Noisy Neighbours’, ‘Cider Cocktailz’ in a pint glass (with cider and gin, and rum and um, sambucca…derrr), and ‘Idiot Music’ …for stupid people, idiot music for ridiculous people…like some of the Barnstomping Crew… Kind of sums them up. 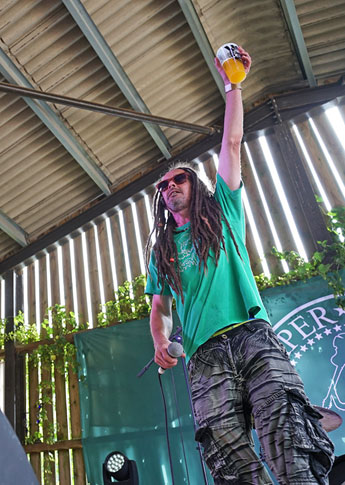 ‘Oi Mate’ is a lovely little street ditty: You’ll get it back, mate!

And so, for me, time comes to say a few words about The Cropdusters. In my addled brain, the Cropdusters are the central crew in the midst of the Lymington music scene – the Peeping Toms, Pronghorn and the Dusters. Back in 1986, they headlined at Amsterdam’s Melk Weg, with The Levellers as support. They nearly-made the Big Time and their songs are truly memorable. I do miss Cob Cook, the original fiddle player, who sadly died of a heart-attack. 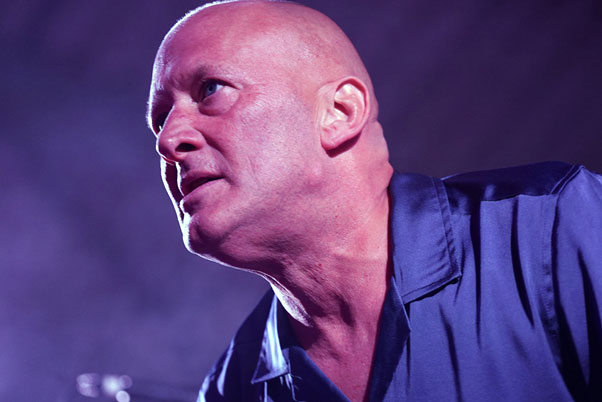 But, the new line-up Cropdusters did the songs justice. Energy in punkish, welly-fulls! You’ll have to hunt out their music for yourself – but ‘Banjo Hill’, ‘Just poppin out to fight a war’ are stompin’ anthems…live, they offer up a truly intoxicating mix…Here’s a video from 2006 of ‘Banjo Hill’: https://www.youtube.com/watch?v=43PkP66xDmk

Mike Case, bass-player from the Cropdusters, remembers the post-punk music scene in Lymington in the mid 1980s and the formation of the band (recorded over a few pints in the Giant pub in Cerne Abbas, 2nd September 2021): https://vimeo.com/manage/videos/606343328/privacy 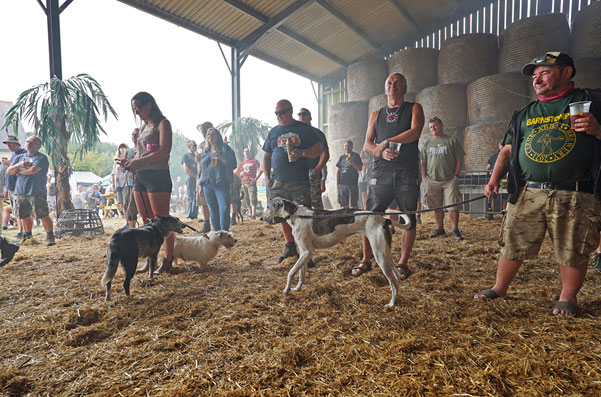 All in all, Barnstomper was a fabulous small to medium size festival. Long may it run… If there are any ‘learning points’ for the organisers to consider, they are relatively minor, but probably worthwhile a bit of thought. (1) If very wet, would the campsite in the farmer’s field become a soggy bog? (2) Should the musical styles become more diverse, and include ‘dance’ – to be discussed? (3) There need to be a wider range of food and coffee outlets, especially for campers. (4) Could a Sunday programme be included? 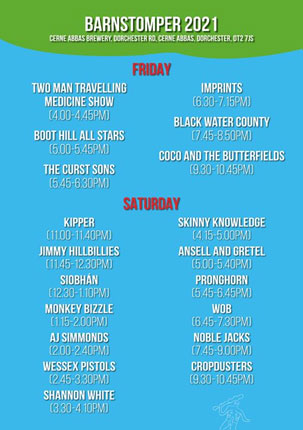 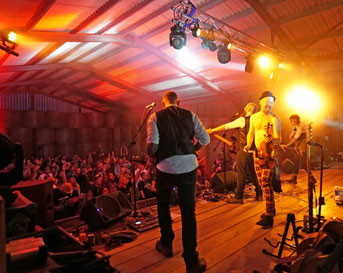 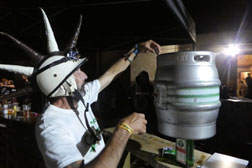 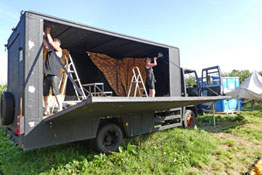 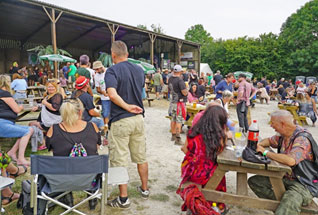 A few more people and the vibes from Barnstomper 2021. 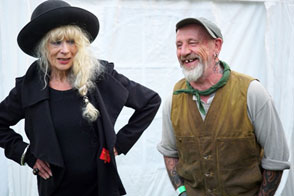 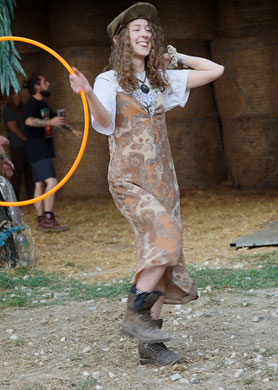 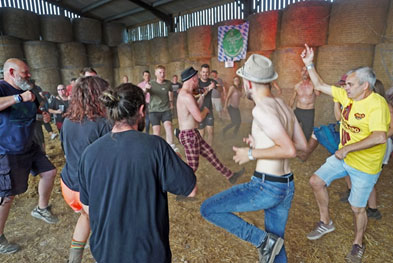 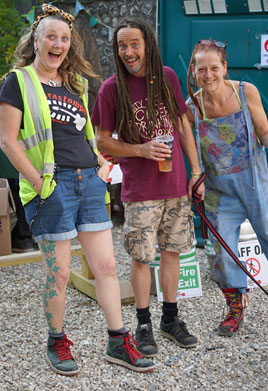 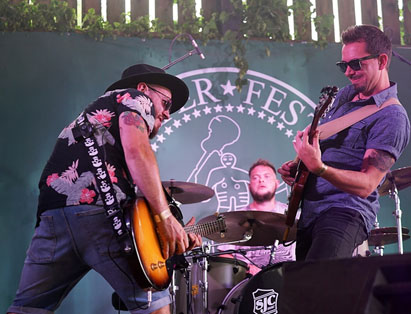 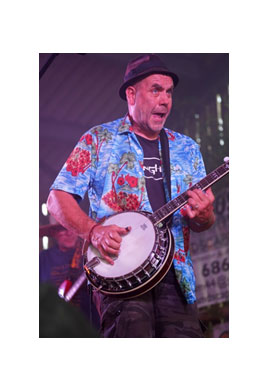 Tweet
This entry was posted on 25 September, 2021 in homepage and tagged Alan Dearling, Cerne Abbas. Bookmark the permalink.