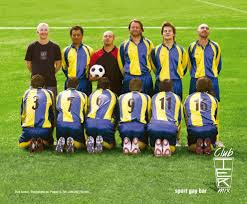 BBC chief’s decrying new statistics currently numbering actively homosexual people in UK professional sports at 1.5%, in line with average levels in society, are promoting the idea that 50% of all UK sportsmen and women should be gay by 2022. Whilst the eradication of discrimination within sport has been universally welcomed, there has been blow back over some new BBC policy initiatives, which suggest that numbers of gay sports people would be dramatically increased should special subsidies including free goals or points or money and other incentives be awarded to those who have ‘come out’ in their respective sports.

Tammal Dextron, in charge of equal opportunities within sport at the Beeb, said, ‘Everyone knows that it is a lot harder being a gay sports person than straight so logically it would be fair to reward these people for their sexual orientation by awarding them particular advantages, such as free goals or points or training and money. For instance, if Wayne Rooney came out as gay he could start next season with five free goals. In this simple way we would gently encourage people not to hide their sexuality. Though our attention would not just be with football and would include all sports. For example, if Andy Murray left his wife and got a boyfriend, he would get enough free points to win against Novak Djokovic.’

Gay Welsh rugby player Gareth Thomas said, ‘What are the BBC bloody playing at? They have totally dropped the ball again. Don’t they know there is such a thing called positive discrimination? This is exactly what we don’t want and, in my opinion, smacks of an alternative agenda. Next they will say that gay sports players will have to wear rainbow coloured strips and that any one who tackles them is a homophobe. Ridiculous.’

Jun 30, 2015 – Fred Smoot says “no one cares” about the gay players in NFL … In a team sport, it’s best to be discreet about your personal life – gay or straight.

English footballers and fans will end the stigma around gay players …

Oct 27, 2015 – The news that two Premier League players may come out is no longer shocking. … It’s the story that won’t go away, yet the reaction of football fans is not one of hostility, but weariness … Replies such as “Who cares? ….. As a supporter of a team in the lower leagues of UK football I guess there will be the …

MailOnline US – news, sport, celebrity, science and health stories …. One in six of all on-screen BBC roles ..

View all posts by Ethan →
This entry was posted on 19 May, 2016 in homepage and tagged current affairs, Ethan Harrison, politics, satire, Social commentary. Bookmark the permalink.