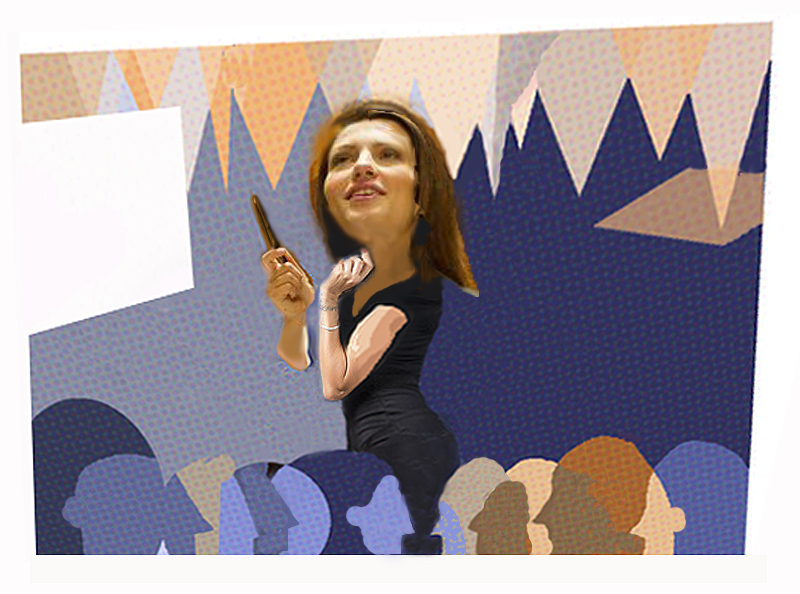 Very high heels, I note; calves straining in flesh coloured tights.  The well-strung bow of her body drawn to release her PowerPoint.  And that little black dress!  At eleven in the morning?  At a Balliol seminar?  Or the Bees and Trees facilitating session, as she calls it. ‘I’m Karen,’ she says, looking nervous, for despite her Masters degrees in Creative Entrepreneurship from both Oxford and Harvard – this is her first performance in the heart of the beast, Oxford. She smiles at her captive audience, or rather an audience that has been captured – by funding assessors and the like.  I know they, like me, have all been sent here.

She flicks on her PowerPoint, changing the images with a flick of her wrist like an angler casting a rod: Image after image of smiling humanoids in their contextual situations.   Some wag in the row behind me mutters ‘power corrupts but power point corrupts absolutely ho ho.’ I turn my head, it is the elderly judge in his weekend leisure wear of casual white linen jacket and ironed jeans. (We’d all peered at badge labels during registration, balancing our teas, coffees and Danish pastries).  I know that Karen hears this too, and I notice the Rescue Remedy phial poking from the top of her open Louis Vuitton handbag on the floor by the lectern.

The younger academics and NGOs will enjoy it, I think, so will the sprinkling of women from the charity sector – although the woman from the Left Book Club – gaze focussed, biro poised, might be a toughie.   It is the judge and don (in tweeds) sitting together that really intrigue me.  The don, I had noticed was from ‘Classics.’   Are they Bees or Trees?  I wonder.  They’d probably been infantalised by their public schools, so this shouldn’t bother them too much.   To do her justice, Karen looks nervous. They would do her justice.  Wouldn’t they?  Wouldn’t they pity her?  Be kind enough to know that she had been sent here as much as they had been?  Each a captive of neo-liberalism?  That they, the old guard, know that these are the coming people, people that organise seminars called Bees – opinion formers, movers, shakers, activists – and Trees – the rooted institutions awaiting their fertilisation.   I guessed that if they were to hang onto their committee positions, quangos and funding they would have to sit through a lot of this sort of thing.  Needing to be in the loop, as it were.

And so, on with the PowerPoint, to share – not tell – the ins and outs, twists and byways of creative entrepreneurship.  She shares about new tractors and pumpkins in Illinois, and the job losses – sadly.   The artist Cristo’s community relations with prairie farmers as he’d wrapped an entire 100 mile fence in plastic sheeting, wrecking bemused cattle breeders’ boundaries, sadly.  (She says sadly a lot).

Divide the pie – But expand the pie.  She shares shrilly.  Most of us shrug at this, including the judge and the don – as neither law nor Classics can help them with this one.   That ‘beyond the coin lay ethics,’ she tells us (all sharing spent for now).  That ‘your rivals in negotiation, whether it is for your job, land, livelihood or money, have feelings too, a Point of view –  the centre of their own universe.’  That ‘beyond the coin’ lay these priceless human considerations.

But avoid, at all costs, she shares, the diversion of the HUMANITARIAN. That was for another of her clients, G4 security to ponder. They were Bees and Trees. For people, barely alive, lay well beyond their coin. In fact they lay in Manu, just off the Australian coast  – and she and her ethical entrepreneurial business had trained its Senior Management Team. And they in turn had trained hundreds of unemployed Manuans  – men and women – in a spirit of equal opportunities – to be prison guards.

‘But that place is a refugee holding place, is it not?’  barks the judge, without even putting his hand up.

‘Well, yes, but holding places have to hold them,’ she parries.

Sneaking a look at her Rescue Remedy, she then utters the most dreaded eight words of any training seminar.

‘I want you to turn to your neighbour.’

‘What?’ mutters the judge, flicking a lizard eye at the don.

‘Eh?’ says the woman from the Left Book Club, waking up.  Everyone groans inwardly, a few emit one, but all duly turn to their neighbour with querulous expressions.

‘I want you to arm wrestle,’ she says. ‘The trick is to get all of your knuckles touching the surface of the table at the same time, in front of you, so that you all win.’

‘Impossible,’ says the woman from the Left Book Club, looking at me, hoping, I can see, that I will be her partner in this management caper.

‘Sort your own funding out,’ says the judge, as the back of the don’s hand crunches against the desk.  But the woman from the Left Book Club and I laugh so much, our knuckles are too weak to care.

View all posts by Jan →
This entry was posted on 23 February, 2019 in homepage and tagged Claire Palmer, Jan Woolf. Bookmark the permalink.