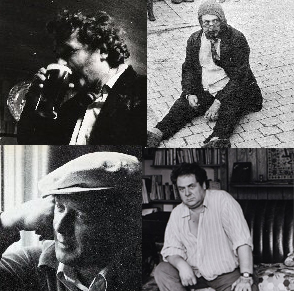 And, of course, that is what all of this is…all of this: the one song, ever changing, ever reincarnated, that speaks somehow from and to and for that which is ineffable within us and without us, that is both prayer and deliverance, folly and wisdom, that inspires us to dance or smile or simply go on, senselessly, incomprehensibly, beatifically, in the face of mortality and the truth that our lives are more ill-write, ill rhymed, and fleeting than any song, except perhaps those songs…that song, endlessly reincarnated – born of that truth, be it the moon and the June of that truth, or the wordless blue moan, or the rotgut or the elegant poetry of it. That nameless black-hulled ship of Ulysses, that long black train, that terraplane, that mystery train, that Rocket ‘88’, that Buick 6 – same journey, same miracle, same end and endlessness.’

Jeff Nuttall is in the Everyman Bistro expounding on the sacred beauty of obscenity…whirling like a fat spinning top, drunk on elderflower and brandy…

He recites the alphabet like a gutter priest, blasting out particular letters with startling emphasis –

All the way through the alphabet, relishing all the letters that make up an obscene word…

We are getting rather drunk with Jeff Nuttall. Even though we have only known him for an hour he is incredibly affectionate – hugging us, treating us like old friends.

Until a man sitting at the next table takes exception to Jeff’s language and asks him to tone it down a bit. Jeff is getting rather loud. Alcohol is spilling from his mouth. He is sweating like an animal; I think he might be frothing at the mouth. And then the man at the next table hits him. Lamps him one. Jeff is laughing like a maniac, loving his bloody nose. We try and get him to sit down, to calm down but he is thoroughly enjoying the whole experience. And when it’s time to leave he hugs us all, hugs the man who punched him and wanders off into the night, the happiest man in town.

Jeff Nuttall is transforming into Kurt Vonnegut. He is standing in a bomb crater in the middle of the Everyman stage, sometime in the 1980s. He sits writing Slaughterhouse Five on a battered old typewriter, sleeves rolled up, smoking and drinking Jim Beam. As he writes he speaks:

‘All this happened, more or less. The war parts, anyway are pretty much true. One guy I know really was shot in Dresden for taking a teapot that wasn’t his. Another guy I knew really did threaten to have his personal enemies killed by hired gunmen after the war…’

Jeff Nuttall IS Kurt Vonnegut. He has become him before our very eyes. Slaughterhouse Five is one of my favourite books and now it is making me itch to write a play. In the bar after the show I go up to Jeff and tell him how great it is to see him again and how much I loved his performance. He has no idea who I am.

I am sitting in the basement of the old Art School on Hope Street. I am writing about Jeff Nuttall in a building where Jeff Nuttall used to teach. I wonder if Jeff Nuttall ever sat at this table. There is a photograph of Jeff Nuttall on the wall and I wonder if I am turning into Jeff Nuttall. Any minute now I will be whirling like a dervish, reciting the alphabet and relishing the letter C…

‘Underground, in the brothel and the speakeasy, jazz incubated for forty years. The established society knew about it as it knew about sex. It confined mention of sex to the curtained room and the lavatory wall and there imprisoned it as a secret. But the world’s youth grasped this ethos like drowning creatures, rushing towards hip as their parents were rushing towards the merciful oblivion of death.’

Jeff Nuttall’s ghost is skulking down Hope Street, head full of jazz and anarchy. He is holed up in the War Office of The Cracke, spouting the words of Bob Cobbing, Eric Mottram and Old Bill Burroughs. He is Mister Punch, Max Miller, he is Puck and Falstaff; he is the anarchic spirit of revolution and the poetry of blood. I am looking for Jeff Nuttall’s ghost and I can hear him yelling in the Liverpool night…

In 1973 I failed to get into Liverpool School of Art. This was my only ambition. Instead I went hitching around Europe and became a squat dwelling poet in the old warehouses of Amsterdam. One night I went to see Alan Ginsberg, Gregory Corso, Jack Micheline and Jeff Nuttall reading and I wanted to go up to Jeff Nuttall buy him a glass of elderflower wine. But I’m too scared. I have my copy of Bomb Culture in my pocket and get to speak to Gregory Corso instead…At 2pm in the morning I catch a glimpse of Jeff Nuttall urinating on the war monument in Dam Square. That’s good enough for me…

In Atticus books shop at 43 Hardman Street William Burroughs is signing books…Meanwhile in the Cracke Jeff Nuttall is doing his crossword puzzle in The Times. He’s drunk – of course he’s drunk – and he yells out to no one in particular, ‘8 across, dinosaur, 11 letters.’

‘Triceratops.’ I say to him. He looks at me with contempt.

Jeff Nuttall is dead but his ghost haunts this very building.

And Jeff Nuttall said this:

‘Let’s not wait for those cripples in the administration to hand out money or land, and let’s not wait for them to grant us the future that they owe us. They won’t. they can’t. Let’s start thinking in terms of permanence now and build our own future.’

from one century to another..

One Response to JEFF’S BRAIN