The Annual General Meeting of a
Medium Sized Firm of Accountants

The theatre is dead on its feet. Or if it isn’t its stance has become monolithic; stone fed, it stands heavy, cast by a celebrity glaze. It is a closed structure and made for those beneath to give worship. And yet it will not admit them. They are only there to adore. To look at each play like a film, frozen by fame and false glory, or as a piece of art too expensive for anyone committed or keen to quite touch. It is a hulk made of straw but the stuff is dense enough to secure it. And so it stands, a vast totem, tightening earth, crushing ground. And yet at those feet a new earth is already in flower, and fresh shoots are bidding to try and replace that lost step. Just one of these buds found its light at Northampton Playhouse on Friday 4th November 2016 when the Northampton Arts Lab presented their second theatre play, THE ANNUAL GENERAL MEETING OF A MEDIUM SIZED FIRM OF ACCOUNTANTS.

Coming hot on the heels of their first show ARTMAGEDDON and under the direction, leadership and artistic and technical mastery of Megan Lucas, the show was something of a triumph. Written by NAL group members including Megan Lucas, Tom Jordan, Tom Clarke, Michelle La Belle, Josh Spiller, Jess Fowler and yes, your very own and actual Alan Moore, the seventy minute play was a mix of artistic anarchy, technical accomplishment and more importantly, humour of both the brightest and blackest sorts. Compiled by the Arts Lab over a series of monthly meetings, the play charts the fantasies and consequences of those desires for the medium sized firm of accountants. From the IT guy’s email courtship of the lovely and strangely unattainable Holly, (played by Stephanie Humphris), to Tim Burr the Desk Lover’s physical and mental commitment to his four legged paramour and penile saviour, through to the Boss’s strangely schizophrenic wanderings between sexual states, this group of low level financial servants aspire to some of the skies darker stars. At one point one of the accountants, Walter (played by Dalen Lewis with admirable restraint) turns into a watercooler, so innocuous and unobtrusive is his presence and yet his desire to serve nevertheless achieving its ultimate fulfilment. A new apprentice, Nickbert Teslastein, played with wondrous invention by Sonny Drake, holds court in a stunningly inventive monologue by Michelle La Belle on the powers of numerology and the binary code and of how his Grandmother shagged everyone from Nikola Tesla to Albert Einstein, as this and other pieces ignited their own forms of electricity.

The compact black box fringe space of the theatre allowed these dreams greater prescience and the smallness of the theatre enabled the rapt audience to watch the play transform into the best television show it ever saw, as projections of emails, statistics and film clips illustrated the various points and ideas. The first half concludes with a rousing song from chief focus, Seth Lopod (written by Tom Jordan and composed and played on ukele by a woollen octopus masked Roswell Blake and sung by Samuel Jones) in which his desire to be one with and indeed wank with a gay octopus is the only possible means of his escape from his uninspiring trollop of a wife who is clearly holding him back from his sperm driven swim to the heart. There are not many plays whose first half concludes with a slender man of asian origin being blasted by the produce of an octopus cock and this is intricately worked up to by Lopod’s fish based lunches. Let Mark Ravenhill continue to shop for lurid illustration, the Arts Lab has bettered the deal.

The second half broadened to take in the pyschologies of these dampened protagonists (quite literally in Lopod’s case) and was still reeling from Lindsay Spence’s standout performance of the Desk lover’s declaration of love, sex and connection with nature (again penned by Michelle La Belle), but it also contained the evening’s real gem, a five minute film piece of Alan Moore in the somewhat expected role of God, project Manager and creator of the universe, brokering a deal to pacify and/or appease Kim Jong Un while dealing with the existential agonies of Morgen Bailey’s shunned Leticia. Artfully filmed and treated by Megan Lucas’ technical Wizardry, Alan’s halo glimmered and bolstered above him as he talked of the illusion of reality, the inadequacies of the TV show Lost, ‘Fucking rubbish. That’s fifty hours of my eternal existence I won’t get back!’ and how resembling Captain Birdseye in a frock is not what any monotheiastic deity should have any right to expect.

Jess Fowler appeared in a self written monologues as a health and safety officer and as a cleaner penned by Megan Lucas, both characters trying to calm things over, just as Josh Spiller’s ingenious IT contributions sought to unravel them, and all in a tightly woven package, courtesy of the polymathic M. Lucas, who worked her own magic across wires, forms, digitalisation, all on a laptop with at least four keys missing. This play was a stunning piece of theatrical invention that left its audience enthused and enraptured. Poignancy was supplied by a final monologue written by Tom Jordan in which Ann Onymous, a lonely office lady, sensitively played by Michelle La Belle and even more passed over than Morgen Bailey’s disappointed Leticia beautifully encaptured the solitude and sacrifice that lays at the heart of modern office life.

Although well discussed, planned and formulated the rehearsal time was limited to the point of virtual non existence on the show. The NAL are not professional actors, they are artists, writers, teachers and architects, but they are all the better for it. They are free of the pressures, constraints and limitations of the professional theatre, while being imbued with the appropriate sensibilities necessary to mount a work of this sort. It always helps when there are intelligent people on the stage and of course talented ones, who understand that to be self serving is not the issue. The play is the thing in the more conventional sense, but beyond even that, is the idea. The intention. The word. The poetic to be expressed and the enlivening image. These are the aspects that matter as they seek to challenge and of course entertain. And so, calm prevailed and the ship sailed effortlessly on, loaded as it was with more ideas than any of London’s most popular plays of the day can come up with, and with as many mixtures of artistic endeavour on board as you could ask or expect a wayward parrot to crap on. It was what all theatre should be, an adventure of the purest sort. Transformative, elucidating and enlightening in its own way and on its own terms. The production has not been filmed so it lives on now in the memory of a hundred people packed in on a Friday night in a place described by Alan Moore as the Centre of the Universe (Northampton).  It is hoped that it sails again across blander waters, spilling its seed and tainting the faces of all who bare witness. May that be you reading this and others like you. Open your mind is what the wind will be calling and as a delighted smile plays and follows, these hardy sailors will want to come on your face.

It is the body applauding. 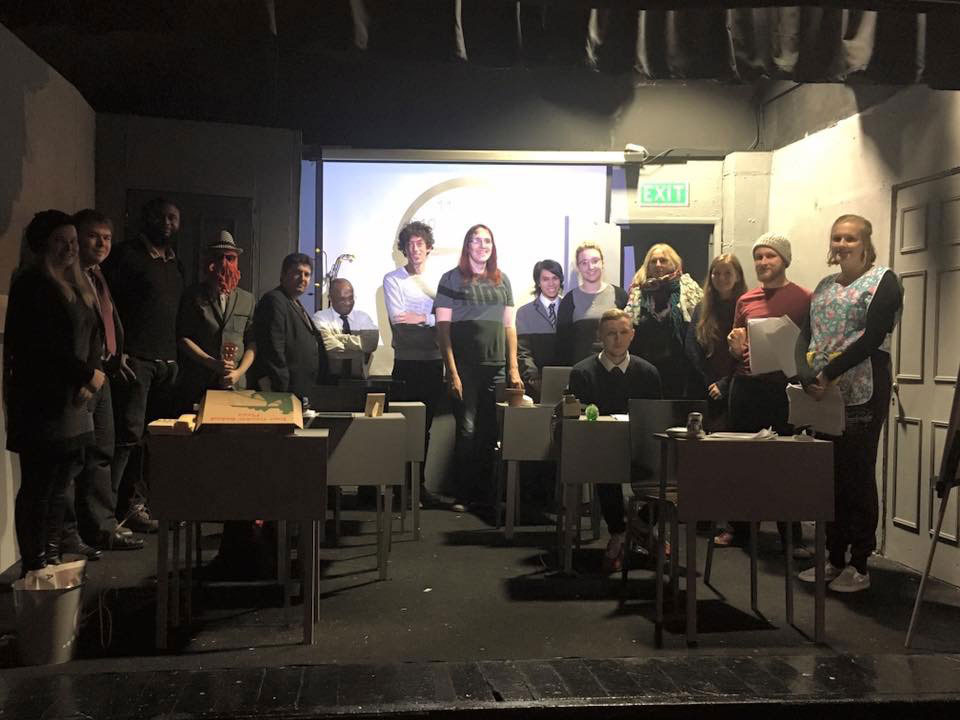