CETA: Playing With the Politics of Power 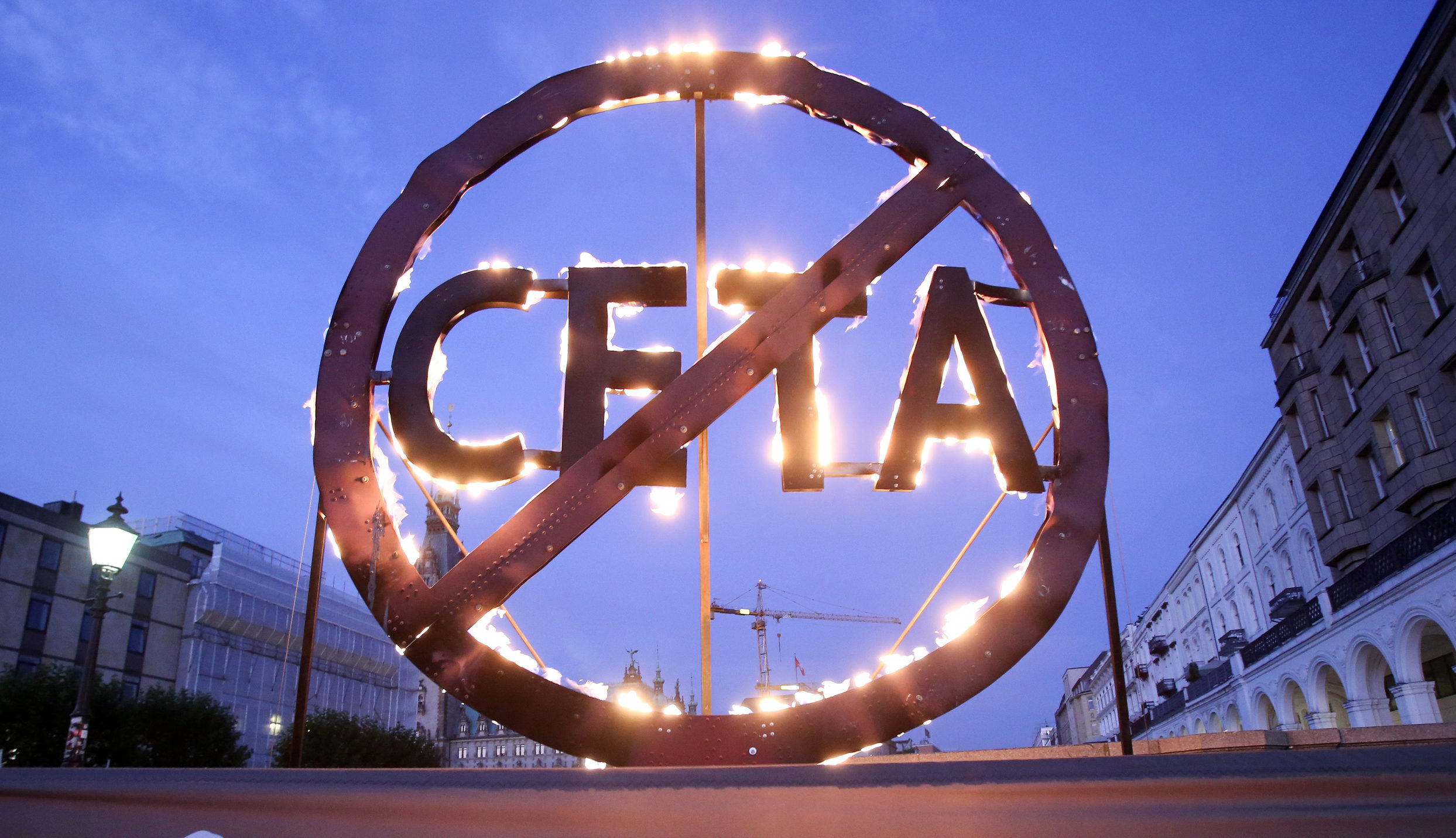 Greenpeace activists demonstrate for more resistance against the Canadian European Trade Agreement (CETA) with a burning CETA sign in front of the Parliament in Hamburg.

So, after what appeared to be a great act of resistance, Wollonia dropped the bag. A bag that contained the grievances of millions of Europeans, not just those of Wallonia’s farmers and  human rights supporters. All hoping, hearts in mouths, that this little French speaking region of Belgium would hold firm and defy the callous might of corporate hegemony.

But it was not to be, yet. The spin, it seems, must take a further twist; the ball kicked further down the road. This particular line of resistance lacked the fortitude to bring CETA to its knees; although by winning certain compromises, it has certainly hobbled it, and this may well prove significant in the months ahead.

Just prior to Wallonia’s intervention, we were treated to an extraordinary capitulation by all EU States to towing the line of an unamended status quo. A collective unwillingness to demonstrate any resistance to the further passage of this egregious trading deal.

It’s important to recognize here, just how much of a gap has opened up between the voice of the people and the political institutions which claim to represent them. Close to 3.5 million people had signed petitions demanding the cessation of the secret negotiations that form the basis of this Canada/EU trade deal. Pretty much the same figure as those who spoke out against the better known TTIP. Yet, this virtually unprecedented number of voices were completely ignored by EU heads of State.

This offers a vivid picture of just how far ‘solidarity between thieves’ operates in the in-bred political institutions of the European Union. And of course it’s the same on the other side of the Atlantic.

What we are witnessing is the near complete collapse of the democratic political framework. A framework in which citizens voices were once recognized as the foundation stone of self governing states. And from citizens’ perspectives, it also represents a rapidly waining love affair with the global neo-liberal free-market ideology, that has for so long been embraced as the centre-piece of  ‘progressive economics’ in the West.

So what will happen to the CETA deal now?

It’s passage towards becoming a permanent legal entity looks to be a rocky one. Already there are a plethora of ‘TTIP/CETA – free zones’ amongst local authorities across Europe. Strong similarities are emerging with the anti GMO movement’s ‘GMO Free Zones’ – and it’s not surprising – because GMO are exactly what would flood Europe if either TTIP or CETA were signed.

The secrecy surrounding the discussions is a hallmark of the largely successful resistance Europeans have shown to GMO. Now they aren’t going to tell us what is being negotiated because they know it is unacceptable to a great swathe of European citizens.

Against this back-drop of growing hostility to these ‘fixed’ trading agreements, the CETA deal will now be scrutinized by the European Parliament, and after that it will require ratification by Member State Parliaments, including some ten regional parliamentary authorities. This is significant, as the concessions granted to Wallonia will have set a precedent for other authorities to demand similar concessions, and that could soon make the whole deal unworkable.

Wollonia, in spite of its compromise agreement, has already stated that it will not accept the package in its current form when it returns again, citing the corporate court issues as a major stumbling block.

Even more significant is Belgium’s promise to take the whole corporate court element of CETA/TTIP  to the European Court of Justice, in order to get a ruling on its legality within the  European constitution. That could be very interesting.

This is no time to let-up on citizen pressures to completely scrap this infamous deal. We need to keep our voices raised in support of something very different:

Don’t lose heart, we ‘the people’ are increasingly marching together on a road of radical reform – which will soon be unstoppable.

Julian Rose is an early pioneer of UK organic agriculture, a writer, activist and President of The International Coalition to Protect the Polish Countryside. He is author of two acclaimed books:

‘Changing Course for Life’ and ‘In Defence of Life’ which can be purchased by going to www.changingcourseforlife.info  Further information about Julian’s unusual life and work is also available on this site.

View all posts by Julian →
This entry was posted on 17 November, 2016 in homepage and tagged CETA, Julian Rose. Bookmark the permalink.

One Response to   CETA: Playing With the Politics of Power