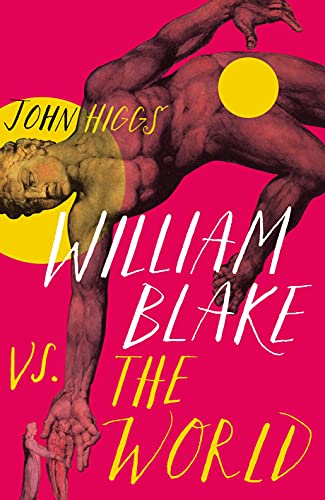 On William Blake vs The World by John Higgs (Weidenfield and Nicolson,2021)

From William’s walks down the Strand through time’s stream, John Higgs
Has brought Blake back to burn brightly, as in Weidenfield & Nicolson’s wise
Volume, all of Blake’s former bounty is here, and his life. William Blake is
John Higgs’ totem, its clear, as he should be for us all. This book proves it.
As the world’s Visionary in Chief, we’re just flickers seen in those Leonard Cohen
Cracks that let light in, and which Blake dealt with fully as he sought to illuminate
And alleviate, too, earthly strife. In Eighteen chapters John Higgs shows
How Blake discerned each dimension, from love and light, through religion
And into modern science and space.  He was the living proof of God’s point
And possibly became man as portal, as his work and way made the methods
To truly unify our torn place. This short, and overweight, evolved man,
Is physically revived in these pages, where Higgs warmly human prose, poise
And reason recalibrate Blake as star.  From the age of eight, or ten where
He glimpsed a tree full of Angels in Peckham, straight to God’s mansion,
Blake, that great One man Movement truly understood where and what it is
We all are.  In his biblical score Blake epitomised vision which Higgs seeks
To detail in scientific ways  free from myth. By examining the theories of
William James in 1901’s Varities of Religious Experience and Eben Alexander III
A century later, the noetic state and poetic fuse from  Blake’s tutelage
As mind gifts. The self is a mental creation in thrall to the higher realms
William witnessed, as he received information that would see the modern view
Fail all tests. He grasped the four modes of insight where we have only one
That time blinkers. Blake, as transcendant and true progressive too,
Saw souls crest. Higgs proves the point further  still as he explains Marchus
Raichle’s  fMRI scanners, showing how those former angelic orders
Eequivocate sleeping brains who communicate while at rest, lighting the dark
Like engravings; the sort that Blake himself innovated within his childrens
Books and gold frames.  In a poem written at the age of fourteen he even
Championed the Transgender, roaming English fields as a woman as he sought
To become everyone. For in Blake’s cathedral of mind God is securely housed
In the body; a fact he shared and defended as he endured accusations
Of madness and more. Each word stunned. And yet through it all, he shaped
Peace and gave it a place and state for becoming;  ‘the sweet moonlit space,
Beulah’, where, as Higgs has it, every seeker could gain ‘a post coital embrace
from the whole universe.’ So Blake was both science fiction and fact, as much
As he was social comment. He was history and religion, advance and art,
Coin and purse, An expenditure not of the hand, but of the full mind and spirit,
Spending himself for a future that is even now far behind. Blake was another
Jesus, perhaps, humbly born, and a craftsman, working within a tradition
That defies the tattered one we now find. Higgs proposes that Jerusalem’s
Famous lines may well be journalism and that Joseph of Arimethea brought
Jesus to walk on England’s  ‘green and pleasant land’ in his time.  Higgs positions
Blake at all points in this vital book, a new classic, which after Ackroyd’s is part
Biography and part Bible in which The Marriage of Heaven and Hell is the treatise
And map for the ascent that awaits all mankind.  And yet Blake took no side.
He is neither Dawkins or Chopra. He was not Ayn Rand, or James Lovelock;
Contrarieties for him contained truth.  Which makes William Blake Quantum’s
King and a forerunner too of H. Pinter, for whom  reality shifted under falsity’s
Weight, free from clues. Higgs adds his own poetry through the poetic elegance
Of his writing, as talks of ‘the qualities of birdsong, guitar chords and laughter’
We see a writer whose emphatic prose deserves raise. He is one of the best teachers
We have, as he eloquently elucidates all he studies, from the KLF to Tim Leary,
To the Twentieth and this century, his words raise – both interest, hope and the heart
As John conveys Bill’s breadth and full bounty. Comparing Emmanuel Swedenborg’s
Partial vision, heaven formed,  with Blake’s take on Hell is one stance. But there is more,
So much more about this artist as individual antinomian working freely, separate
To time, matching Angels with Chimney Sweeps through art’s dance.
From the Enantiodromial approach that Carl Jung saw, Blake built fresh futures.
In shaking Blake in this volume the experience encyclopedia props all doors.
As the words written here complete Blake’s Eighteenth Century vision to create
One for the Twenty First still to follow,  John Higgs delivers through this artful
Enterprise, truth reports. He has found a way, finally to make Bill Blake a new hero,
For an age in which a restarting needs a union from both below and above.
And so, John Higgs sets the scene and tells the only tale that needs telling;
That we need Blake’s informed innocence at the centre of all advance
And experience.  Are we grateful? This, at last, is the lesson and applies
To this book once you buy it: Mankind is found guilty if He, She or They

Published on 1st June 2021 by Weidenfield and Nicolson in Hardback, ebook and audio £20.00

View all posts by David →
This entry was posted on 21 August, 2021 in homepage and tagged David Erdos, John Higgs, William Blake. Bookmark the permalink.