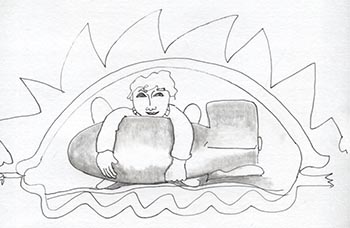 Young boys are great collectors and vie with each other to get hold of the latest ‘Action Man’ or other plastic heroes from their cornflake packets. But there was a time when these collections had a far more lethal provenance.

The boy walks to the school which stands at the far end of his street. It is a single story wooden structure where low grade teachers, ticking over in their lives, teach text-book lessons and attempt to impart rudimentary learning on the dim sons and daughters of local factory workers. The girls must be able to give change and the boys to count house-bricks – and not much more.

As he approaches the school he sees on his left a large gap in the orderly row of cheap housing. Two houses have been hit fair and square and most of them have fallen into the road, while either side two more have lost their roofs and the curtains hang ragged from broken windows, flapping sadly like forlorn banners in the morning air.

He skirts the pile of rubble which extends half-way across the road and passes a keen eye amongst the broken heap for interesting pieces of shrapnel. He had been out earlier with a piece of newspaper and a large nail looking for new items for his collection. Since the fresh shrapnel is invariably too hot to hold, the newspaper is necessary, and the nail makes it easier to dig the pieces from the tarmac pavement where they lie embedded.

His best piece is the undamaged nose-cap of an anti-aircraft shell and of this he is immensely proud since it gives him the status of a serious collector, although not putting him in the major league; that exalted company is inhabited by boys who have the real stuff.

On first seeing the (presumably) dud German butterfly-bomb which a friend at school occasionally, and with a great sense of ceremony demonstrates, he had been filled with awe. It is a strange contraption: what appears to be a large tomato can with a long skewer-like handle springing from the side. When the handle is pulled, two winged shells open either side and the whole thing painted bright yellow.

He had been allowed to pull the handle for himself and been fascinated by the sheer foreignness of the mechanism. The mystique of this device made greater by his innate understanding that he could never hope to own such a powerful item, and though he values his shell-cap, he would not mention such a paltry thing in the presence of this.