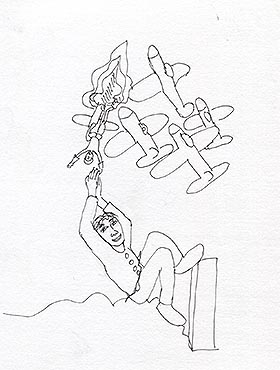 Human nature has many mansions, some of the best quite admirable, while others, especially in time of conflict, can emerge as entirely without human empathy, even sadly amongst one’s own compatriots and relatives. Children however, being of a more innocent nature are liable to view such conflicts through different eyes, and are without the hatred commonly expressed in such circumstances.

The Dornier blunders slowly across the sky, its numerous engines serrating the leading edges of the swept back wings, the matt-black livery emblazoned with swastika and cross. It is without fighter cover and drones its lonely way across the blue summer sky, a dark and ugly cipher abandoned by its faster moving fellows as they flee from the latest raid. The boy watches fascinated from his back garden and knows the bomber is doomed. Soon will come the sound of roaring engines from the nearby airfield, and a squadron of Spitfires will take to the air. The Dornier won’t stand a chance.

Butterflies are abundant this summer and the garden is full of their mad fluttering, sparrows chirp and grasshopper buzz, but the deep throbbing engines of the Dornier carrying its crew to their doom tells another story. The boy cannot correlate these two worlds and wonders which of the two are real.

He waits. Still no sound from the airfield; perhaps they have not spotted the ill-fated craft. The answer comes in a moment with the staccato exhaust of several Spitfires as they burst into life and begin revving for take-off. The boy imagines them racing down the runway and here they come! – Shooting up one-by-one over the rooftops and circling to join their fellows, before settling into formation and beginning the long climb upwards towards the Dornier.

The German plane lumbers on giving no sign and taking no evasive action, too huge for such manoeuvres it is a sitting duck. The Spitfire climb upward, rapidly receding and growing ever smaller against the German Goliath, and now comes the distant rattle of machine-guns as they swarm like tiny flies around the giant. The German is fighting back with its formidable armament, and its turrets swivel and seek with their heavy cannon to drive off the Spitfires. But they are too fast and soon black smoke is pouring from its engines. They falter and cough, and bright flame flickers from the rear of the fuselage while the boy watches with a sinking stomach as the great nose drops and drops again; lower and lower, as if it can no longer keep up its head, until, with one last crazy lurch it turns nose downward and begins its long smoke and flame trailed spin to the earth. The boy imagines the crew desperately struggling to get out and waits anxiously for the parachutes to appear, but there are none, and the vast plane hurtling down in a wild corkscrew crashes into the ground a mile or more away.

Drawn by the machine-gun fire and roaring engines into their back-gardens, many housewives are watching the aerial drama and shriek their encouragement to the Spitfires.
‘Go on boys,’ they shout, and. ‘Get ’im! Get ’im!
With the appearance of the smoke they cheer and when the Dornier begins its long fall to earth they shout. ‘Hooray!’

As the great plane disappears below the rooftops, there is a moment of silence while all ears wait for the sound of the impact to arrive. The wait seems interminable, until a huge ‘Whump!’ trembles the ground and explodes like a thunderbolt in their ears.
‘’E still ’ad some bombs.’

It is his mother, she has come outside to watch and now stands just behind him.
‘That’ll teach them,’ she says. She has her arms folded akimbo and there is glory in her eye, she is proud of the ‘boys’ and the ‘job’ they are doing.
‘That’ll teach them a lesson,’ she says again, ‘and serve them bloody well right.’

But the ‘boys’ are back, returning in triumph to their field they buzz the back-gardens and waggle their wings. One, perhaps more exulted than his mates does a victory roll.

The people in the back-gardens wave and clap as the Spitfires pass.
‘Hooray, hooray,’ they shout.