Posted on 6 February, 2014 by DaveTomlin 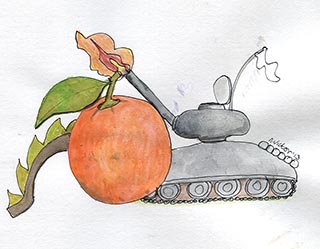 Favouritism is a common syndrome in daily life. However, such a thing can be magnified
to inflammatory proportions when scarcity rules and perpetrators stand in danger of losing their heads.

In the kitchen the boy is listening to the wireless; Monty has Rommel on the run and names like Tobruk and Sidi Barrani frequently occur, while the announcer’s voice breaks often with excitement as he reads a roll-call of enemy losses. The front door opens and his mother comes bustling in, she has just returned from her daily visit to the shops to see if they’ve ‘got anything’. She marches straight in and places something dramatically down on the kitchen table. It is an orange. The boy stares at it in fascination, he cannot remember seeing a real orange before; it sits on the table radiating orangeness as if lit from within and his mother is full of righteous indignation.
‘Oooh,’ she says. ‘I’d like to screw his head off.’

She sits down and they look at the orange.
‘I saw him giving something from under the counter to his favourite customers,’ she says angrily. ‘So I kept an eye on him.’
The boy listens to the story intently and knows the shop she is speaking of.
Whilst awaiting her turn in the queue she had noticed that the assistant was wrapping something under the counter and slipping it into the shopping bags of certain customers. Standing on tip-toe she had seen that they were oranges. Arriving at the counter for her purchases she had quietly told the man that she too would like an orange. The man had made a bad mistake and denied that he had any such thing, until with rising voice she had threatened to shout the shop down.

The man’s second mistake had been to offer her an orange to keep her mouth shut, placing a finger against his lips as he did so. She had taken the orange and holding it up for all eyes to see shouted: ‘He’s got oranges under the counter!’

There had arisen an angry growl from the women present, they all have children, and war and shortages have made them feral. Rather than be torn to pieces the shopkeeper now very red of face, had brought forth his shameful hoard and distributed them amongst the women who had born them triumphantly off.

As the boy’s mother takes a knife and slices the orange in two he sees in her eye an enviable degree of satisfaction.

‘I’d like to screw the bugger’s head off.’ She says again.

The boy’s father is coming home on leave and he waits at the local station for him to arrive, kicking around at the top of the slope and watching as each District line train comes in. Eventually he sees amongst the passengers a khaki-clad figure with kit-bag on shoulder and sparkling boots, who breaks into a smile when he sees him.

The boy is silent, seeing so little of his father he has become almost a stranger, and as they walk home he anticipates the shriek of delight from his mother when they return. He hopes some of his friends will see them, and notes with satisfaction the authoritative crash of the steel-shod boots.

He is immensely proud of his Lance Bombardier father, the lone stripe on his arm announcing the princely rank, but is somewhat disappointed with the stripe; he had expected a little more gold braid than this.
To be continued…

View all posts by David →
This entry was posted on 6 February, 2014 in homepage and tagged dave tomlin, nick victor, World War 2. Bookmark the permalink.