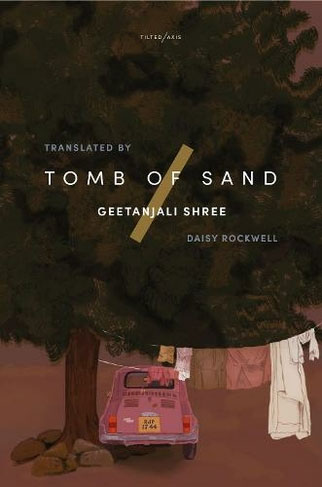 Tomb of Sand is one of the best novels I have read in a long time. It tells the story of Amma (also known as Ma) and her family, through incident, digression, narratorial interruptions and interludes, political and historical diversion and asides, and is written from several points of view, including a friend of one of Amma’s sons, Sid, who doesn’t actually appear in the novel (the friend, I mean); Beti, the free-spirited ‘modern’ daughter; the oldest and therefore ‘responsible’ son; an absent son, working abroad; and a crow. Confused? You will be, just as Beti becomes when Amma finally arises from a period of mourning or a massive sulk – no one is sure – facing her bedroom wall in silence, before moving into her daughter’s apartment for a while, for rest and recuperation while a new family home is created for her.

Suddenly, Beti’s flat, once a stylish, minimalist retreat, perfect for her single lifestyle and journalistic work, is invaded by Ma’s possessions, plants, rubbish, friends, family, and noise. Beti finds herself becoming more and more conservative (small c) and upset by her mother’s ever-more-free lifestyle, not to mention her friends, particularly Rosie. S/he is a gender fluid, shape-shifting undesirable, who turns up unannounced and shares and acts upon her radical opinions about everything, from food to ecology to recycling to handicrafts. Beti comes close to both a nervous breakdown and breaking-up with her boyfriend KK.

Extended families and their interactions and responsibilities are, of course, alien to many of us in the 21st century. In some ways, part one of the book lets the reader in gently to Amma’s world, even though she is absent from the conversations and arguments about what should be done with her, how to stop her simply fading away of her own accord as she ignores everyone and stares at the wall. Part two occurs after she has chosen to re-engage with life, but this time on her own terms, bringing disruption and confusion to both her relatives and friends. Part three sees Beti accompanying Ma to Pakistan on a visit, and the sharing of Amma’s past, not to mention a spell of internment and a sustained discussion about Partition, boundaries and borders.

This is a busy, fascinating book. It tells stories within stories, alludes to events, places and situations I have no knowledge of, and is peppered with Hindi words and phrases. Daisy Rockwell, the translator, writes about how linguistically playful the allusion, wordplay and intertextuality of the original book is; she has done her best to reproduce the poetry, metaphor and music of the original, along with the free-flowing nature of how the story unfolds.

I should make clear that it isn’t a difficult book, nor is it as big as the page count detailed above suggests. There are plenty of pages left blank between each chapter, and some chapters are only one or two paragraphs long. The writing is sensuous and engaging, showing us relationships, ideas and places in new ways, from several angles, at times allowing us to become part of the family before moving us away to observe events from a distance. This is a world in flux, one where relationships, gender, sexuality, routine, ritual and society are changing; a world where the result of Partition, the creation of a new country and the imposition of new borders, is still being felt decades on; a world where Amma’s decision to change her ways, her routines, her life, results in much reflection, reconsideration and repositioning.

This isn’t a text that simply moves from A to B in a straight line, but it is a wonderful and often hilarious representation of the multitude of expectations, encounters and incidents that make up our lives. It is a text that reveals Indian life to outsiders, and challenges us to be open and inclusive, to think about how we imprison ourselves and others within conventions and habits. If the occasional info-dumps or polemical sections sometimes feel intrusive, they are soon left behind in favour of more narrative surprises. This story twists and turns through the present and back into the past, suggesting acceptance and open-mindedness as possible solutions for the future.

View all posts by Rupert →
This entry was posted on 4 June, 2022 in homepage and tagged Geetanjali Shree, Rupert Loydell, Tomb of Sand. Bookmark the permalink.