Bringing the Woolf to Your Door 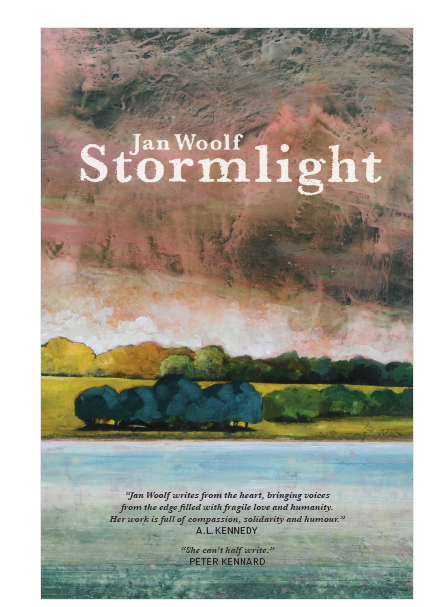 And so it proves with these stories, sourced from Jan Woolf’s private flame.

Now made public, released into the stream that entrances, Riversmeet Press

Sets words sailing in a beautiful book for thought’s game.

For Woolf is always playful; her wit and way with words sets banks singing,

As the song of inspiration flows for us, we see in these tales each bright catch:

Stories borne from retirement and life change, scenes from the political spectrum,

From the personal realm to the shared one, here are hearts and minds,

Like wild salmon, upstreaming fast currents and never of course turning back.

Each storm wields its light, either through attack, or cessation, as the characters

In these stories each have a means of control. They know their fate and fight it,

Or blithely accept life’s direction, as with the opening Icarus ramblers,

Where an enraged wife strifes her husband by hurling at him a steadying walking pole.

As she traces the comic across the bewildering landscape of age.

There is humour abroad and in the home of the heart that she details.

There are the every day dramas and Soap Operatic Arias on each page.

In Beyond the Coin, Management Executives wilt before the power-point preen

Of progress, In Fugue the funeral of a respected Socialist sparks memories

Of former Spitfires and sets a commemorative cello’s comment poignantly

Into chase. Each vignette lands and charms, forming a much grander

Perspective as Woolf’s own progression as writer, activist, woman and definer

Of truth attains place. Yet this is a book of photographs too,

Snapshots from the life that’s she’s witnessed, some as they happened

And some of course forged by art. Eulogy for a Defiant Gardener stuns

As his time musing daughter sows tribute; over thirteen years, as narrator

She speaks to past, present and future and plants for a lifetime

The renewable fruit of the heart.  With her working class father employed

By the english gentry, each stance of resistance ensures that those rosebeds

Of class are soon pruned. The garden metaphor roots the political weeds

Wound around us, with love and time passing chorusing behind the dawn’s

‘When I was thirteen and you forty four, I trod on a snail. I laughed when once

I’d have cried… You looked upset as you said, ‘They look like burned out tanks..’

One Summer evening rinsed in birdsong, I came to see you in the kitchen garden,

loving you as much as ever..’Mind you don’t stain them trousers,’ you’d said,

as I brushed by the raspberry canes, the fruit falling at a touch.’

As they subtly alter perception. They have the grace of a poem and the broad

Appeal of TV, as the stark Stormlight shines we are all too aware of life’s dangers

Or could be. In Babes in Arms, the borough of Barnet is seen as a tremulous

Of young mothers and a female pensioner. The council fear paedophiles,

Even at this time in the morning, as societal fears and pressure assault a brave woman

Outraged and defiant before a false nomenclature.  Admitted, finally, the story

On screen projects inwards, as the older woman remembers the abortion that birthed

Her life’s fate. And yet the telling prose remains calm. Woolf is in control at all stages.

Around hate.  And so the fine details accrue; the story vignette The English Teacher

Is a dialogue poem. The Baton features Sidmouth as a site to anniversarise CND.

Slick concision.  Argument, fear and reason rumbling like thunder as it advances

Towards us to test the splintered temperaments of the free.

From the toilet bound Napoleonic visions of Ten in a Day, with its ‘flat as a fart’

Straight to Castro, portraits etched and rendered as each subject receives

Crafted cover and the numerous protagonists have their say.

If a poem contains a novel’s worth full of meaning, so these brisk

Yet elegant stories whisper in our ear and inform.

Conflicts in Lebanon all combine within Sugar Plum, a truly sour sweet

Telling,  as Zeina’s abdomen houses secrets that are only truly unravelled in war.

And so Woolf creates work from the political storms she has lived through,

Casting art as her light source and her spotlight too on the wrong.

Or the elderly homeless couple in Christmist, each tale is a cry, scream

And song. From the playlet’s ingenious Science Fiction/Fact of Socialist

Decrepitude to contemporary parlance, I love you Babes mixes

With  ‘ripples of breeze around the earth’. An ancient Holy Man welcomes death

In Navaswan, near exultant, while the Mother of World War One’s last survivor

Writes him a letter, as two centuries find connection and her redacted love tokens

Signal both one man’s death and truth’s birth. What do we do with the wise

At an unguarded time is the question. As rivering through these stories are the forces

And drives of the old. They know so much more than the young, and not just because

They’ve lived longer, but because in their living they knew what it was to be bold.

In which the left to right struggle was the kind of wound that won’t close.

Now as things slide, the bite of the night closes on us and Woolf,

In her howling is crossing field, battleground, stream and road.

These stories entertain, educate, encourage us all and enlighten,

In Riversmeet’s beautiful volume you can keep in coat pockets

All that the past is still owed.  For there is honour in here,

The defiant  Gardener conveys that. Here, too, there is power,

The harsh winds of fate and scars sewn.  Along with a life fully lived,

Thanks to this most appealing of writers. Each wolf within’s howling also,

But having seen the world’s wreckage, Jan seeks repair and is calling,

As someone tells us a story they invite us in and are knocking.

Despite the seeming calm, storms are shining.

And while walls maybe shaking there is no need to worry.

Read and then ready yourself to be open. Time has tales

For the telling and there Jan Woolf is, at your door.

‘She steps back into the silence she has created..’.

Where rivers meet the land listens.

Here are  hers and your stories,

Each animal solves its wildness.

It is the only way to learn more.

View all posts by David →
This entry was posted on 11 January, 2020 in homepage and tagged David Erdos, Jan Woolf. Bookmark the permalink.