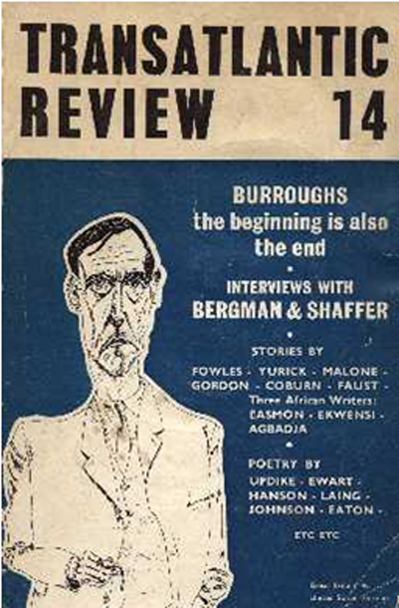 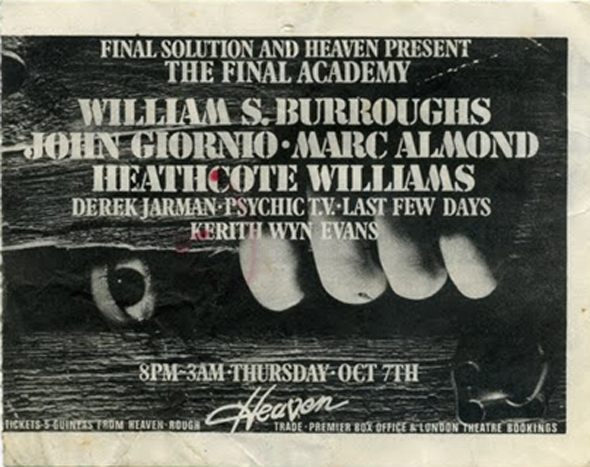 I last saw Bill in London when he came over for an event called The Final Academy which took place in the Charing Cross venue, ‘Heaven’. Derek Jarman was to film it and Bill was the star attraction as uncrowned King of the Underground. He read a riveting piece about mummification and the Pharoahs’ alchemical methods of securing their reincarnation amongst the celestial bodies, and how only the rich and undeserving Egyptian elite could afford the expensive and elaborate preparations that would enable them to rise from the dead..
At John Giorno’s invitation I read a piece called ‘Jumping Jesus’ about Jesus’ sex life. Afterwards we repaired to the Green Room. Bill graciously asked after Joe McCrindle, the editor of Transatlantic Review and a few mutual friends and he kindly drew a piece he’d read recently about Denton Welch to my attention. He always liked Welch’s work very much, and then he was led away by his protective amanuensis, James Grauerholz.
Bill had always seemed well preserved even when terminally abusing his body (he’d sometimes insist that he never got a cold when using heroin) and I can remember the three of us, Ian, Bill and myself once sauntering through Ennismore Gardens where Transatlantic Review was published and when we passed under some scaffolding Bill suddenly reached up and pulled himself up urging us to do likewise in a spur of the moment demonstration of physicality. He did a number of pull-ups with considerable dexterity and unexpected strength.
But now, at Heaven, he suddenly seemed to have aged. He was using a stick , and he was holding himself upright with difficulty, and in August 1997  el hombre invisible, as the Mexican street kids used to call him when he lived there,  died.
Bill Burroughs has now entered the region of total invisibility, and yet he’s highly visible, achieving cult status as the hippest person that ever lived although oddly, during this his centenary year and given the current mythologizing of one of the most complex characters of the twentieth and twenty first centuries, I’ve found that I mostly remember his kindness. His last written words were, after all,  “love is the most natural pain killer there is.” And he’d firmly declare his belief that love was the only way to resolve conflict; a message that certainly bears repetition. His last spoken words were reputedly. “I’ll be right back.” Not quite the words of an out and out dystopian nihilist, and in 1961 he’d given an indication that he believed it. When Allen Ginsberg and Gregory Corso interviewed him for The Journal for the Protection of All Beings (published by City Lights Books), Allen Ginsberg asked him: “What is death?” Burroughs replied.: “A gimmick. It’s the time-birth-death gimmick. Can’t go on much longer, too many people are wising up.”

3 Responses to Burroughs in London