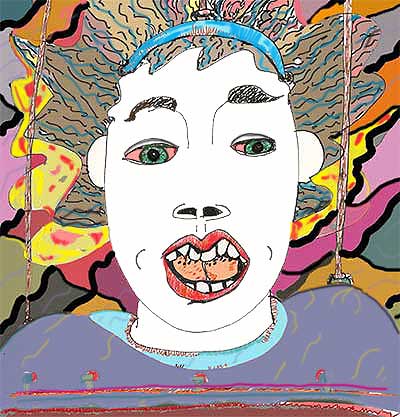 as eclipse,  welcome as the ear

les  tumbled over,  shivered  to

our cheeks and backs,   gushing

the  suddenness of a desert rain.

e parties  must be  prosecuted to

I was only minding my business, duly licensed, meeting the public need. The sun a yolk in overeasy clouds, morning mist just lifting with the day’s exchange, my still-lazy mind already drifting inexorably to the inevitable joyous night with fam. The famously exotic wife practicing her domesticity with loaves and fishes, the two strangely disparate daughters (loversrespectively of books and makeup: the miraculous happenstances of double-helix acrobatics), confidently awaiting the predicted return to our house of ovens and myrhh. Just then, remote divebomber fundamentally insane, the dove started its strafing run.

I can’t blame the war for coming between us.

I said: Adventure’s the blood of young manhood!

I said: Patriotism’s the formula for a love that crosses the borders of the personal.

You said: And war is its necessary antidote.

I said: Duty’s the polestar of civilization.

You said: Warfare, its magnetic opposite!

And so it went, battle upon battle….

Angry dark air, pinkandoranging outside, banners in on HEADLINES of tragedy-war-genocide.

And HEADLINE’s black arts wrestle my gentled soul to earth. But then enter golden wonder

long division between war games and their play (these innocent! alien alike to criticism and

discipline). And improvised ivory and emerald and ruby and amethyst and sapphire devices

explode explode along the green, and

compressed and stretched, stung and tortured between locks and boxes:

to manufacture the din sequence,

Women are not alone in reading the omen,

And so it goes with the Innocent,

who humbly pray, “Break the logjam.”

Obstacles may (or not) be opportunities….

(Watch the Self in turn disrobe or arm – more locks and boxes.)

So too it goes with the Sinister,

Who pummel, prey, and break the law.

Chicago exorcists of the curse of Hue,

the children’s choice seemed so simple and so clear:

To purge and burn the stench of their parents’ sins

as voyeurs in Johnson/Nixon’s daisy chain.

Even as torrents of TV blood and horror

beneath accumulations of mud and silt,

The side of the assassins or the martyrs.

And which will you be, the muck or the water?

Dump the Hump! Make Love Not War! Get Clean for Gene!

Alas. We knew not the problem’s in our genes.

At which When did we become our parents,

self-convinced once more of our own invincibility’s

There’s a border, we thought, between those anxious actions

so at what Then did the line get crossed?

On some cryptic boiling point

And, unappalled, we applaud our Light’s sad transformation into Lightning Bolts.

So to Fate’s position we default.

But, in our prescient prehistoric youth, weren’t we already Angels’ allies?

I hide here in my private cellar

Banners flapping in the wind: my ears at half-mast,

ever banned from hearing the world’s sighs,

they do make handy pegs though in this square boxed earth

to perch my lead spectacles upon

to keep all the winds from off my eyes,

to keep out all the brightest lights,

to keep my fingers finally free,

to keep the breath of wind inside,

to keep from any reaching out

of hands or breath or sound or mind

into this our spectacle of hope or rage.

Some of us are rocket,

so how is stone decided?

Some of us are burden, some are bird:

Need we clothe our us in armor?

Do we judge duty by utility? weight?

(Some would suggest a scalpel….

–Our natures won’t alter even with chainsaw.)

But when clenched missiles powder the earth

and massy skies bring eagles down,

spots in the carnage:

Tweet
This entry was posted on 30 March, 2019 in homepage and tagged Duane Vorhees, nick victor. Bookmark the permalink.