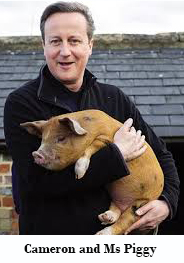 Details of the farmyard orgies regularly performed at the country’s finest educational facilities were spread by one of the Prime Minister’s old university chums Lord Ashcroft in his new book ‘Call Me Dave.’ The billionaire life peer and international businessman laughed, ‘I don’t see what all the fuss is about. Dave was only doing what comes naturally to all public schoolboys. It’s only the same thing the poor would be doing at their local comprehensives had they the money. I suppose they do do much the same but with a packet of smokey bacon crisps. At least, I imagine they do.’

Tory mandarins originally wanted to smear Lord Ashcroft’s claims calling them ‘porkies’ but felt confident UK voters were sufficiently grown up to feel nothing untoward about the fact that their highly-paid leader (who controls their country’s ability to go to war, their economy and critical matters of state) repeatedly stuck his genitalia in the mouth of a dead animal. Lord Behemoth, Conservative MP for Crediton Devon smiled, ‘This amusing little story will do nothing more than reminding UK citizens Dave is just one of them.’

View all posts by Ethan →
This entry was posted on 24 September, 2015 in homepage and tagged current affairs, Ethan Harrison, politics, satire. Bookmark the permalink.