Caprice of the Gods

Posted on 27 June, 2020 by Lawrence Freiesleben 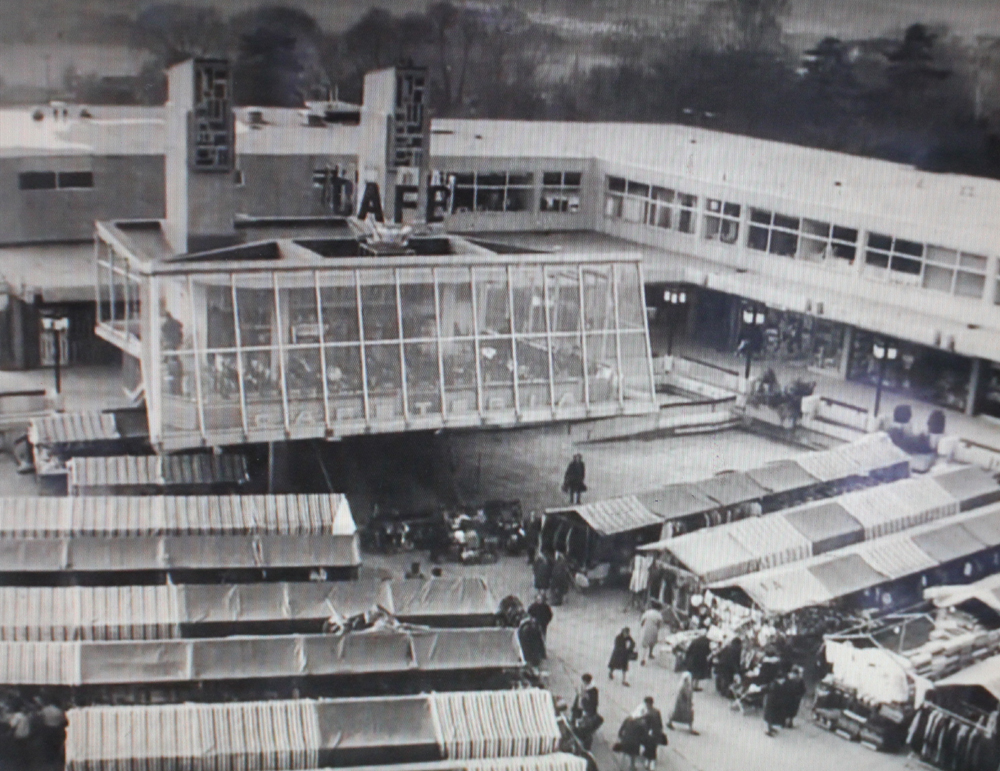 When Brock and Volcano were younger, they had both held a particular admiration for the Cadena café. With its thrusting cliff of tilting glass, cantilevered out above the market stalls at the centre of Arrowsby-on-Lyre’s Post-War, semi-Brutalist fantasy, it resembled a futuristic control tower. It even looked capable in time of attack, of retracting into the concrete hive around it.

Only the County Council’s impressive tower block of offices, gave a better – if more disassociated – viewpoint. On clear days, from its private and remote vantage, the slow diesel trains to London could be seen, departing and arriving like toys far below. A small green model of a wood separated the railway’s fan of rusting sidings from the blue schematics of the boat basin. Turning north, the town would be thronging with miniatures.

A landmark for miles around, this striking building (in which Volcano briefly worked), would occasionally project its higher floors above the low cloud that could cover the town – a fog ascending perhaps from all the veins of the Lyre? This aspiring skyscraper was almost all that was to survive of Arrowsby’s Post-War architectural flirtation. The Cadena and every one of its attendant, flat-roofed arcades with their mechanistic metal sculptures, all were later to disappear – replaced by the kind of characterless mall, oblivious to the weather, whose deadness could lead you to believe you were anywhere.

The Lothario of Wychert village, another notable friend of Volcano’s, was always easy-going about such radical changes. Whether or not he was in pursuit of some new amour (or trying to avoid the consequences of the last), invariably he’d supply a twine of bantering humorous comments. It was he in fact, who originally contrived the phrase concerning ground glass[i]. Yet, in his apparent disdain for Arrowsby’s topography (he was always vague as to where he was in the town), he affected a variety of other-worldliness himself. How he managed ever to journey from Wychert[ii], remained a mystery: since to navigate even the twisting ways of his native settlement he appeared to require clear instructions. Maybe it was just easier to conform to the expectations of others? Perhaps playing up a need for directional help, gave him a protected or observational distance?

While Arrowsby’s encroaching deadness caused The Lothario no anxiety, Brock and Volcano remained convinced of the town’s absorption by a generalising evolution – another strand of the inevitable ’progress’; a blandness that would soon reach everywhere.

In recompense, Arrowsby still possessed many hidden byways. The old cattle market with its brick roundhouse might have disappeared, but around the church was an area of almost Georgian quietness, while a little to the east, their favourite place of Saturday mornings was the creaking-floored second-hand bookshop[iii], with its warren of shelves and battered armchairs. Here their enthusiasm to browse with only rarely the money to buy, was tolerantly indulged. Even the sloping market square, centralised by its Victorian clock tower, still had its original cobbled atmosphere, opening at an upper junction, into an equally large triangular space, jumbled with buildings of all styles, from mock-Tudor to modernist.

Into the junction where these two distinctive areas met, the head of the High Street, also jutted its distinctive peninsula of brick and curving windows. This was the axle point of the town, and a few shops down was located Brock and Volcano’s other haunt: The Railway Café. Decorated with 50’s posters of long despoiled British towns, this cramped space with an escape either side, harboured their existentialist notions. There, they had all become miserablists, overly infected with the gravitas of tragedy. Actually, it was worse than that, since Tragedy had declined into the gravitas of an aggrandized indifference, or such at least was the cheapened image left – the varnished frame around the posters, obscured by cigarette smoke and the steam from the coughing whir of the coffee machine. As the ideals of Anarchism, had been reduced to an abortive image of crazed chaos, so the Existentialists had been reduced to glum immobility, trench coats and Disc Bleu.

And so, often wearied by the ethos of The Railway Café, Brock and Volcano would look outward from the listlessness of Arrowsby and all their café companions. Breaking away – most memorably in winter – they would trek along gated roads and frosty fields to the picturesque village of Queen Malet[iv]. This custom was most evocative in the advent to Christmas – when the sun would reach its zenith as the village and its high ruined windmill began to appear through the bare branches of trees. In that somehow medieval vista, glazed over with ice, they could almost discern the harmony of ancient instruments.

Their favourite pub, even in a midweek limbo, had a blazing fire. By this crackling source of heat, now festooned around with festive decorations, they would read or talk. Their only qualm about this Inn – where their underage status was never questioned – was its foxhunting sign: Crammed with cheery men in red coats, mounted on stretched out horses, the frozen action showed the traditional full-flight of aspiration. You could imagine the scene painted onto a humming top, endlessly spinning – the distant hounds always running ahead after a vanishing fox that none of them would ever catch.

Where was he now, to remember this? Could he go in and out of past and future, using changing walks that might change things forever? Like waking up while in the midst of walking, to the sounds of an all-clear siren and knowing that the immediate threat was over. Such a sense of threat had the Waterboatman once so vividly described: Of seeing as a child, another black and winged projectile[v] churning noisily across the wartime sky above . . . and then the engine had stopped . . . to an almighty silence. Frozen he had watched it tip downwards, trying to decide which way to run, hoping it had tipped away not closer, and then running wildly for a doorway . . .

Volcano had often known a similar yet imaginary fear. An all-clear had sounded, but the world was empty.

Why had he left, and returned to Avalon’s Well? Could he always step back now? Or would whichever ‘reality’ he was in, dissolve around him? Did he already know the Grail – but was not satisfied that it was within him?

At some other point in time, Volcano and Brock, on a bright summer evening, had been sitting by The Chained Swan[vi], the garden of which, on a slight rise, overlooked a northern part of the Vale of Arrowsby. Amongst the lines of trees and the patterns of variegated fields, they could even see some silver meanders of the Lyre, accompanied by the curves of willows. The warm landscape was fading into a summer haze as they talked of aims and hopes. Brock had just returned from a summer exchange to France and described his holiday with enthusiasm. His gift for Volcano had been a cheese, whose name Caprice des Dieux, Brock knew he would find amusing. They guessed it meant ‘caprice of the Gods’. . . but might have been wrong. It didn’t matter: that was what they felt it meant. Laughter rolled over the empty garden – for now that the sun was veiled, the few other customers had gone. They had the sloping lawn and the huge view of the Vale, the closing evening to themselves. Caprice of the Gods, they could see attached to so many fateful things, to glories and tragedies – but to a small oval box of cheese! . . .

Later, Volcano was trying to describe something he’d been trying to write. As with painting too, he always worked on despite: Despite and ignoring the feeling that it was failing – or was weak or thin and he was discontented. He had the idea – almost a solid thing that he could pull out of his sleeve like a chain of knotted scarves – that as with paintings which sometimes seemed able to change when you were out of the room, so all the ugly cocoons of his words and sentences, given time and space, might suddenly burst into a gently lifting cloud of butterflies! [i]  Asserting that Volcano’s ascetic tendencies required that ground glass should be regularly added to his beer.

View all posts by Lawrence →
This entry was posted on 27 June, 2020 in homepage and tagged Lawrence Freiesleben. Bookmark the permalink.