Posted on 5 November, 2022 by Rupert Loydell

Four Winters is a book of mornings and mourning, of dawns and dusks, a collection of reflective colour photographs on the River Exe initiated by photographer Jem Southam’s need for a time and place to remember and grieve for his brother, and the recognition that in finding this space he had also found the subject for his next body of work. This book is a selection from the many photographs he made (and continues to make) as a record or diary of his visits, mapping  and recording the landscape near where he lives.

Southam’s images have always been quiet and intense, requiring viewers to spend time looking, just as he does with his camera. In Four Rivers’ often misty riverscapes we see light arriving or departing, swans and other birds awakening or settling down, the water bright or muddy, rippled, still or in flood. Sometimes dark and trees enclose us, at other times silver, pink or orange light illuminates a scene only just coming into being, hills, streams and vistas which are hardly there yet. 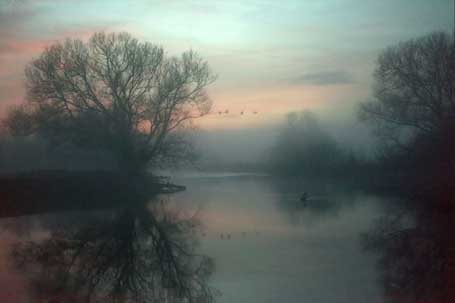 Soft tones of indescribable blues and greys contrast with the occasional autumnal yellow or browns, pale greens. Birds in formation fly by or cluster in protective groups, swans haul their weight in to the sky, avian ghosts against mist or icy dew. This is primal stuff, wild and uncontrolled. Even a sometimes tamed, often inhabited and developed, river still shapes itself, changing the land it inhabits, as it ebbs and flows through the seasons. I feel lucky to share this unknown world.

Julie Blackmon’s photos seem very different at first glance but, like Southam’s, they show, reveal, imply, tell or create stories, in this case slightly nervy or edgy ones set in American suburbia. Children feature, mostly at play or involved in recreational activities: swimming in the lake or garden pools, playing cards or ball games, holding pets, or just loitering outside shops.

Pay attention and it’s clear these photos are staged and managed images with disruptive or unexpected, sometimes surreal or awkward, elements included. A meat chop is held up inside the makeshift proscenium arch of a garage where a talent show is taking place, with a table for a stage in front of red curtains. Christmas lights are strewn across a driveway of a house that still has a Halloween pumpkin rotting on the steps. A lawn becomes the background for a carefully constructed abstract pattern made with croquet mallet, split watermelon, knife, garden hose, tennis racquet, tricycle, a single garden chair, white paint and three small children in nappies – none old enough to engage with what is spread around them. 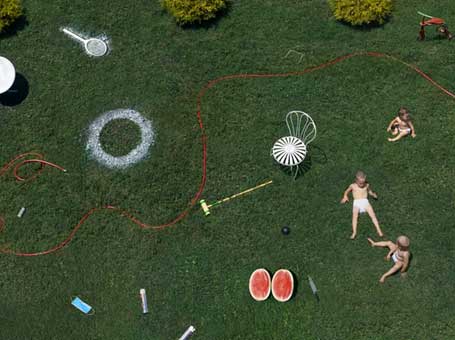 Many of these photographs are disturbing. I am reminded of early Arthur Tress (not his later, highly sexualised work) and one or two of Blackmon’s images feature similar masks and costumes. The photo actually called ‘Mask’ is especially unnerving, especially in the enlarged detail, where three children pose in rubber masks next to another in a wolf head, on suburban steps next to Halloween detritus. Look closely and there is another child hidden on the veranda, whose hands give him away, and another peering out from the shadow of an open door. Why is there a bare branch leant against the front of the house? Is that a real spider on the sidewalk? Why is there a frog, a swan, a discarded mask included in the picture? Where is the little girl with her back to us going? 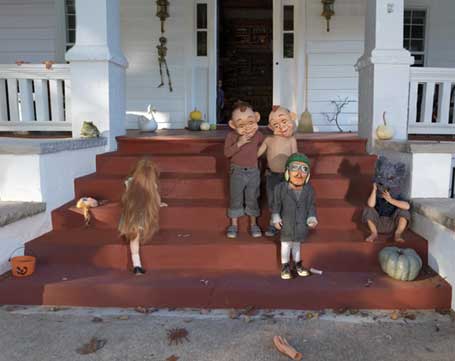 From Blackmon’s strange arrangements and details we construct our own stories, our own commentaries on how, perhaps, the world appears to children, or to the photographer. Why are these children in such awkward poses, at unnatural rest, so unnerving? What are we scared of? How does Blackmon’s photograph turn balls and their shadows on the wall into a planetary system? Why is Blackmon photographing twins, or sisters, in front of a snow scene in summer, when the following pages appear to show evidence of real snow? Why are another set of twins elsewhere dressed up as chickens?

These are strange and provocative images, that provoke questions about how we observe each other and the world around us, and create narratives to make sense of things, however unsettling or beautiful they are. And that is what Midwest Materials shares with Four Winters: an ability to look and wonder, to provoke us to see and engage more, to look up from the page and begin to notice what is happening around us, however slowly or calmly, whether natural or staged.