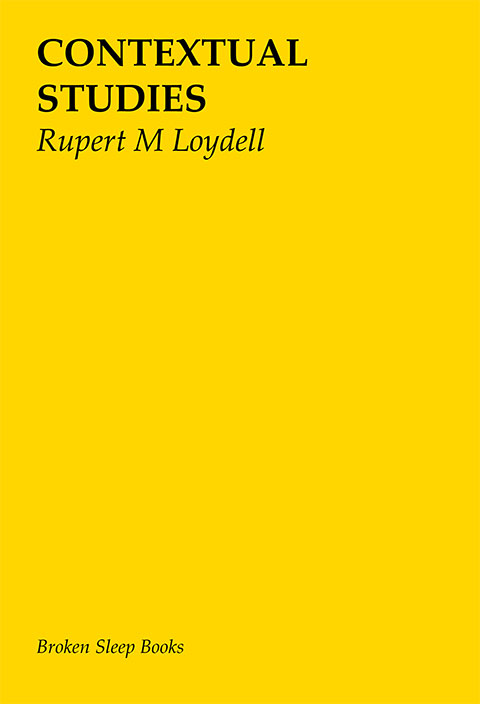 Rupert Loydell’s Contextual Studies continues in the tradition of off-beat prose poetry. It is a journey into one of the most strangely delightful minds in modern poetry. This rich, slow burning collection showcases an array of contemporary concerns and observations, all written with Loydell’s intricate and humorous touch.

These prose poems shows the writer conversing, arguing and examining the facts of his/her and their detachment. The levels of despair are eased by a dignified and mature consideration of the circumstances that created them and deal sensitively with the speaker’s concerns as a constellation of emotions known to us all, forms his existant universe. Introspection expands into said philosophy and the hearts journalism creates headlines for reader and poet alike…

Snatches of conversation are threaded throughout the book; a collage of vivid thoughts and recollections creating a confessional of sorts though one that is purposefully unreliable. Loydell never fully lets on whether or not he believes in the statements he makes… a careful, humourous, and affecting discourse on the ephemeral nature of life, art and writing.

Rupert Loydell’s world is strangely beautiful, or beautifully strange, but it’s also strangely familiar. What I like about Loydell’s work is his commitment to a kind of truth, not to experience so much as to language. He doesn’t fuss over his language, he’s never showing off his clever images, or making you gasp as he steps over rhetorical tall buildings with his wit. He can be witty, he shows his intelligence all the time, but he never shows off about it.

Contextual Studies is a 50 page pamphlet, which is now available from Broken Sleep Books:

Tweet
This entry was posted on 8 September, 2018 in homepage and tagged Contextual Studies, Rupert Loydell. Bookmark the permalink.