I’m no conspiracy theorist but the dates on which the UK government does things often makes me wonder, it’s like they’ve got a druid, a witch and other pagans locked in a back room at Westminster! I can see them now stood round a cauldron, totems aplenty advising our ‘leaders’ on how to progress – as one example, the start of the first UK lockdown close to Spring Equinox, the end of current restrictions, Summer Solstice! I always seem to notice that changes seem to be on, or around, the solar festivals, I’m sure the final Brexit talks were on or around Imbolc as well, strange times! I should have written all these dates down really because there have been other instances (and then I could have started a conspiracy theory! Maybe I have!).

Throughout the lockdowns it’s been interesting and somewhat frightening, to say the least, watching the rise of all these way-out theories doing the rounds on social media. There’s obviously nothing like a global pandemic to bring them all out of the woodwork! Because our generation has never had to endure this sort of global crisis, akin to a war-like situation, nobody knows exactly how to cope or react. The changes to our freedom in our everyday lives – shops and businesses closed, queuing for food at supermarkets – it’s not something we could really have envisaged or prepared for. Although the warning signs have been there over the last couple of decades with SARs, Swine Flu, Bird Flu and Foot & Mouth disease etc. There’s a common factor here – it’s plain to see and it’s no conspiracy theory, the monoculture nature of modern agriculture and animal farming practices need to change or lockdowns are going to become a common theme of our planet’s future. As a vegan I suppose I’m biased and annoyed that a global pandemic caused by people messing about with animals has affected me. I know it’s a lot more complex than that, but leaving animals alone would be a good start. 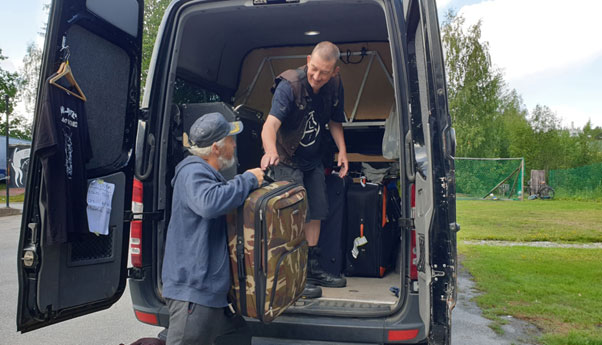 As a musician that plays in DIY punk bands I’ve been fortunate to have been able to travel all over Europe, Scandinavia and Basque playing festivals, squats and the DIY spaces that abound outside of the UK. The last few years I’ve toured hard, with the worry of Brexit in the back of my mind, trying to get as much in as possible before the worst happened. And here we are now, in the middle of a global pandemic, and Brexit is pushed through making this lifestyle, my way of life, almost impossible. I’m sure people will find a way. The underground culture is strong across the world, but jumping in a van with your instruments and band mates to spend a few weeks driving around Europe, crossing many borders is now a thing of the past and we need to somehow adapt. You’re not going to get rich playing the underground European ‘circuit’, but that’s not why people do it. You get well looked after abroad, fed, watered, somewhere to stay and generally paid enough to keep you going in fuel to get to your next destination – it’s idyllic. What makes it all worth while is the people you meet and seeing the real side of towns and cities that you might not be able to connect with on a ‘normal’ holiday abroad.

Whilst in lockdown, friends of ours in Belgium have been evicted from a long-term squat in Liege (HTH). Many of the larger, well-known, long-running squats in Europe are also under threat from development and gentrification. ADM in Amsterdam has been evicted and some of their community are now on a temporary site known as the Sludgefields. And Kopi, one of the biggest and best squats I’ve been to in Berlin, is currently under threat of eviction after twenty-seven years of existence. These squats are home to many varied people from across the world. Kopi often has up to seventy full-time residents living in a community that if fragmented might never be able to find another space of that size where they can keep their community together. 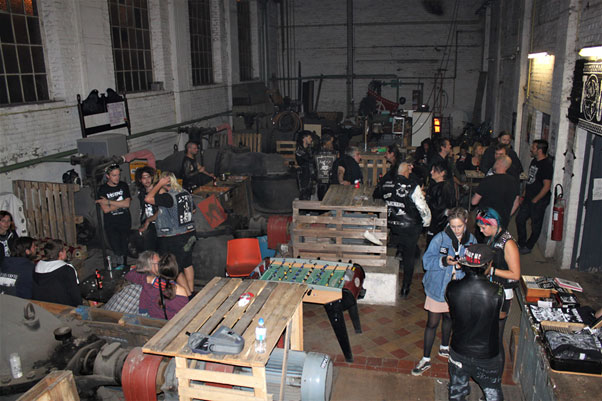 I know everyone’s in the same boat at the moment, missing family and friends, feeling isolated, but I feel the underground grass roots festival, squatting and DIY scene is taking a bit of an extra hammering. Community is at the core of these scenes’ existence. We have many, many friends who we could normally meet up with at various annual events. I might go a whole year without seeing some people I can call friends and just pick up where we left off, you know you’re going to see certain people at certain times of the year, one thing’s for sure: nothing is certain anymore. When you’re used to being lucky enough to being out and about most weekends of the year travelling around playing gigs, meeting up with people, the lockdowns are going to hit you hard. Like many people, we tried to keep being creative, adapting to playing live music through social media to keep people and ourselves to some degree connected. We helped out with the Virtual Stonehenge Festival 2020 which turned into a bit of an all-consuming affair for the whole of June! But it was on the whole mostly well accepted and enjoyed by a lot of people who were beginning to feel fragmented from community. As soon as the initial lockdown restrictions were lifted, we hit the road to Wiltshire and played live on the Drove at Stonehenge, we also pulled up and played at Avebury and Silbury Hill (in photo), nine-volt-battery-powered performances to whoever was around. Not the same as being in a packed out room or festival field, but it felt good to be out and about. The last outdoor performance we did was Autumn Equinox 2020 on the banks of the infant river Swale at Keld, high up in the Yorkshire Dales with a small group of close friends – bliss! More recently, back in lockdown, we continued with online performances. We were asked to contribute a couple of songs to a fund-raising event to raise some money for medical expenses for a well-known, Greek punk community member needing expensive cancer treatment (There’s no NHS in Greece). The event was a huge success raising over twenty thousand euros – that is the true power of the underground, even in the midst of a global pandemic people can come together virtually and make a real difference. Forty-two bands from across the global DIY punk community came together to create nearly three hours of lockdown performances and we were truly honoured to be a small part of that. The performance went out live on youtube, so people watching (over eight thousand views on the night) could comment in real time. When the Andy T Band were up (which was a pre-recorded couple of songs from when we could get together in a rehearsal room just before the most recent lockdown), the band were wearing face coverings which was requested by the owners of the rehearsal rooms in Todmorden. The first two comments were, “Take your masks off.”

How are we going to move forward? Even in the underground/grassroots scenes it’s starting to look like a complex issue, face covering or not, vax vs anti vax – flat earth anyone? The real worry now though, is how do we maintain this global underground community when Brexit won’t allow us to visit and perform in other countries?

Just this week the UK government has given us our ‘Roadmap’ out of the pandemic … let’s see. Within hours, social media was alive with gigs and festivals coming back to life. The possibility of small grassroots festivals and gatherings towards the end of this Summer is looking possible, even small indoor gigs are looking like a possibility. We’ve been booked for a few already, but I’m still not overly convinced. There’s still lots of ‘ifs and buts’, but I’m willing to play a part and try to bring back what everyone’s missing. But is it going to be the same as it was before? Are we heading for a ‘new normal’, or are we going back to normal? I don’t have any answers. I’m as confused as everyone else. I’ve got close friends who work for the NHS, and they say Covid 19 is real – that’s good enough for me. So, how do we look after our own when restrictions begin to ease and we can once again gather together? Like everyone else I’m craving to sing, dance, hug, travel and reconnect with our extended family & friends but I think things might be a bit different for some time yet.

Tweet
more
This entry was posted on 13 March, 2021 in homepage and tagged Andy Burden, Marnie Burden. Bookmark the permalink.

One Response to Covid, Festivals, Brexit & eye of newt