Current state of play at L-13… 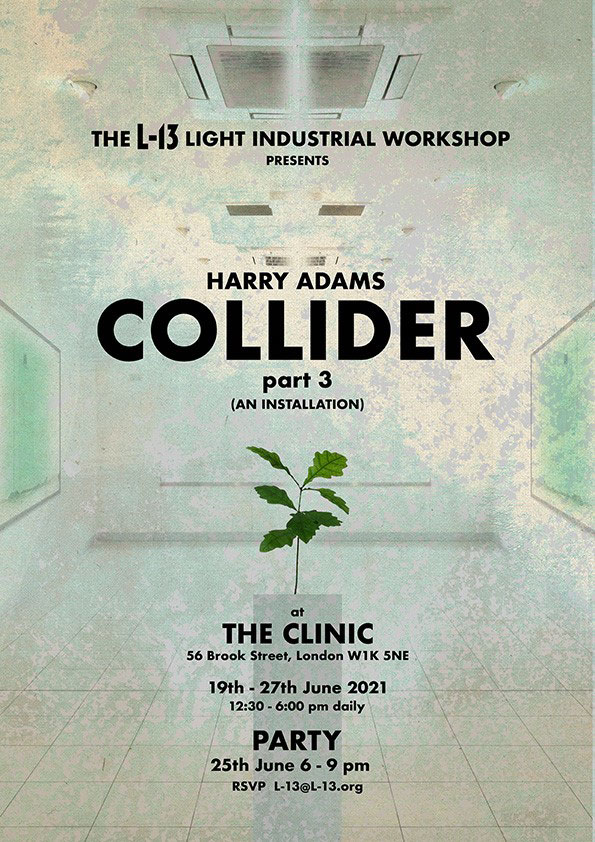 International Times: So, what’s going on with L–13 these days?

Steve Lowe: It’s all systems go at L–13 right now with a full team slaving away at the coal face of artwith no piss breaks allowed. We’ve just shipped out a complete edition of prints by The New Not Banksy Realisation to Japan to help raise funds for an animalcharity run by a shop/gallery in Miyazki. We’ve developed a bit of a relationship with Liberty/Gallery DNA starting a Japanese Not Banksy Neo–Nihilist Not–Art Nothingist faction known as The New Not Banksy Realisation of the Rising Sun. The Not Banksy elves have also been working on a series ofspray paint pieces that we’ll release next month. They’vebeen doing this amongst the rubble of the building site next door to us whilst being watched over by the ex–army security with their vicious dog.

Meanwhile Harry Adams has been hard at work preparing for an exhibition opening on 19th June: COLLIDER part 3 (an installation), being paintings of great terror and beauty featuring flooded lands and turbulent skies shown alongside oak trees grown by the artist and displayed on sound emitting plinths over 3 floors of a retro–futuristic art clinic in the heart of Mayfair. We’re holding off having a private view / party until the 25th when hopefully the Covid restrictions will be lifted. If any IT readers want to come to this they should RSVP to L–[email protected]L–13.org.

Jimmy Cauty’s MdZ ESTATE Tour is back on the road and currently in Edinburgh hosted by the fantastic Society of the Spectacles in association with NorthEdinburgh Arts. For those not familiar with Jimmy’s work they should check it out on our website as a matter of urgency. The MdZ ESTATE Tour is a tour of one of his dystopian model villages, this time 4 concrete towerblocksat 1:24 scale, traveling the world in a 40 foot shipping container. It’s always free to view at point of delivery and is quite frankly amazing. Everyone should see it. His Aftermath Dislocation Principle model is currently in Eindhoven in the Netherlands but we hope to bring it back soon to join the other container, then eventually have a semi–permanent exhibition site in Thamesmead that would include a third container: The Shunt Resistor Wall of Death Experience.

We’ve just started work on a new Jamie Reid book called Rogue Materials. This will be a sister companion to XXXXX we published in 2018 and features Jamie’s Xerox artworks dating from the 1970s. We’ll also have an exhibition of these + a book launch in Clerkenwell in November. Jamie also recently collaborated with Sisters of Perpetual Resistance trouble–maker SisterVoilaon some flyposters that were pasted up around Jamie’s home town of Liverpool with the help of Ragged Kingdom’s John Marchant.

Talking of books we just published a new Billy Childish novella that’s being printed in 13 parts. All chapbooks with a screen printed box to put them in. The first partis out and the second part will be ready soon. The subscription for the standard edition is £75 which seems expensive for a book, but when you break down the costs including postage it works out at only £2.50 per part. As a limited edition its fantastic value for money and everyone should subscribe. It’s also a great yarn about the experience of a dysfunctional dyslexic art student, written in the spelling and dialect of its protagonist Gustov Claudius. It’s also very funny.

Then, if that wasn’tenough from Mr Childish, we have 3 …no 4 vinyl LPs in production and two45s. The first of which will be available soon as a small pre–release Test Pressing edition (ie expensive) and for pre–orderfor the regularedition. The world has gone vinyl crazy during the lockdown so the production time to make an LP is now something like 6 months. We’re working well advance to help Billy’s ambition of releasing 13 LPs in one year along with his record label Damaged Goods. He says it’s a Career in a Year. But someone needs to either stop him or open new pressing plants as a matter of urgency.There is morebuttime’s up, so that’s it for now folks!

View all posts by Jan →
This entry was posted on 12 June, 2021 in homepage and tagged Jan Woolf, L-13, Steve Lowe. Bookmark the permalink.