Posted on 11 April, 2020 by Lawrence Freiesleben 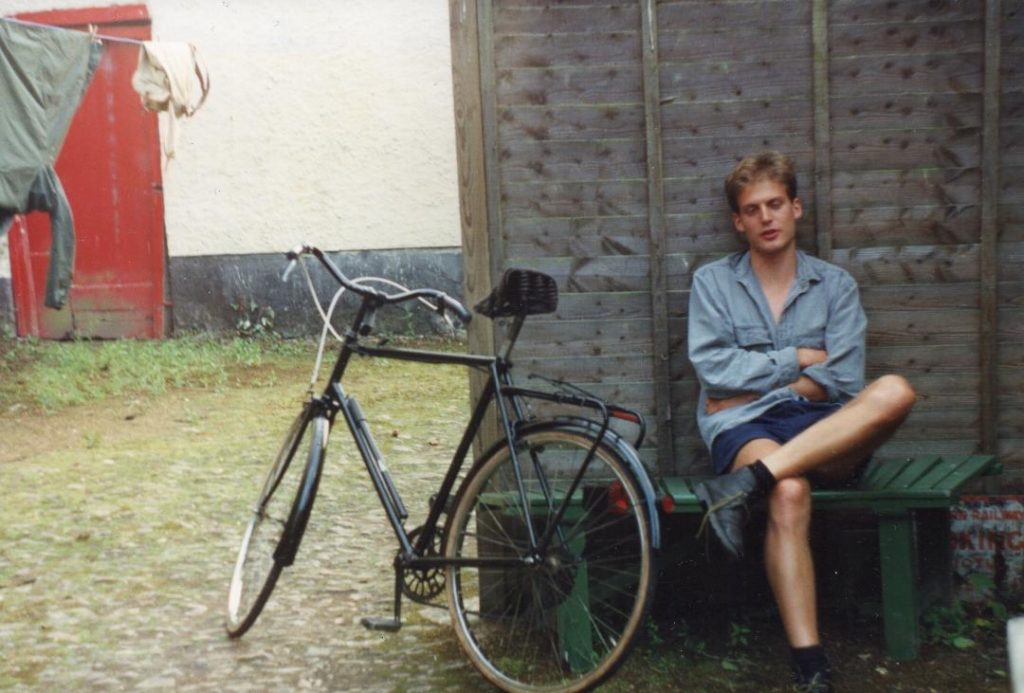 This photo shows the bike I built myself in the late 80s mostly out of old parts I liked too much to scrap. At first it only had five gears, but soon after this photo was taken – in fact as soon as I woke up – I replaced the TRIUMPH drive cog with the biggest chainset available in Ottery St. Mary. It also had the smallest drive cog, so the ratio was tremendous, whatever that means. Note the mudguards. I hate bikes without mudguards, you get pointlessly wet and muddy. Bikes without mudguards are like horses without manes.

Even before this bike was mechanically complete[i], I’d painted it with this weird, deep purple paint that was still tacky 6 months later. In a beautiful 40s tin bequeathed to me by my Grandad[ii], this was some kind of “Crystal Enamel”, and I think you were supposed to bake it on. But though the sun of 1989 was regularly hot, I should’ve borrowed a blowtorch to achieve full-baked-ness.  By the way, don’t tell me it looks black! I know.

Although the chain occasionally slipped mid-range, the dark purple wonder once reached 687 mph on the Honiton Bypass. Like the chain, my memory slips when it comes to recalling higher speeds. The speedo, from an old Triumph 2000, was recalibrated so that each 10-mph segment equaled 100. It was never that accurate.

Very early one morning on a lane towards Sidmouth, we appeared to exceed lightspeed, since I arrived on the beach 10 minutes before I’d left home. Of course, it turned out that the clocks had gone back. I hadn’t realised this biannual conspiracy was underway. Why do they still bother with such nonsense? 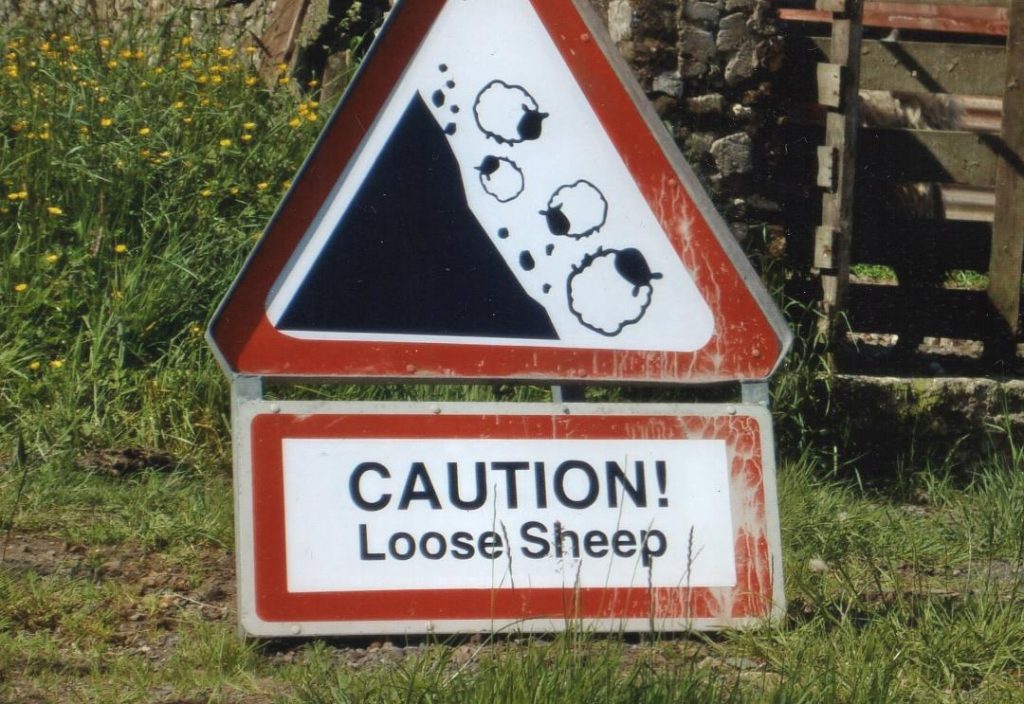 Uphill or on bumpy ground, I generally prefer to walk – an atavistic instinct stemming from the fact that until I was 20, my bikes never had more than 3 gears[iii]. When I first obtained (secondhand) a bike with ten gears, TEN GEARS, I felt like I’d been given a 1964 Corvette Sting Ray[iv]. ALL THOSE GEARS! But you quickly realise that most are only a cog on the way to another cog. Only one, six and ten really counted. In fact, whenever hills get really steep, I prefer the motion of walking. The easiest gears to pedal on modern bikes boasting 18 or 21[v], feel like you’ve started going backwards anyway. And what’s the point of going forward even more slowly than if you were walking, just to save yourself the trouble of getting off? Especially when bike saddles are rarely comfortable and seem designed for the streamlined potential they could have if going along fast by themselves. Looking around is easier once walking. Spare your chain the strain. Treat your bike as though it were a horse.

Consider those Westerns where, crossing burning salt flats or climbing the 90° sides of mesas, short of water and overloaded with stolen gold, the cowboys get off. They walk alongside their faithful steeds. I’ve frequently done this to save the strain on faithful bikes. In fact, I often go one better. Negotiating the moors and forests of Simpson Ground last week for example, where the terrain was too rocky or thorny, I carried my bike. This, I’ve never seen in a Western. Even the most selfless cowboy simply isn’t gentleman enough to carry their horse. If things get that bad, they just have to kindly shoot it. Luckily, I’ve never had to shoot any of my bikes – though crossing Spain for the second time in 1990[vi], K and I would probably have shot hers if we had but had a gun.

As a kid I got confused by gears. I thought high gear was the one you used to get up high, i.e. the hill-climbing gear, while low gear – smallest cog and furthest out – was the one you dropped down into for speed. All of which was fine, until I got into an argument with friends or came across one of those incline signs instructing you to assume or “stay in low gear”. Uphill, this seemed crazy. Downhill, why bother to tell you? What were downhills for other than to go recklessly fast? Fortunately, I never fell off. Yet for all their undoubted wisdom, I still avoid helmets[vii], preferring an all-weather sun hat[viii].

Back in 1981, I did go halfway through a hedge when my rear brake cable snapped on a classic Devonshire lane, a sudden dip with S bends down into the beautiful coombe of Huntshaw Water[ix]. It was either the hedge or use the front brake and end up flying over the handlebars and onto the road surface. Shut your eyes tight and put your head down, I remember thinking. All the carrots at the top of my shopping shot past the drawstring of my canvas haversack, some even making it into the field beyond, unlike me. Yet barring the thorns I was still extracting from my face a few days later, I was alright; and once the handlebars were turned upside-down and bent straight on the road surface, so was the bike. That was the last serious downhill on the return journey from Bideford, so I could manage without the back brake. I looked at the cable closely. Had it been tampered with while I was at the fish stall or in the Co-op? Did someone in town have it in for me? What did they stand to inherit? For many years now, I haven’t had a regular bicycle companion. The last one parted from me after a serious argument, ironically at Friendship Junction[x], northeast of Wiveliscombe in Somerset (above). In high dudgeon it cycled off alone, leaving me to perch on the back of my son’s mudguard for the remaining – what seemed like – 400 miles home.

For a couple of years, I was privileged to have loan of a very up-to-date bike, mostly because my son valued it so much, he was worried it’d be stolen where he lived. Burglars and bike thieves in our postcodes were virtually unknown. Had they had the temerity and a good enough compass to find our dwelling, it’s doubtful they could ever have found their way back to civilization.

Despite that it had far too many, the fastest gear of this great machine – provided you could build enough speed to be able to engage it – was incredible. To the north of York on a racing stretch of flat, it reached 549 mph before I was obliged to slow for the 30 limit through Skelton. With hydraulically operated disc brakes, control was easily regained . . . but unfortunately, this very innovation has edged the bike towards its current neglect. In dire need of adjustment, the brakes are now stuck, almost permanently, half on. Aware of my bicycle inventions and improvisations of yesteryore, quite understandably, my son doesn’t want me to “tamper” with these modern marvels of safety.

For several cycles I struggled to continue with this contemporary yet sadly lamed racehorse. At least locking it up was less of a priority, since any thief would be rapidly unnerved by the supernatural way they were restrained from escape. On one long cycle with my daughter it was virtually impossible to keep up. Passing through puddles the rims would hiss and give off steam. Descending Tow Top, by the end of the hairpins, you could have fried an egg on the wheel rims, provided there was a way of stopping the yolk congealing around the spokes. In the warm and dark, this marvelous machine awaits the ministrations of experts. 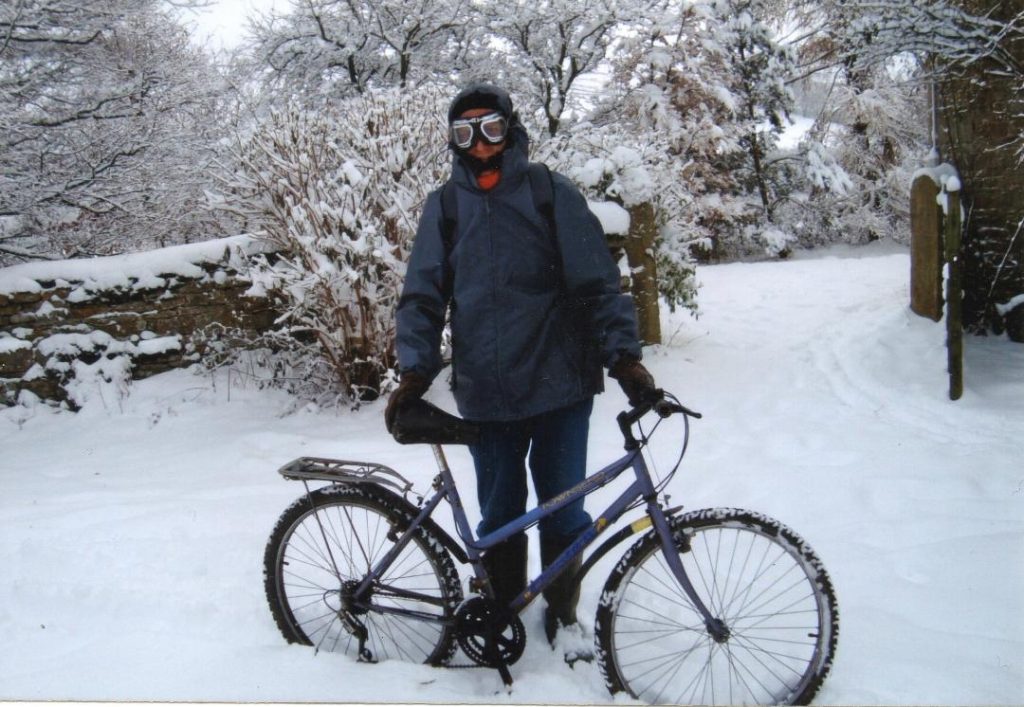 At the other end of the temperature spectrum, the bike above, though undersized, was a reliable friend through seven Northumberland winters. When no car could move it would still cheerfully brave the fells to the nearest shop in Allendale – an eleven-mile round trip. In conditions when not even tractors nor 4 wheel-drives could make it over the summit of Leadgate Bank, it was possible to use their failed tracks: two troughs to the point where they’d reversed or were abandoned. Over the top, the snow was frequently too deep to cycle through. The only way to proceed at such times, was to fling the bike as far through the air as possible, being sure to keep it between the tops of the snow poles, then struggle through the white to retrieve it. Once it was possible to freewheel again, the problem became how to stop. Brakes were not going to work on the dauntingly steep inclines; but to get back before nightfall, required speed. Eventually, knowing the likely positions of under-snow obstacles and aided by lack of a crossbar, I realised the simple solution: career downhill and if necessary, just fling myself sideways into the drifts.

Going back to earlier days, my first bike – solid tyres, no gears, one brake – survived until we got a black and white set and Star Trek appeared on British TV[xi]. This mesmerizing weekly voyage through hazards, hollow rocks and heavenly bodies, soon encouraged me to put masking tape all along my handlebars. As I creaked and whizzed round the block and through alleys, clumsily drawn gauges and coloured lights, indicated everything from imminent aliens to warp speed. For a while I believed in the outer reaches and infinitely benign possibilities of science . . . as well as forthcoming space travel at the speed of light. But then, I was only eight.

[i] Not sure it was ever quite that?

[ii]  The one who from certain angles in certain photos looked like Bob Mitchum – though at other times he looked like a genial Conrad Veidt). See https://internationaltimes.it/environmental-studies-an-extract-from-maze-end-2013/

[iii]  If it could be worked out satisfactorily, I’d still prefer 4 widely spaced gears, like my old Royal Enfield had: https://internationaltimes.it/the-limits-of-control-a-spanish-digression/

[v] Despite that these days I’ve evolved many extra moods between the lazy and the maniacal, even bikes equipped with 18 or 21 gears, have only 4 or 5 worth using.

[vi] The Limits of Endurance, a Digression, I haven’t yet finished writing . . .

[vii] If you think my attitude to helmets & lycra is reckless or anti-fashionista, don’t think you’ll be able to say “Told you so!” should I be involved in a fatal accident, since my last words or thoughts will be “At least I did it the non-lycra way.”

[viii] Worn-out looking, but possessing, like Steed’s bowler, a stainless-steel lining. It can be freely washed without rusting.

[ix] A location that always appealed to me at the time, since what water there was in the unheated caravan I lived in, often froze over during the winter. Even the most medieval, crumbling cob hovel with tiny windows looked cosy, especially with smoke wisping from the chimney.

[x]  Named after the nearby Quaker’s chapel I presume – which clue I should have kept secret as it dilutes the potential mystery of the sign.

View all posts by →
This entry was posted on 11 April, 2020 in homepage and tagged Lawrence Freiesleben. Bookmark the permalink.