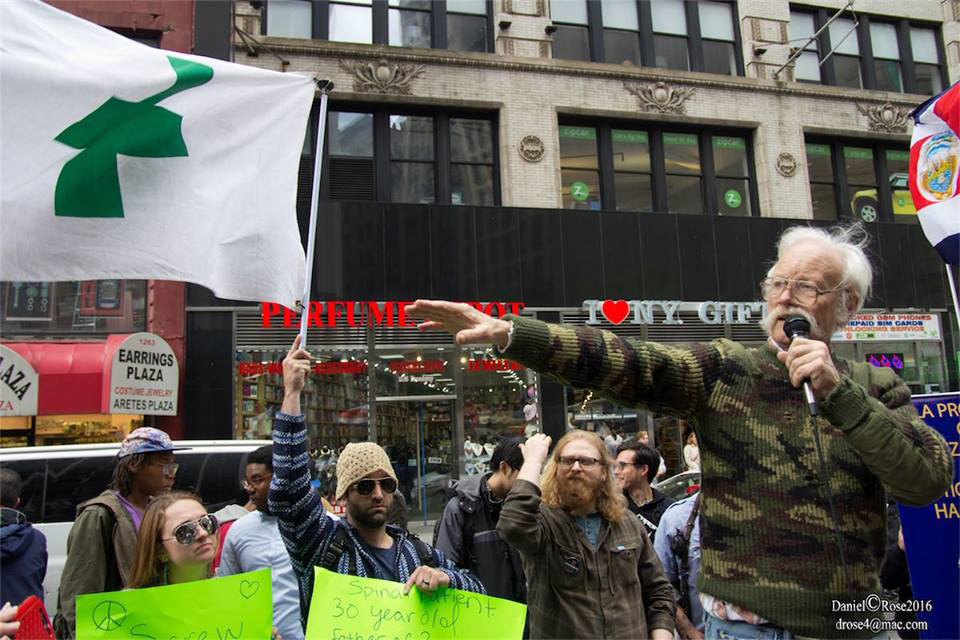 Dana Beal Irvin, the grandee of the free marijuana movement and pioneer of Ibogaine (African plant) use, a free thinking, love preaching, radical of the Woodstock generation, is still busting a proverbial blood vessel in the gut of the establishment. Now, after four decades in a colourful career of counterculture politics, Dana talks candidly to Saira Viola about his consummate struggle for change.

S.V. The political and social tumult of the 60s and 70s created a flowering of hippiedom. As an instigator, participant and dissident of that era, what does counterculture philosophy represent to you today?

D.B.  In 1959 William Burroughs and Allen Ginsberg hied off to South America in search of the Beatnik Holly Grail — a psychedelic CURE for heroin addiction — which they took to be yage. Today we call that Ayahuasca, and people claim it does help. But nothing compares to the African Rainforest cure,  ibogaine, discovered a few years later by a 19 year-old from New Jersey. Howard Lotsof. Lotsof actually tracked Ginsberg down in the Peace Eye Bookstore to tell him about it in 1963, but Allen did not register the gravity of what he was saying. The discovery of the discovery had to wait until Lotsof told me about it, a week after Nixon resigned. I needed it because people blamed me for asking George McGovern about pot and CIA heroin on national TV and supposedly costing him the election. But at first I didn’t understand the full import. It took a little more than 6 years–until after Reagan was elected — for us to start to work on ibogaine, in December 1980.

S.V. There seemed to be a genuine mood of idealism and hope during that time: civil disobedience, protest rallies,  demonstrations all offered inspiration for change. Why do you think there is such widespread cynicism now, yet so many struggles to overcome for the marginalised, disenfranchised and oppressed?

D.B. The same movement has waxed and waned. The problem is humans can perfect the silicon chip, but not the social order. They need the chip to do it for them— and, we see what results.

S.V. You were just 16 years old when you hitchhiked all the way from your home in Ohio to Washington DC to hear Reverend Martin Luther King deliver his historic “I have a dream speech”. What inspired you to do that?

D.B. I was able to get my folks to let me go, and so entered into history. (First coverage in the Washington Post).

S.V. Two months later, on September 15 1963, the Klu Klux Klan bombed the 16th Street Baptist Church killing Addie Mae Collins, Cynthia Wesley, Carole Robertson and Carol Denise McNair, and you organised your first demonstration in Lansing protesting against the Klan. Now, forty years later, we are still witnessing gruesome, unacceptable and unconscionable killings of young black men and women. These are systemic racially motivated killings of black citizens in the U.S. What are your thoughts?

D.B. Well, at least they curbed outright lynching. In the 20’s they couldn’t even pass a federal law against it, and in the 40’s Harry Anslinger ruined Billie Holliday’s life for singing “Strange Fruit.”  Nixon kept pot illegal against the recommendation of his own Schaefer Commission, because putting cannabis and heroin in the same category made the Controlled Substances Act the instrument of political persecution of the Black Panthers and the Yippies!, the lynchpin of the New Jim Crow, mass incarceration and the Southern Strategy. Police shootings affect hundreds; slow death in prison hundreds of thousands.

S.V. Could you tell us about the Yippies (Youth International movement) and the Yipster Times?

D.B. Abbie Hoffman recruited me in January, 1968, because we’d given away 4 pounds of joints to Levitate the Pentagon the previous October. I missed Chicago myself, but got involved again when it was decided to restart the Youth International Party. Our first action was the first Washington, D.C. Smoke-in in 1970 — where we punctured Nixon’s Honor America Day summoning of the Hardhat Legions (there were no hardhats, just some rightwing evangelicals) and overwhelmed Billy Graham’s meager turnout with a spirited antiwar protest. (Everyone else was afraid because the Kent State shootings had just happened.)

After I confronted McGovern we came back from Miami to New York City and started a newspaper, which explored a lot of protests as the war ended, especially marijuana smoke-ins, Rock against Racism, and phonephreaking, which became hacking, which became ubiquitous computers. In the ’80’s we stood foursquare against Reagan and eventually developed ibogaine by the early 90’s, after the paper shut down.

S.V. Most people know you are a passionate advocate for the legalisation of   marijuana and as you’ve expressed, you have a long history of marijuana  activism – leading the 1972 smoke in outside the Democratic Convention. You also founded the Global Million Marijuana March, and were the first point of call for many Aids victims, for New York’s underground medical marijuana network. Are you happy with the progress made on marijuana?

D.B. I’m not done yet. Once again, there is tremendous controversy about the CSA (Controlled Substances Act) and a push to de-schedule cannabis altogether, so it’s not even in the drug law. We need to pass a law abolishing “pothibition”, like the law against keeping slaves, or the Civil Rights Acts of the 60’s.

S.V. You also staunchly support the use of ibogaine for the treatment of drug addiction and highlighted some of the initiatives you’ve been involved in to make people aware of its benefits.Can you explain why you’re so convinced that  ibogaine works and how it differs from other medical treatments for addiction?

D.B. After almost 9 years, eventually someone I really knew took it, and I became convinced. If anyone told you a sufficient dose of a rainforest substance could end heroin withdrawal in 30 minutes and eliminate the habit so that withdrawal never came back, and craving disappeared, you would say it was too good to be true until you became convinced. Eventually everyone who reads this will advocate ibogaine, because it works via nerve growth factor GDNF, so that small amounts given daily, cures Parkinsons and re-sprouts dopamine receptors.

S.V. Turning to more personal travails: Despite suffering two heart attacks and being arrested and jailed multiple times, you continue to agitate and instigate. What’s your secret? How do you keep going in spite of all the obstacles and setbacks you’ve faced?

D.B. I would die of boredom otherwise.

S.V.Finally, on a more relaxed note, if you could share a spliff with anyone living or dead who would it be ? 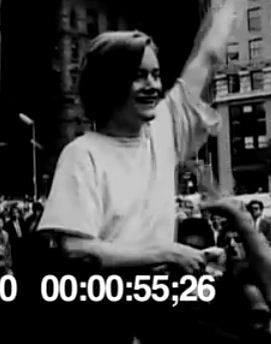 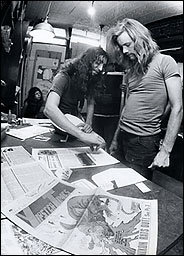 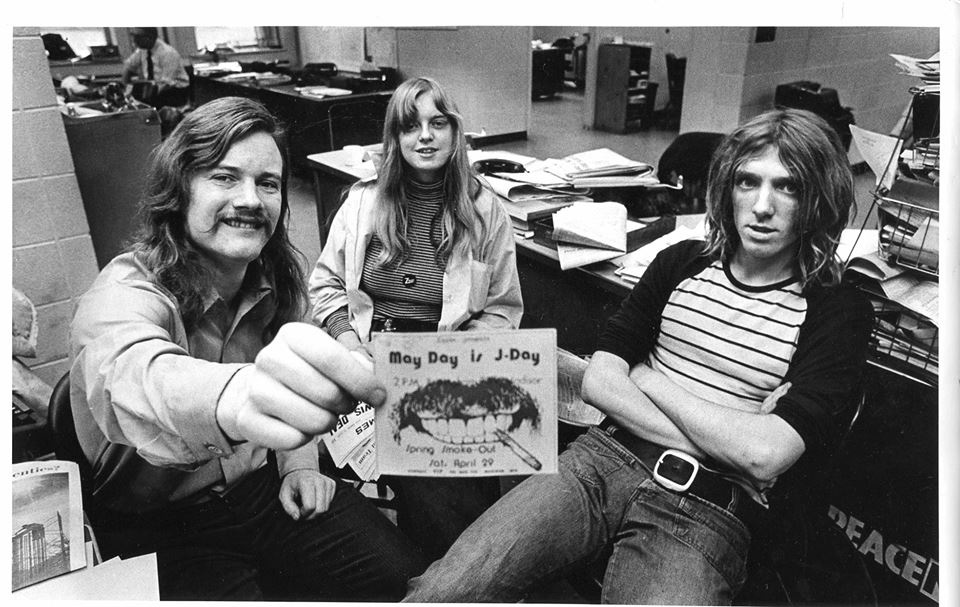 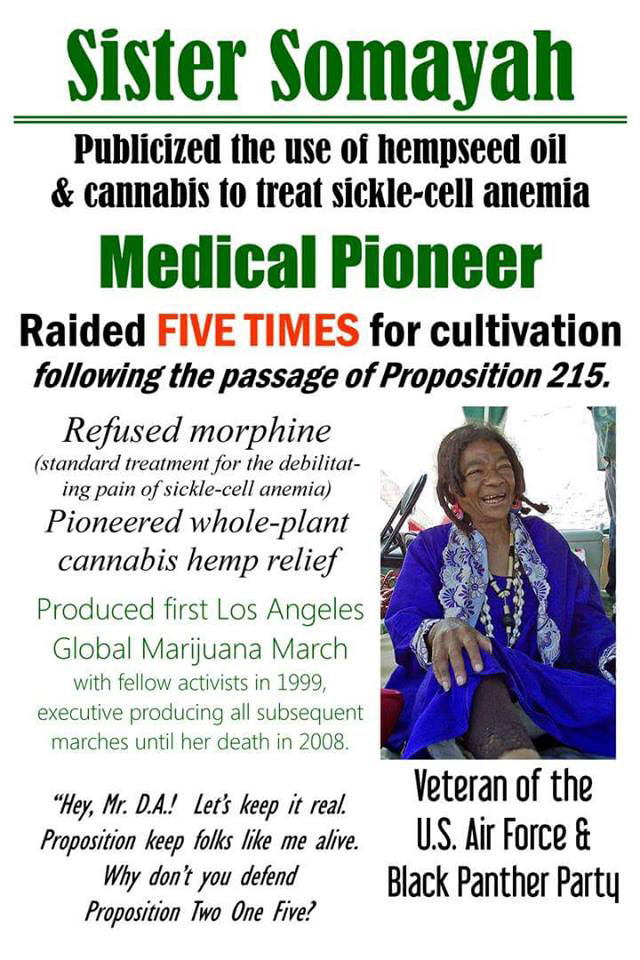 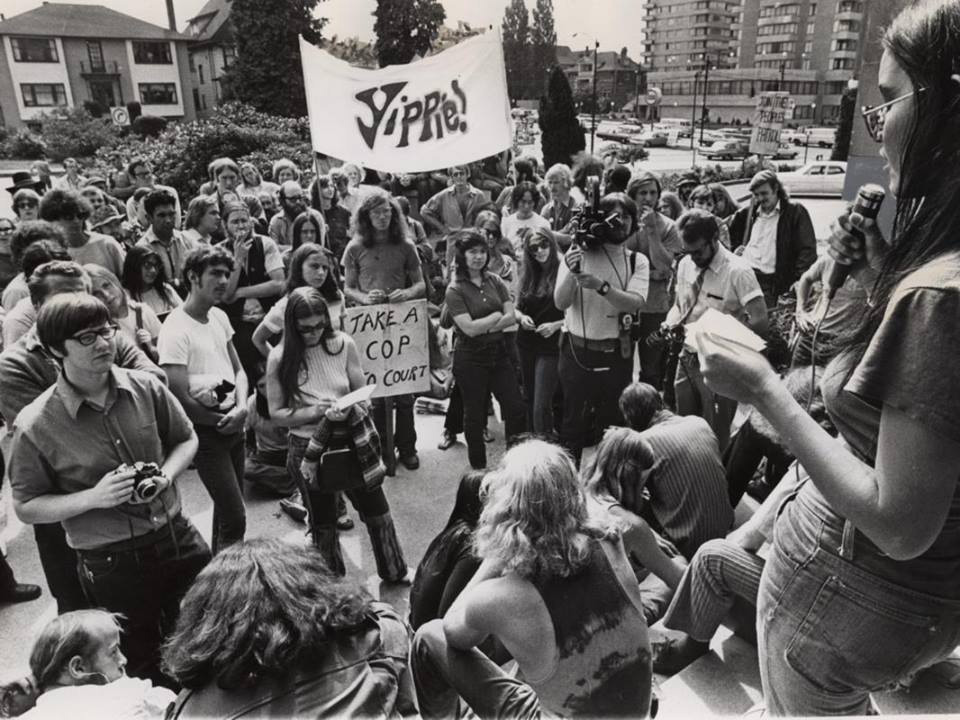 Re-occupy Rally for the Yippie Times 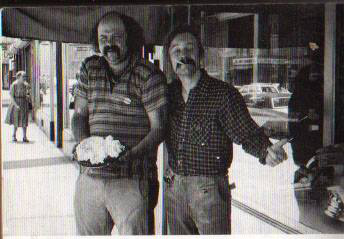 with Aron “The Pieman” Kay

At the NYC cannabis parade 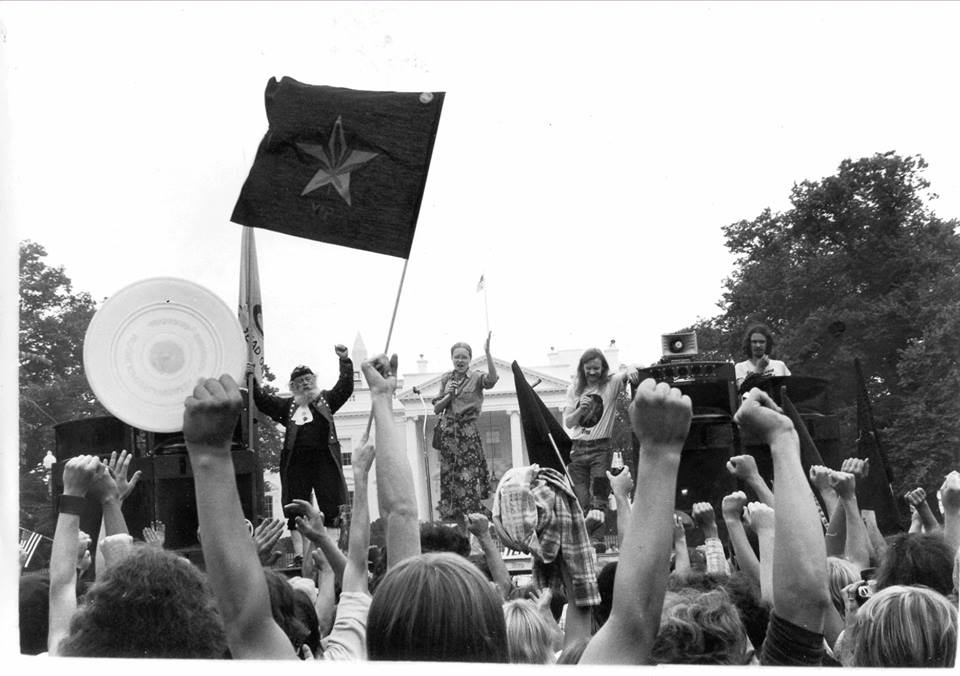 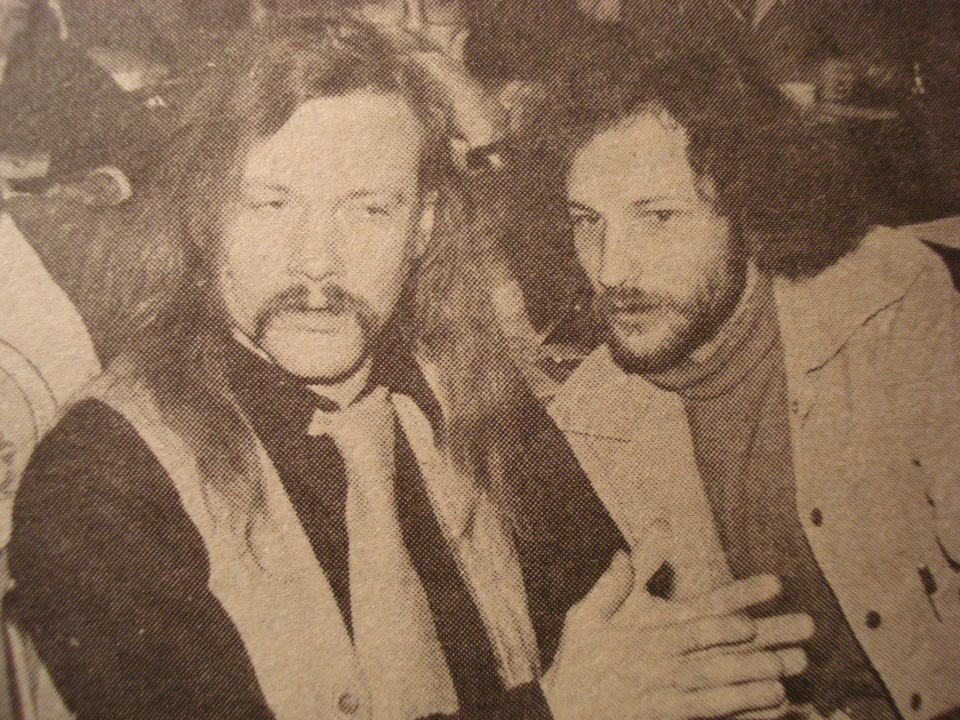 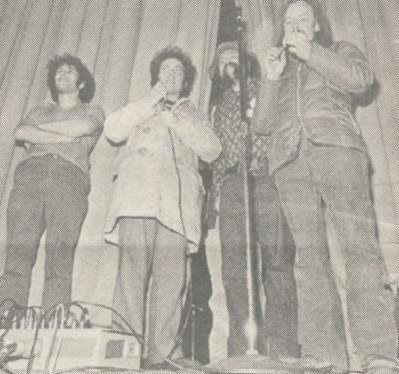 Dana Beal and Jerry Rubin, with Ben Masel, passing a joint on stage 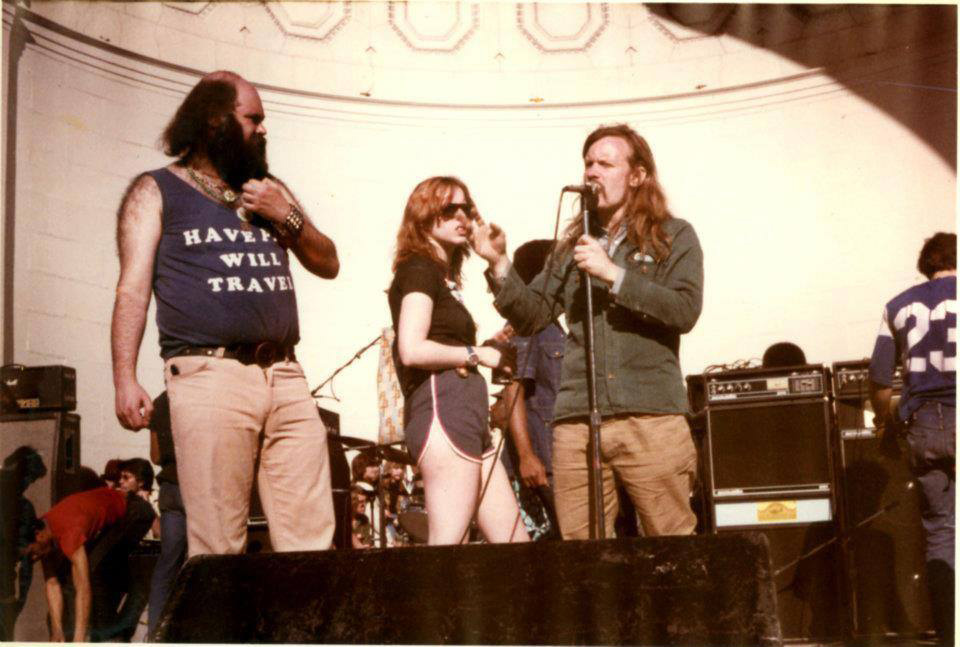 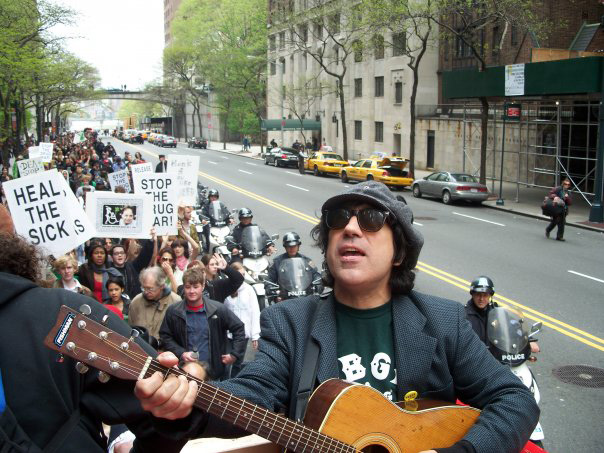 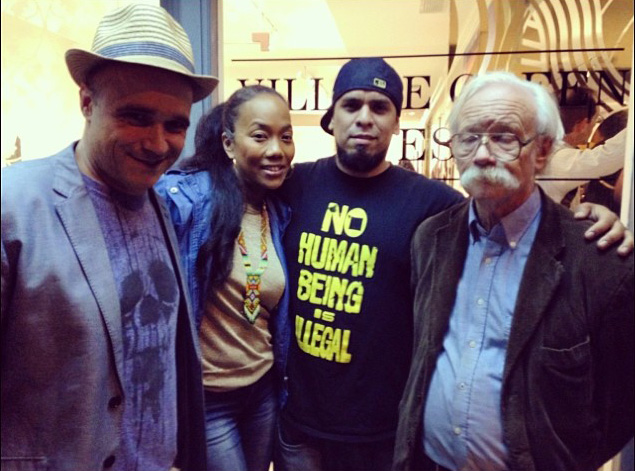 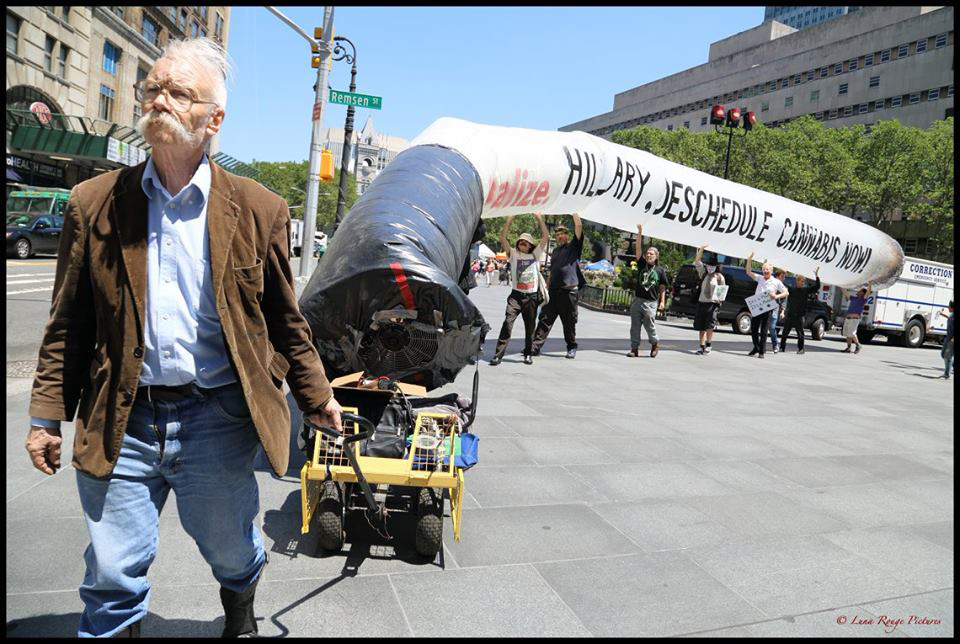 leading the protest to the DNC 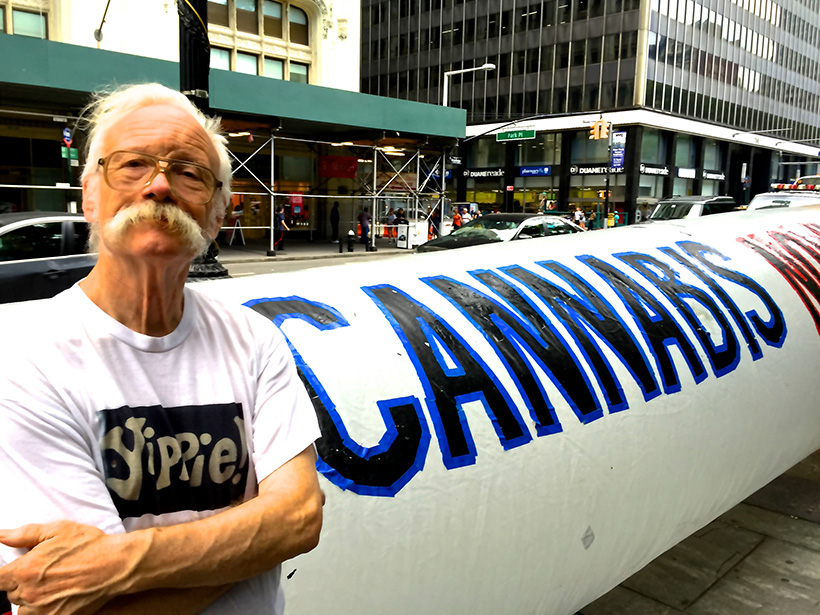 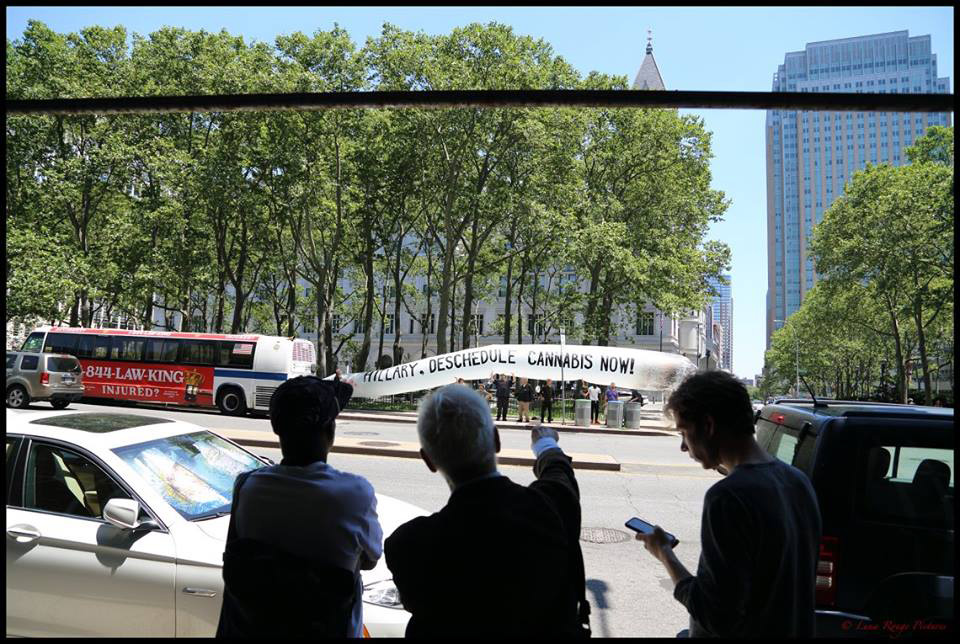 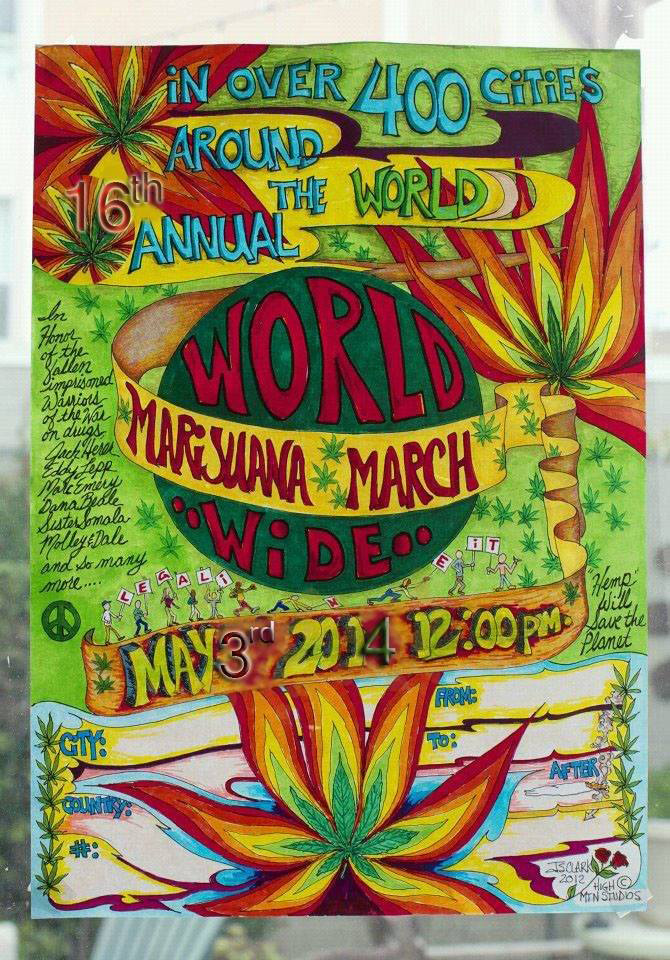