…but do look at the Subtitle – A Life in Six Days of Poems.

An incredible six days, building for this fine collection.  David Erdos was invited to Baghdad for the sixth Babylonian International Festival of Arts and Culture by Oud master Ahmed Mukhtar.  So off he went, with some trepidation  – this was not Hay on Wye.   Even the Gatwick check-in is scary.   Does he get through?  The ticket looks dodgy.  He does, to meet up with his travelling compadres, guitarist  Ignatio Lusardi Monteverde and Richard Dumbrill.  This Gatwick to Gatwick odyssey via the festival, new poets, and new love is thrilling as well as profound poetry. It’s as if you are there with him, as told in real, sequential time.

The poems are the fruit of two notebooks in the poet’s travel bag. Notebooks constantly being fed by thought, feeling and observation of his experience, some emerging as new poems, some notes that he forms up later ‘…I wrote constantly, capturing what I felt and observed as quickly and as artfully as I could, before reaching the point that as I was writing one poem, I was making notes about the writing of another. This is poetry as a way of functioning – breathing if you like.

He arranges a triptych; Travelling, Journeying, Arriving.  Note the subtlety of difference between travelling and journeying; the words are similar but the experiences worlds apart. If travelling is gruelling, then journeying (at the festival) is rich and often sublime. Arriving takes us to another, more emotional fulfilment, and, at his own admission, revival.

The list of titles contain their own story, and forgive the few lines taken from the whole.   Before Babylon – ‘As I sooth each tense breath with reason.’ Our Own Waters.  Through an Airport Window. –

‘My feared journey eases into a source of developing calm,
Slow delight.  The journey is yet to begin, but look at the sky:
It is purple! Already the world is re-ordered
And the agenda reset for hindsight.

Visa Vergo Vertias. Softening. Dumbrill’s Discovery. Richard Dumbrill – an archaeomusicologist  (don’t you know) is a marvellous find, with his own topsoil and weather. He asks Erdos to write a dirty Babylonian limerick on the plane – which he does.  Compression –  ‘My pen bleeds in the heat.’  Erdos even gets fine verse from Iraqi Airline Food.

And that’s just the journey out.   His attendance and later reading at the festival is for  and with people who love poetry in a part of the world where it’s neither niche nor precious, but enjoyed by the masses;  Iraqis, Syrians, Iranians, Libyans and others from Arab states.  And so with JOURNEYING;

Of the Yellow Day

The yellow is a thick envelope making us the scorched letters in it,
As we write about these locations in which re-interpretations of life never cease.
You can breathe yellow here. The day in sleep, stoops to yellow.

To walk where they believed Eden was, and where the Sumerians would have gardened,
To give your small word creation in the shadow of that is profound. The blood rises.

The Moment Before Reading

I read to honour the place and use my actor’s voice to declaim this.

The key festival poem, Towards Babylon, follows  (but it’s not the nugget, there are plenty of those).   This poem contains a voice within a voice.  It changes, as does the font.  This is the one for the festival not just this book, and an audience of over 2000 people rapturously receives it.   Poet Ehab Almalachi also reads and Erdos, (the democrat), makes his own comment …

Politics in such a place can hardly be ignored.

This is a poetry as the pulse for a slowly recovering nation.
This could never happen in England as all of its standards are glazed
By celebrity’s shit and an ignorant hold across country.
Whereas here, Versed expression and the housing of such, achieves fame.

He celebrates other artists too.  On watching Ahmed Mukhtar play –  ‘A rock star of the sand dune, a traditionalist of the new.’

By now we have met Mosquitoes, Mosques, the indefatigable Dr Ali, Summing Up, Assignments, and The Persian, the woman who captures his heart. The last 20 poems are about her, the suspense of dying phone batteries included, as he tries to make contact before he leaves.  Story of a Last Night.  Would the poet meet her? Had something happened, and then (poetry spoiler alert)

I could only write a letter and hope that at some point you would find it.
My accent is difficult for you, so now the written word had a function,
Containing everything I’d become. As I started it in the hall you walked through the door.

And the sorrowful word play of Mourning of the Day Before We Leave.

This is rich stuff – with a lovely story arc – poetry that fuses thought, feeling and narrative.   His prose postscript…

To walk the grounds of a place of such historical, political and spiritual importance was the truest privilege I could imagine. It is almost inconceivable to me that a dream of that sort found the flesh.

And the poetry of course!

I have lived an entire life in six days;
Fear, regard, the romantic 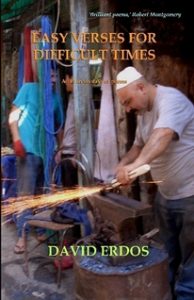 View all posts by Jan →
This entry was posted on 11 May, 2017 in homepage and tagged David Erdos, Jan Woolf. Bookmark the permalink.