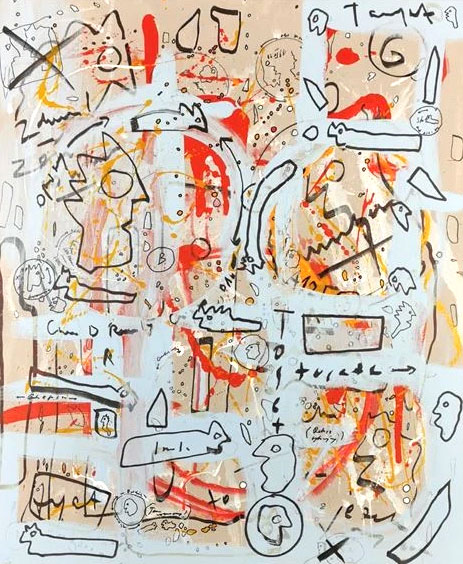 I am reading your poems and have been

reading them in English now for years. I bought
your book Wybor (there should be

in Polish, so sometimes I just look at it, occasionally
look up a couple of words. Some of my ancestors

lived in Poland, but that was well over 100 years ago

and I can’t remember if I ever knew where they lived
there. Before I began this I was thinking

that one of the things that you do
that I enjoy

is talk about various news stories, and I suppose

I will tell you about a story I read today about
Nathan Wayne Entrekin, who wore a Roman gladiator costume

You may find it heart-warming to learn
that he stayed in touch with his mother during his adventures,

shooting videos of himself that he narrated. “I’m here, Mom!”
“I made it, Mom. I made it to the top. Mom, look, I made it

to the top, to the top here. Look at all the patriots here.
Haha, if I can make it up that, anybody can.”

This boasting to his mother during the crime sets him apart
from, say, one of the newsmakers you have immortalized,

Bryan James Hathaway, who you note (in your book
Kopenhaga) was arrested for having sex with a dead

deer. I imagine that if Hathaway did go to prison he tried
to keep his crime secret, whereas Nathan Wayne

put his exploits on the internet for his mom, who
perhaps complimented him at one time or another

for his gladiator costume. At one point he says
to his mom, “I wish you were here with me.” Impossible

to imagine Bryan James videoing his mother at the scene
of his crime, though

I suppose there are stranger things that have happened
here on Earth. (Are there?) Anyhow, it has been fun

writing this for you, though if my mother were still alive
I don’t think I’d want her to read it. She wouldn’t need to know

Gregorz Wroblewski is one of Poland’s major contemporary writers. He was born in 1962 in Gdańsk and grew up in Warsaw. Since 1985 he has been living in Copenhagen. He is the author of many books of poetry, drama, and other writings, a number of which have been translated into English. And as a visual artist, he has exhibited his paintings in galleries in Denmark, Poland, Germany, and England.

Tweet
This entry was posted on 21 August, 2021 in homepage and tagged Gregorz Wróblewski, John Levy. Bookmark the permalink.