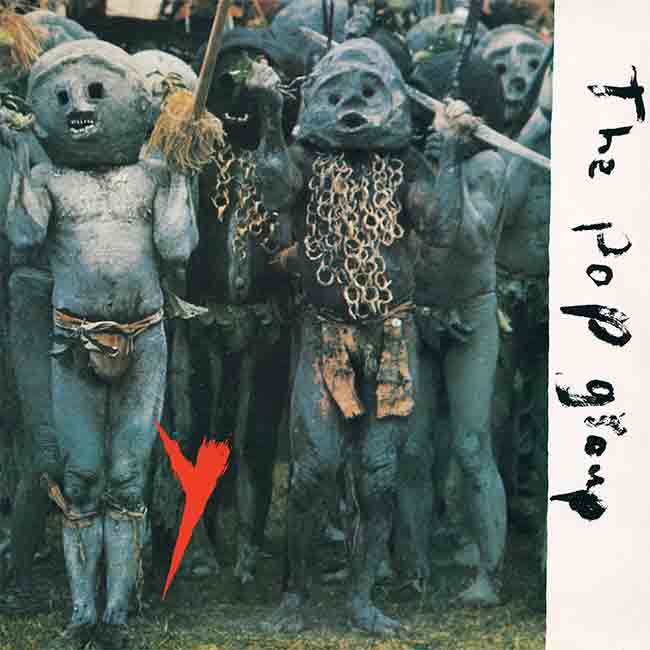 The Pop Group formed in Bristol and swiftly made a name for themselves in the music business, supporting the likes of Pere Ubu and Patti Smith, and then appearing on the cover of music weeklies NME and Sounds. Their chaotic and original freeform music mixed funk and dub overlaid with politically and revolutionary lyrics delivered by Mark Stewart, their lead singer, who was renowned for his interests in both conspiracy theories and cut-ups.

Now, it’s the time for a new, definitive edition of the Pop Group’s 1979 debut album Y (the first of three Pop Group albums from their original incarnation). It comes as a 3-CD box set, with a remastered original album, Alien Blood – a ten track album unearthed from the original studio tapes, Y Live – a set pulled together from a number of different concerts, and, of course, the 12” mix of the incomparable ‘She Is Beyond Good and Evil’.

Y remains a startling and shocking album, an aural blast between the ears that refuses to compromise musically or lyrically, or relax for one single moment. It’s intense, chaotic, energetic and surprising, drawing on many musical genres of music to find its own experimental trajectory as produced and treated by dub maestro Dennis Bovell. If anything the live album is even wilder, sometimes almost to the point of verging on the shambolic, but never losing its energetic impetus and musical abandon and energy. Alien Blood works more as an archaeological dig, sometimes focussing on the rhythmic underpinning of unfinished tracks, elsewhere offering more basic or less dubbed and treated versions of final tracks, remixes, work in progress, and alternate takes. Some of these are superb, particularly the viscerating ‘Ricochet’ version of ‘We Are Time’ and ‘Blood Money (Slow Thief)’.

I wanted to find out more about The Pop Group, so started a short interview with Mark Stewart by asking about the original line-up, before moving on, hoping for a discussion about his later solo work, such as the Learning to Cope With Cowardice LP; his version of ‘Jerusalem’, that stitched together choirs, crowd chants, ambient sounds and goodness knows what else, to resurrect Blake’s poem as an electric mantra, freeing it from the Imperial and Colonial shackles it had become chained to; and the work of the reformed The Pop Group since 2015. We didn’t really get very far, but here’s most of what we came up with:

Rupert Loydell (RL): You’ve previously talked about The Pop Group being ‘like having three cars crashing’. Can you talk about that car crash? I’m assuming it wasn’t just the personalities, but the mix of punk, funk, reggae and dub influences on the music?

Mark Stewart (MS): Especially at the early concerts, because of our punk mentality we weren’t really looking at each other because we were staring at the audience so for me it sounded like racing cars with each member of the band heading in different directions down the chicane.

RL: Your solo music continued and continues to be fuelled by your love of dub, but also includes elements of (for want of better labels) hip-hop, techno, electro, grime and noise to at times produce a much harsher sound, without the underpinnings of funk. Is that a fair comment? How do you manage to engage with new music and sounds so energetically and quickly? How absent or silent can the beat be and still affect the listener?

MS: The secret of change is to focus all your energy not on fighting the old, but on seeding the new. Attention is an alchemy that turns anxiety to beauty.

RL: You talked about juxtaposition and collage with Mark Fisher in 2008, and your love of dub, and said you were ‘as excited now finding weird things or parapolitics as I ever was’. Tell me why you’re still excited by weirdness, and the bizarre world around us, and what remixing them together – lyrically, visually and musically – achieves.

MS: As the juxtaposition in the title of Mayakovsky’s 1918 film The Young Lady & The Hooligan suggests, the invective is often to shock out the indifference to, hostility towards our STRAY DOG CABARET. Any short-sighted endorsements of their bankrupt ideologies stems not only from the association of ethical and para-aesthetic values, but also from a dislike of what was facile and shallow. And betrays a sort of reluctant aberration in them for the vitality of the monsters they expose.

RL: Are you still as angry and upset as you previously were?

MS: If you’ve ever been called defiant, unruly, rebellious, incorrigible or too forward I think you’re on the right track. Turn your hurt into healing, pain into power and wounds will become wisdom.

RL: I’ve always thought of you alongside Crass and Cabaret Voltaire, not musically, but politically, as dissecting and deconstructing the world around us, and living out what your records say. Massive Attack’s recent concerts have been very politicised, too, and done the same. In 2017 you said ‘the whole political system is an illusion’, but – at the risk of sounding like Thatcher, which I have no desire to do – isn’t most of society, politics and perhaps even music (certainly the business side) an illusion too?

MS: Yes, it serves as a pretext for an elemental, orgiastic explosion to interrupt the reading.

RL: How does that, however, sit with what you said to Mark Fisher, namely that ‘the political and the mystical go hand in hand’. Is that because both the mystical and political are illusionary, or because there is a deeper mystical truth?

MS: I refer to the unconscious development of ancient crops, the occult technology of power.

RL: And are you still ‘as much a theory slut as the next person’?

MS: Totally, Deleuzean to the core. And I take three tablets of Baudrillard with my organic oat bran. It keeps you regular don’t you know.

Stewart may not make life easy for himself or any would-be interviewer (he claims in his defence that he doesn’t think linearly; and his wit and knowledge shine through), but The Pop Group’s music, along with Mark Stewart’s solo music, despite having often been regarded as cult or underground music, remains important and belligerently non-conformist. Yet, music distribution and the music business have changed so much that those terms hardly seem to mean anything any more. Punk and post-punk opened up doors for would-be musicians back in the day, and only now it seems is much of this music getting overdue reconsideration and reassessment.

If The Pop Group’s 2015 reformation was sometimes regarded cynically as a financial rather than artistic act, it’s now clear that the time was just right and The Pop Group was exactly what was needed. It’s been good over the last few years to have them walk the edge of musical chaos in public whilst exercising their splendid showmanship and intensity to once more provoke us into thinking about the world around us in new, if sometimes paranoid or askew, ways. This is not a band who have sold out or lost their ability to dream or to provoke and disturb.

The Pop Group’s recent albums have been as timely and original as their earlier work, but the first music they recorded so long ago continues to age incredibly well, seeming more and more out of, or perhaps ahead of, its time. This box set proves the point and is cause for celebration (and purchase). Besides, who needs an excuse for a party? Happy 40th anniversary to one of the best albums ever.

View all posts by Rupert →
This entry was posted on 28 September, 2019 in homepage and tagged Definitive Edition, Don’t Sell Your Dreams, Rupert Loydell, Y. Bookmark the permalink.