‘I HEAR YOU SINGIN’ IN THE WIRE’: GLEN CAMPBELL IS STILL ON THE LINE

Posted on 28 September, 2019 by Andrew Darlington 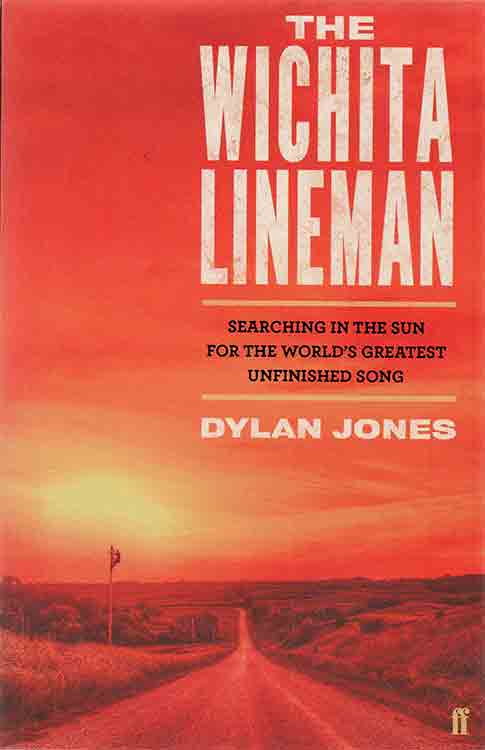 Book Review of:
‘THE WICHITA LINEMAN’

The heartbreakingly raw TV-documentary of his final tour, ‘Glen Campbell: I’ll Be Me’ (2014), shows Alzheimer’s robbing The Rhinestone Cowboy of even his own songs as he good-naturedly struggles through each performance. This fine meandering anecdote-strewn book goes some way towards shifting attention back to his finest years, when, as if by some fortuitous cosmic alignment Campbell found himself collaborating with Jimmy Webb on some of the most cherished Country-Pop records of the era. Subtitled ‘Searching In The Sun For The World’s Greatest Unfinished Song’, former ‘GQ’-editor Dylan Jones artfully teases out their complex joint history. It’s a book that unfolds like a novel. Or a screenplay. In which separate lives converge, unbeknown to each other, yet as if destined, into a creative partnership that ‘would turn out to be alchemic.’

Although frequently seen as little more than a Rhinestone crooner with a ‘pleasing down-home smile’, there’s more to Glen Travis Campbell than that. Born 10 April 1938, he came from the extreme poverty of Delight, Arkansas, the seventh son in a sharecropper family of eight boys and four girls. He was a protégé, playing with his uncles’ country band, then his own Western Wranglers group, before taking his five-octave vocal range west to hustle his way into the LA music scene by doing session work and commercials. He scored a minor 1961 hit with “Turn Around Look At Me” for producer Nik Venet, but more significantly was part of the elite Wrecking Crew who played on sessions for everyone from Ricky Nelson and the Monkees to Elvis Presley, and he stood in for Brian Wilson during Beach Boys tours. As a studio guitarist he plays on “He’s A Rebel”, “Surf City”, “I’m A Believer”, “California Dreamin’”, “I Get Around”, “Viva Las Vegas” and many more. It’s possible to forgive a track record like that just about anything. Sure, he was a card-carrying Republican who had an early hit with Buffy Sainte-Marie’s anti-war “Universal Soldier”, but promptly declared that draft-dodgers who burned their call-up papers should be shot! Yet he championed ‘New Nashville’ songwriter John Hartford with a major hit version of “Gentle On My Mind”, and later promoted Kinky Friedman, Merle Haggard and Kenny O’Dell to wider audiences.

Yet how is it possible to confabulate an entire book out of just one song? The single that entered the ‘New Musical Express’ chart at no.30, 8 February 1969, and by 22 March was peaking at no.5 beneath Marvin Gaye’s “I Heard It On The Grapevine”, but ironically one slot above Dean Martin’s own snooze-along version of “Gentle On My Mind” which was on its way to a high of no.2 a fortnight later. In the States Glen had already reached a ‘Billboard’ no.3 with “Wichita Lineman”, 16 November 1968, and it’s an anomaly of a hit record – a ‘countrypolitan’ Torch-song so at odds with the year of protest, riot and counter-culture insurrection. Unlike Dylan Jones, I was never seduced by the cheesy allure of lounge-core, but it’s impossible not to recognise the lush lavish simplicity of this ‘prairie gothic’ poetry. And thereby hangs several tales.

Jimmy Layne Webb was born in the Elk City, Oklahoma flatland in 1946. Starting out trailer-trash he was ‘hungry, and ambitious beyond his years.’ Next, he happened to hear Glen Campbell sing “Turn Around Look At Me” on the radio, and knew his future lay in song. Moving to LA his first $400 songwriter royalty cheque came from “My Christmas Tree” recorded by the Supremes on their 1965 ‘Merry Christmas’ album. Next Johnny Rivers teamed Fifth Dimension up with his “Up, Up And Away” for his Soul City label – and it hit no.7. A misfit caught between his vague hippie tendencies and his Burt Bacharach tendencies, the first Glen Campbell collaboration came when he recorded Jimmy Webb’s “By The Time I Get To Phoenix”. By then Webb was making his own mark with what Dylan Jones calls the ‘ferociously eccentric’ “MacArthur Park”. Although the Association had already rejected it, the rasping Richard Harris actorly sing-talk reading of the 7:21-minute oddity carried the record into the Top Ten. Making Harris a ‘Tramp Shining’ indeed. Jimmy Webb was still barely twenty-one.

There’s an argument that technical vocal perfection only becomes vogue during sterile times when very little innovative or creative is going on. As in the bland early-1950s… or now. Yet the combination of Campbell’s pitch-perfect yet middle-of-the-road pipes as vehicle set to Webb’s story-telling melodies proved instant magic. The first thing he said to Jimmy Webb when they met was ‘get your hair cut.’ Cynically, Glen Campbell needed hits. More generously, he recognised the potential of a quality song regardless of its provenance.

From its Carol Kaye bass lead-in, to the staccato morse-code effects in the fade, “Wichita Lineman” consists of just sixteen lines. There’s no traditional linear structure – no chorus, just a story-song that refuses to be framed by genre. Less is more. A lot of the classic American Songbook of Irving Berlin or George Gershwin has that yearning Jewish wistfulness that touches an inexpressible chord within us all. Webb – ‘the Master of Sad’, adds a hippie ambiguity to that melancholia, he ‘embraced the Great American Songbook by disrupting it.’ Is “Up, Up And Away” about getting high, or simply a flight in a hot-air balloon? Why was the cake left out in the rain? What does a Wichita Lineman actually do? Does he check and repair telephone cables? Cut from a rough cassette-tape demo-in-progress, which makes it ‘the perfect imperfect song’, Mark Ellen suggests ‘it doesn’t explain itself. You have no real idea what it’s about.’ That it’s a blue-collar image of ‘a telephone repair man listening to, and falling in love with, a woman singing down a phone line – if indeed that’s what she was doing, is bizarre to say the least.’ But it’s a road-map to a state of mind, a working-man’s Blues.

There were future hit collaborations, including “Galveston”, a Webb anti-war song that Campbell tweaks until the message is defused, he even appears in military uniform in the promo video. Yet there’s a sense that this story loses its way mid-point, with Dylan Jones listing various subsequent cover versions and remakes, and then musing instead about the magic of Brian Wilson – who wrote “I Guess I’m Dumb” for a Glen Campbell single that resembles a lost ‘Pet Sounds’ outtake. Glen Campbell’s own career nose-dives into all the usual cocaine, alcohol and divorce twists until he ‘embraces Jesus’ in the regular sad salvation dénouement. He died 8 August 2017 leaving a back-catalogue of lucrative ‘Greatest Hits’ compilations. While Jimmy Webb fulfils his own ambitions in performing his songs onstage himself and through a series of albums, although there’s an argument his genius works best as a writer-conduit channelled through other talents, such as Art Garfunkel whose 1977 ‘Watermark’ album consists of no less than ten Webb songs.

Yet every once in a while, on the radio, you catch the haunting “Wichita Lineman”, still singin’ in the wire, still suspended from the telegraph pole lost in the endless flatland, still on the line…

View all posts by Andrew →
This entry was posted on 28 September, 2019 in homepage and tagged Andrew Darlington, DYLAN JONES, THE WICHITA LINEMAN. Bookmark the permalink.

One Response to ‘I HEAR YOU SINGIN’ IN THE WIRE’: GLEN CAMPBELL IS STILL ON THE LINE