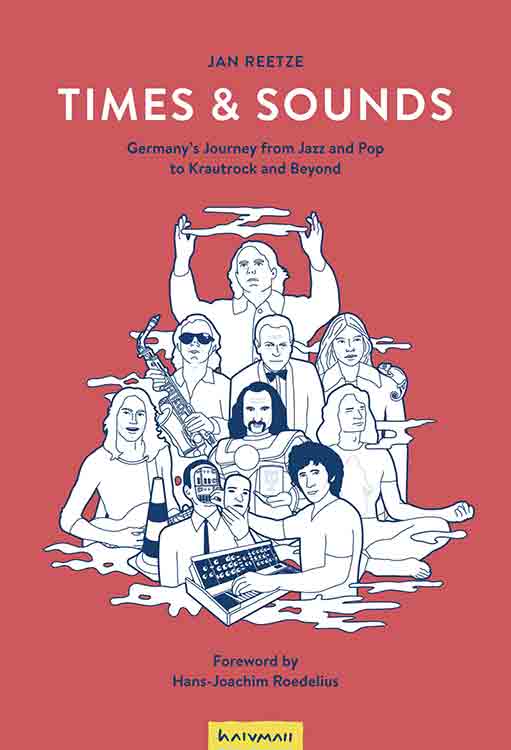 There are two major problems with Jan Reetze’s new book about krautrock. The first is that English is clearly the author’s second language and his use of the idiomatic and vernacular is often painful to behold: it’s hard to know why he didn’t get anyone to read his manuscript through for him. The second, which is more problematic, is that he is a pedantic and dull writer, who loves lists, asides and long-winded contextualisation rather than focussing on the supposed subject of his book.

Germany was not alone after World War 2 in reverting to tried and tested national music forms, nor in its population seeking stability and nostalgia as a kind of comfort as society attempted to return to ‘normality’ and put aside what it had gone through. Nor was it alone in its culture of youth clubs, coffee bars and localised music scenes, nor its familial society; a brief summary of this would have helped trim this oversized volume down. Instead we get descriptions and lists of obscure German bands and pop songs which will mean little to most European readers; the detail on offer does not help us understand the music which readers will have bought this book to find out more about.

The USA, of course, was the country swiftest to recover from WW2, and the first to produce a nation of teenagers with disposable income. Somewhere in the rock & roll clichés of Happy Days, American Graffiti and Elvis Presley is a kernel of truth: a musical and fashion rebellion that led to imitation and appropriation throughout the Western world. It also fuelled local variation, such as skiffle in England, and krautrock in Germany.

Once Reetze actually gets to his version of the story of Germany’s new music, music which drew on the nation’s specific jazz and pop traditions to adapt rock forms into strange new music, the book becomes more interesting. All over Germany, clusters of musicians were recording long-form improvisations, electronic experiments and drug-fuelled wigouts; slowly there was critical recognition and touring networks were set up. The music was championed here and there (the UK being one such place), and the racist name given to the wide-ranging genre stuck.

Apart from the occasional awkward language and long-winded digressions, my main problem with the text is that it doesn’t spread wide enough. In hindsight krautrock is simply part of 1970s musical experiment; bands such as the Silver Apples in the USA or Hawkwind in the UK are also undertaking countercultural experiment, playing alternative musical festivals and slowly being signed up by the more attuned record labels. And apart from the hippy wigouts there are clear links to what has become known as postpunk music, music that emerged from punk (or re-emerged after it, having avoided what could be seen as simply rehashed pub rock), bands which weren’t afraid to draw on and reinvent progrock and krautrock for their own ends. Simple Minds’ Real to Real Cacophony LP and This Heat’s first two albums immediately spring to mind; and Julian Cope has written extensively about his engagement with krautrock, whilst Nurse With Wound’s first album, Chance Meeting on a Dissecting Table of a Sewing Machine and an Umbrella, included a list of obscure albums which they regarded as required listening, many of which were krautrock obscurities.

So I have mixed feelings about this book. It’s beautifully produced ­– although it has a naff   cover illustration, and hidden within it is a huge amount of information and contextualisation. It also has pages and pages of irrelevant and tedious musical history that doesn’t add much to our knowledge of krautrock. On reflection I’d probably rather have the ecstatic ramblings of Julian Cope in his Krautrocksampler book or David Stubbs’ Future Days: Krautrock and the Building of Modern Germany, which gives us a more focussed take on this wonderful music.

View all posts by Rupert →
This entry was posted on 28 November, 2020 in homepage and tagged Jan Reetze, Rupert Loydell, Times & Sounds: Germany's Journey from Jazz and Pop to Krautrock and Beyond. Bookmark the permalink.