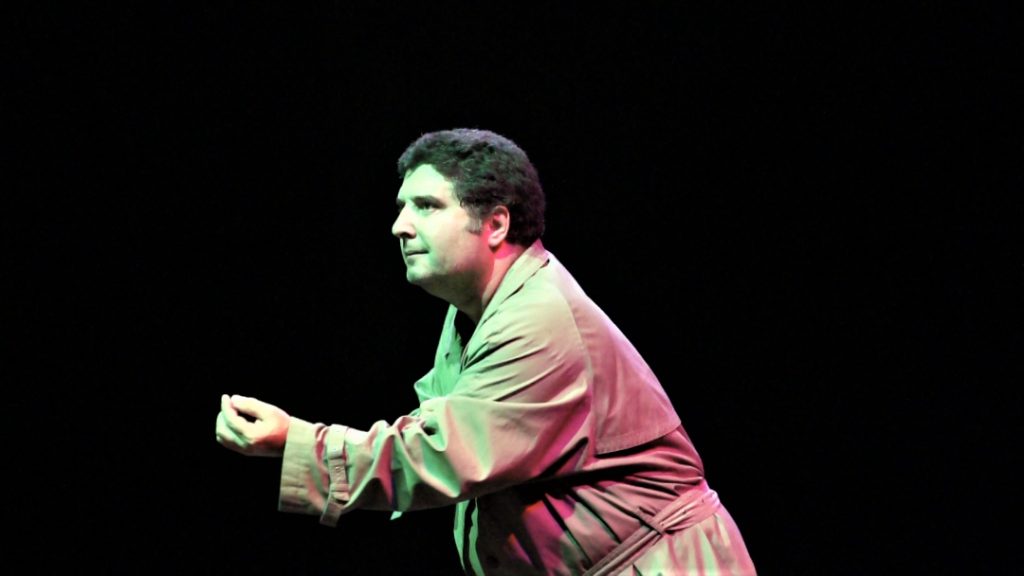 A highly charged one-man show by David Erdos on the end games of two of his comedy heroes, Tony Hancock and Lenny Bruce.

This remarkable double bill opens with a performance of Hancock’s Last half Hour by Erdos’s friend and mentor Heathcote Williams, but the performance is Erdos’s own – and it is this fusion of writer and actor which channels Hancock so effectively.  In that sense it’s a threesome. While talking to a stuffed moose head, we hear of  Hancock’s life, loves and daunted creativity.  Many of us grew up with Hancock’s Half Hour on the telly, the lugubrious funny man with the hangdog face, riffing off Sid James, embodying the hapless clown with the inverted smile.  Shrugging off his suicide in a Sydney hotel room in 1968 as sad, there wasn’t the sophistry in us to know about the depths of despair he suffered, or the fact that despair, like the hidden mass of the iceberg, drove the work – as it does so many ‘funny’ people. As Alfred Hitchcock observed, comedy is based on anxiety, giving the example of the dropped baby, which, when caught quickly, laughs.  We were all caught laughing, but nobody caught Tony Hancock, who’d sacked his supporting performers and writers Galton and Simpson, leaving no emotional or creative foundation. Alcohol and pills were the shifting sands of dependency.  In one heartrending moment, Erdos throws pills, one at a time down his throat – alternating with ‘I’m funny’  ‘I’m not funny.’  There’s also the comedic moments of two black outs – first blackout ‘that’s yours’ final one – ‘that’s mine’.

And so, from a Sydney hotel room to Brooklyn.  Lenny Bruce had wildly different material, yet the same existential difficulties.  Bruce was the first comedian to take on and fuse sex, politics and religion on stage, when the ‘blasphemy’ laws were rife.  Puritan America could do the obscenity of war but not the human orifice.  Bruce the hero – or martyr – changed all that and we can thank him for the freedom of speech we have today.  If the Hancock piece was a three-way, this is a double act, with Erdos, through his own writing channeling Bruce right in front of us, the accent and timbre of the performance impeccable, challenging the audience to stay with him through uncomfortable material.  But discomfort, if handled well – and this was – leads to change. It’s the sort of stuff (raw, sexual, visceral, not scatological) that can make an audience leave if there’s a crack in the handling or delivery – and there wasn’t. Clever use of a toilet seat carried around by Erdos – part symbolic of the manner of Bruce’s death and part ‘framing’ material that was anal in content.  Showing the audience pornographic images was brave, requiring us to look at something in public that is usually looked at in private.

Dirty, huh? Yeah. Oh, man..its a scandal! But you know what they say: make something good, bad and you miss out on the extra, you miss out on the magic that made that dirty thing come to be! Because if this had been real we could have called it illegal – in a public space – but without that, its funny; a partially emphasised dick!

At least in my time. Not now. Now, you get these things in soap opera. Spunk bubbles are funny, but they leave you stained, man, not clean!

Ripping off the trademark dirty mac to reveal a Christ-like loin cloth felt like a dangerous moment, until it was turned into a sublime one as Erdos ‘crucified’ himself on the cross of a ladder and wooden beam to the music of Wim Mertens – No Plans No Projects.   This synthesis of music, language and image was creatively sublime – the dialectical opposite to that of the squalid toilet seat in photos of the hero of the underground naked and dead in his bathroom after a drugs overdose. That image, published in US newspapers, was intended to demean the man, yet Erdos raised him to a state of grace; a benediction for the ‘sins’ of the audience.

Erdos brought forth the poetry in both Hancock and Bruce via the poet in himself.  In elevating each ‘comic’ to a state of grace, and reflecting on their final moments we learn about the core, not just of each man, but the desperation and commitment which can seed great comedy.  This two-hour one-man show received a standing ovation.

View all posts by Jan →
This entry was posted on 14 September, 2019 in homepage and tagged David Erdos, Jan Woolf. Bookmark the permalink.