SHOUT FROM THE HILLS!

Posted on 21 September, 2019 by Lawrence Freiesleben

– An Extinction Rebellion action in the Cumbrian Lakes

Viewed high from the south, in the clear air and light of the rising sun, the Windermere valley was a long white cauldron of cloud. As we were enveloped, the temperature dropped less than we’d expected. I’d promised my daughter tantalising views of the lake, but beyond the passing trees to our left, all was fog. We emerged at Bowness, pausing on the empty steamer quay to post some letters into a pillar box. 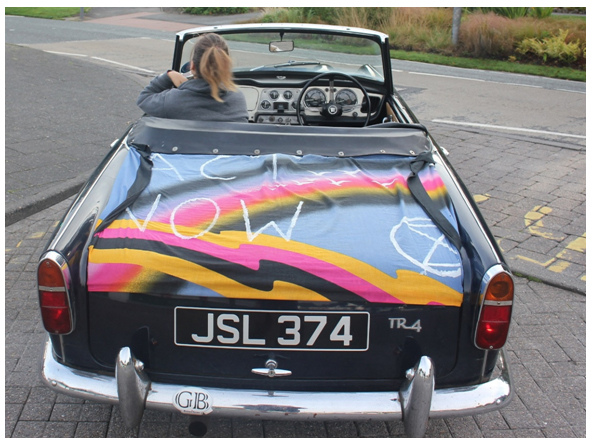 By the time we were passing the quay at Ambleside soon after 8 o’clock, the cloud had all evaporated and traffic was building up. From there, we seemed to be in a convoy, enjoying the idea that all the cars behind us were following the XR symbol – which, like a sand-timer in which all the sand has run out, was brandished across our boot. The truth is, that every Saturday morning with a fine forecast in late summer, is like this: convoys of people looking for escape – and once on foot and above a thousand feet, they are sure to find it.

At the National Trust’s Sticklebarn car park, we met with other XR supporters. Banners or flags could be obtained from the main organiser of the event, Ted Carefoot – who suggested we split into two main groups heading up the Langdale Pikes to the north or Crinkle Crags to the west. Each group would have a drone pilot nearby and working with them.

Though warm and sunny by the Great Langdale Beck, we were warned of winds of over 40 m.p.h. on the ridges and summits, and fast-moving cloud areas were already obvious. Although my daughter and I are used to fell walking and scrambling, the Langdale area was new to us, so the choice of direction was difficult. But since we both liked the sound of “the Crinkle” (as some had referred to it) we set off west. After a mile and a half of flat strolling and easy conversations, our group was soon climbing the gentle ascent of The Band. Sceptics might say, “So what’s the use of a day out with flags and banners to places no-one can see?” Obviously, such an event is supposed to be enjoyable, yet the organisers were fully aware of the potential publicity. Famed around the world for their natural beauty, the Lakes are unfailingly photogenic. As with countless other regional XR events, Shout from the Hills is complementary to the disruption in cities – a disruption that will become more serious until the government is forced to act. “It’s too late already,” many others say, and that might be true, these fears have been around since I was a teenager in the 70s. For more than 40 years, we haven’t done enough! Things must change quickly before we have no options left. Climate emergency needs to become not just a household word, but a household action. Before this report appears, we will all have experienced the beginning of the week of Global Climate Strikes (September 20-27th) with school children and young people around the world rightfully demanding that they have some world left to inherit.

At various points we stopped for the drone to observe or buzz over us, hovering and occasionally flicking to a different position like a huge, wary dragonfly. I’d never seen one before, and was amazed at how unaffected it was by the increasingly powerful wind – whose gusts were almost strong enough to blow us off our feet. The banners and flags were hard to contain, and everyone was being very careful that nothing escaped to litter the magnificence of this high rocky kingdom. Soon we were in the clouds and people joked about the possible negative connotations of this. The trail went on, up past small tarns violently ruffled by the wind. All sense of distance and height were lost, but no one remained more enthusiastic than drone pilot James, determined that we would get the perfect atmospheric shot. 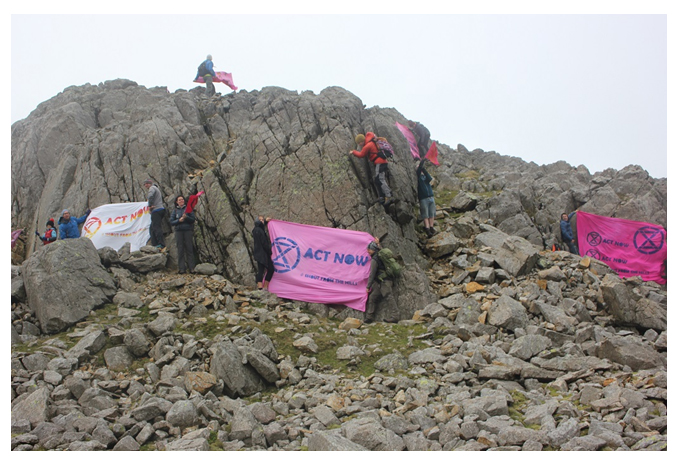 Poor visibility can sometimes be useful for those like myself with a tendency to vertigo, but it can also be dangerous. Luckily, we had good navigators in our midst and my forty year old map was never required. 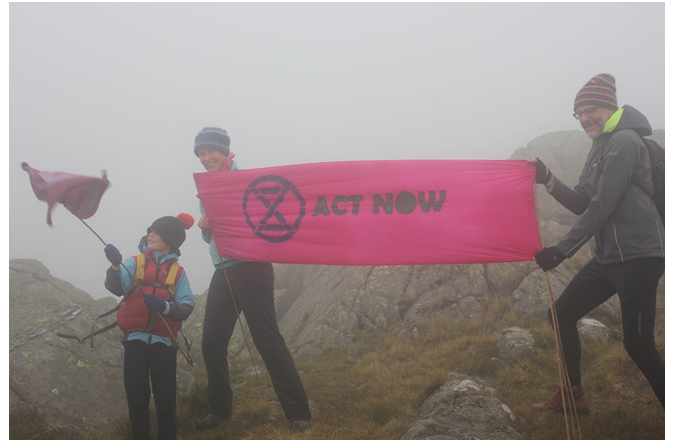 The youngest member of our group Will, aged 8, joined in keenly as visibility declined to about 20 feet. Pausing to photograph an isolated tarn, I would have lost site of the proceeding file ahead but for the last disappearing pink flag. Suddenly, on the descent, a rift opened in the clouds and I thought of Frank Capra’s wonderful 1937 film, based on James Hilton’s 1933 novel, Lost Horizon[i], featuring the paradise or dream of Shangri-La[ii], after which thousands of suburban houses and bungalows are named – as so memorably[iii] satirised by Ray Davies on the Kinks album of 1969[iv]. How much time is left to “put on our slippers and sit by the fire”?

Seeing land so far below, was breathtaking – as if we’d achieved the elevation by conversation and magic. The coldness of our fast lunch in the mist was instantly forgotten. 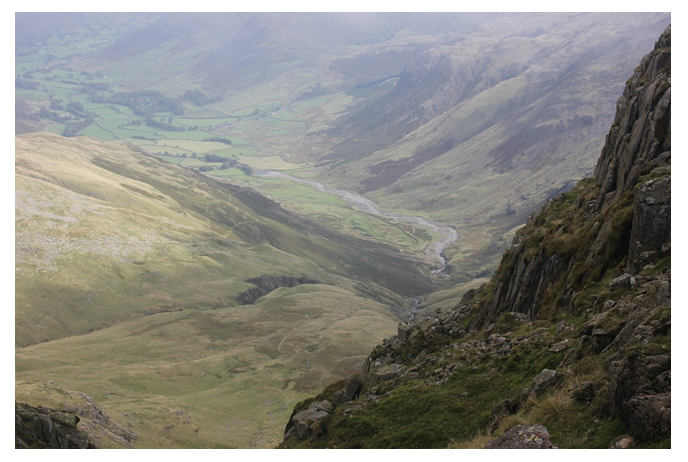 Although the cloud soon closed in again, as we reached lower ground beyond Shelter Crags, the lost valley distance was again revealed, and this time stayed open to sight. On The Band above Oxendale, with Pike of Blisco glittering opposite, it was warm and sunny. Jumpers and coats could return to our bags.

Back at Sticklebarn, members of the group who climbed to the north, had already been interviewed by ITV news[v]. All of them stressed that the minor efforts being made by governments and councils at present, is no more than tinkering. 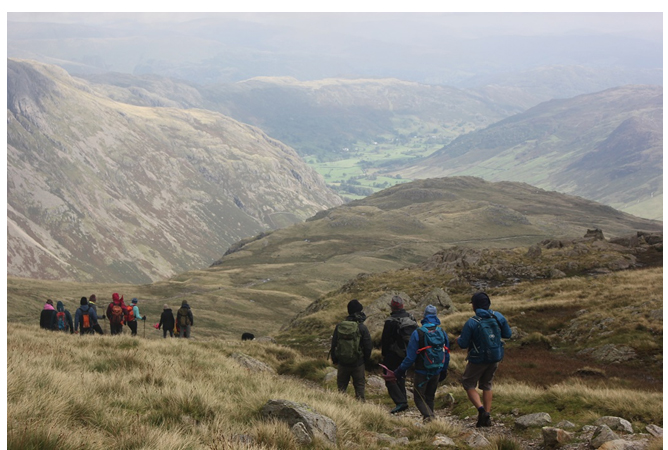 As with every XR action, disruptive or peaceful, new members join us. What felt like a hugely enjoyable hike had a deadly serious purpose.

[iv] Arthur (Or the Decline and Fall of the British Empire). https://en.wikipedia.org/wiki/Arthur_(Or_the_Decline_and_Fall_of_the_British_Empire)

View all posts by →
This entry was posted on 21 September, 2019 in homepage and tagged Lawrence Freiesleben. Bookmark the permalink.

One Response to SHOUT FROM THE HILLS!