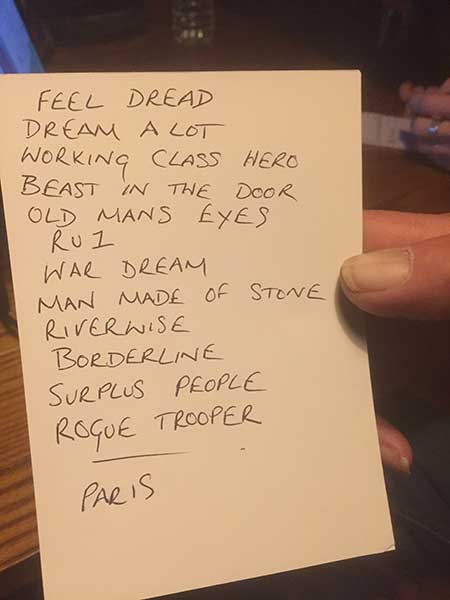 RDF claim the stage in the bar of Hackney Empire, London

Colouring night, these musicians are alarming the air with attack,

To reconstitute what life lacks. His singular vision is smeared

Across the new album they herald; Daydream Dystopia blazing

While the young and trendy just preen.

As each groove scars and troubles

Society’s self regard and false dream.

Murph’s guitar like a jacknife, slicing the air and song beat,

Upturning earth as it passes, these feelings of fear stoke hearts’ heat.

Dream a Lot poems it, as Steve Cruickshank power drums,

And the curative found in verse.

Working Class Hero storms in, angrier even than Lennon

Whose stark condemnation is in this faction’s view even worse.

The appeal from the streets and clashing guitar

Makes words hammer, aping the drum track that dances and arcs on its own,

In these expert hands comes the hymn of dance

Fed by protest as a near ambient echo

Halters and haunts every step spent on the small floor

With a passion impelled afterglow.

Dan Foster’s bass underpinning like a river and pulse through the wound.

Notes shimmer like gold as in the lyric’s lost treasure,

The reverberation of spirit darkened and dealt all too soon.

Here in Hackney, the new form of Radical Dance has been fashioned

As Old Man’s Eyes crashes in Bowsher calls for both the Pope and Prince Phillip; 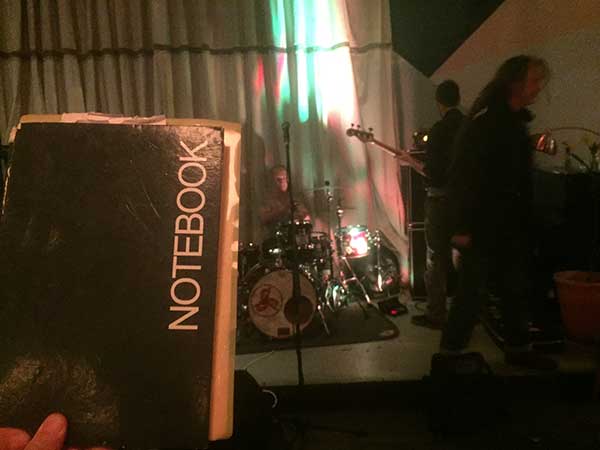 He’s calling them to task in a moment and he wants repaid all that’s owed.

Here is the Eastern twinge uniting East and South London

To find new directions to Babylon straight from Deptford

As attendant trees wither and accusation’s leaves pierce and fall.

RU1 reggaes through. Chris’s dreads like song tendrils, linking him

Back to Marley; maybe this time protest sparks,

Murph’s near arabic guitar break entrances, snake charming us back

Into dark. War Dream powers us. Its call for change is an anthem.

Cruickshank’s drums, like throats rattled at the chance of change and the taste

Of victory sensed even as the groove settles. Foster’s sway gracing fingers

What the Man Made of Stone’s poison line corrupts the bar’s star spiked lager,

The dance reveals swagger as it lurches and fills the hot space,

Here is the punkish protest evolved in a Youth fed arrangement,

Bowsher’s word wound warnings spiralling out and across his charged face.

From the album carves and reshapes wisdom’s thoughts

Paris concludes the album and gig

In the empire location and the kingdoms we create

In our head. Here is a band and a view that made in age

That those who can’t think are the dead.

We let the privileged bury us and thus allow our removal.

The Radical Dance is survival.

And the faction we have can’t be blessed.

To a new form and movement and a fresh way for time to repent.

View all posts by David →
This entry was posted on 30 March, 2019 in homepage and tagged Chris Bowsher, David Erdos, EMPIRES OF MIND, Radical Dance Faction pla. Bookmark the permalink.