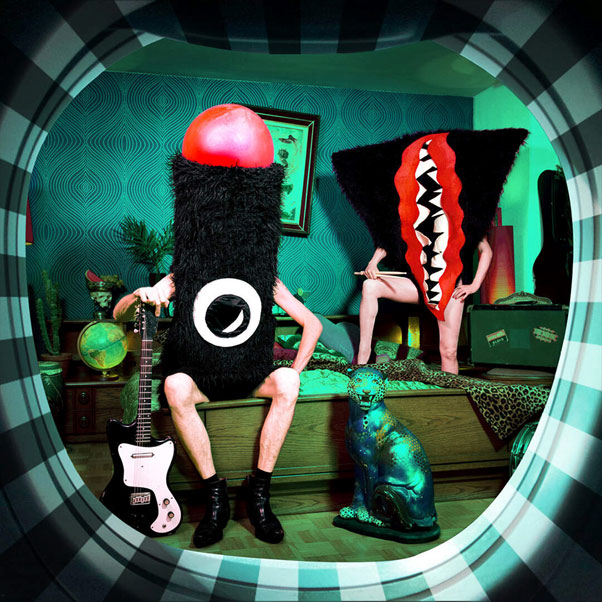 Alan Dearling meets your new favourite ‘Sex Organs’ from the Netherlands and Switzerland. And exchanges words and experiences around music, performance, art, protest, squats and more… Come and join us!

About The Sex Organs:

“The Sex Organs formed in 2014 and instantly became a cult act playing all over Europe at the best Garage Festivals and Clubs causing a wave of rock ‘n’ roll “sexcitement” – right when it was needed! The Sex Organs are more than music, they are a movement! Unforgettable is their demonstration in Benidorm, where they protested for more Orgasms.  If everything is about sex and stimuli in this world, then do it right! They also played in established museums, film and comic festivals and were (proudly) banned from Castle Dracula in Transylvania because of their pubic  hair (true story)! Being the Sex Organs might be challenging but never boring!”

Alan: Great to catch up with you guys and find out about your lives as Two Lively ‘Sex Organs’. Tell me how you got started and what is your mission? 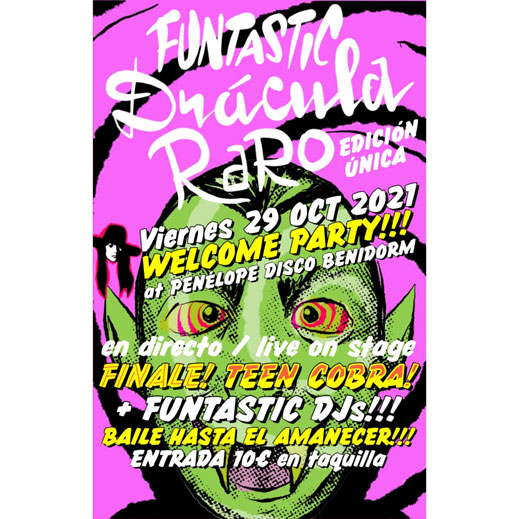 Bone/Jackie: It started with a silly idea and a show booked at the best Rock n’ Roll festival in the world: Funtastic Dracula Carnival in Benidorm Spain. We created the costumes and music in a couple of weeks and after the first show we never stopped playing and we were booked everywhere. Our mission is to make Sex and Rock&Roll fun again!

Alan: Your ‘Orgasms’ video from Benidorm is just fabulous. You must have had a lot of fun making it and performing there. Tell me how it came about? ‘Orgasms’ in Benidorm: https://www.youtube.com/watch?v=jp5qZ_nKCSE

Bone/Jackie: The Sex Organs sing about things that matter to them. The song ‘Orgasms’ is a protest song for more Orgasms. So we organised a critical mass to protest for more orgasms during the Funtastic Dracula carnival which became part of our video clip. The rest of the day we tried to get stimulated by everything that the very entertaining city of Benidorm has to offer.

Alan: I used to run youth clubs and gigs in London in the 1970s during the time of punk and reggae. Your music reminds me of the Cramps, the Slits, Ramones and more…are they among your influences?

Bone/Jackie: Totally! We would say 60s‘ garagepunk and punkrock are the main influences but we also love surf, rhythm and blues, rockabilly, soul,etc….. Band wise we obviously cover a song from the Gories which is one of our favourite bands, and we are indeed very big fans of the Cramps and also bands like the Mummies!!! But yeah there’s so much great music out there…

Alan: I saw both Devo and the Residents in those days. They were ‘art’ bands…lots of strange costumes, head coverings…in fact they put on ‘performances’. Is that a tradition that you see yourselves as being part of?

Bone/Jackie: Yes, to us the performance and playing live is as essential as the music itself. A live show has to be exciting, authentic and fun not only for the audience but also for us as a band. To us Rock&roll is an art form, it’s a way to live and express yourself. It’s about continuing and contributing something original to an existing and timeless DIY culture and movement. We are not only  musicians. Bone is a DJ, a promoter, a comic artist, performer and Jackie is a filmmaker, performer, costume designer, story-teller, visual artist and more. We like to integrate all these disciplines into our band. 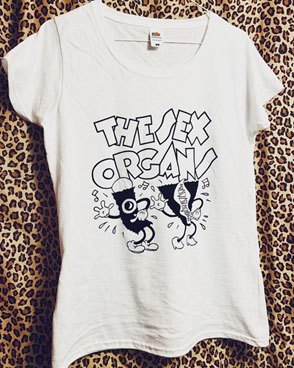 Alan: How did you guys meet up?

Bone/Jackie: At a concert in Switzerland. Bone played with his band The Anomalys when he broke a string that Jackie instantly replaced. They afterwards had a silly dance contest. The rest is history….

Alan: I first spent time in Amsterdam around 1967. I met with members of the Provos (the Provocateurs) – who were art-squat-protesters… And I still regularly join with the likes of Hans Plomp and Aja Waalwijk at Ruigoord, and in various squat sites like at ADM. We are part of the Free Cultural Spaces loose-knit symposium group around the world. That links places like Ruigoord with Christiania in Copenhagen, Uzupis in Vilnius and the more ‘alternative’ festies such as Boom in Portugal and OZORA in Hungary. I think that we have probably overlapped in these spaces…and you seem quite closely associated with the anarchist scene…

Bone: Yes I remember the very last of the ‘big’ Ruigoord festivals in the early nineties. That was probably my first and I have been visiting many times since. Also I’m very closely related to the ADM and their festivals like Robodock and the Alternative Circus festival that they did for many years amongst organising my own Sleazefest there. I’ve been squatting buildings and traveller sites for nearly 25 years in Amsterdam. Jackie grew up in the squat scene of Zurich living in the Wohlgroth and these days we have a good connection to the Reitschule in Bern which is one of the oldest and biggest cultural squats in Switzerland. 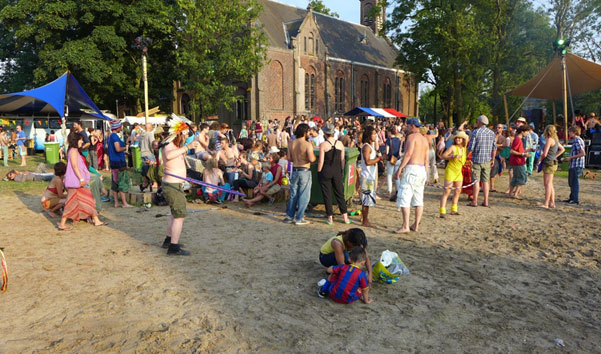 Bone/Jackie: Hahaha, yeah that’s what we thought. Our idea was to make a ‘The Spits’ style punk song as interpreted by Sex Organs. What would they be most against!?! Obviously Underpants! And during lockdown we were crazy enough to spend two months making a stop motion animation movie on our own! To complement that bold statement.

Alan: You seem to be like a deranged, more punked-up cartoon version of the White Stripes. Does that make any sense?

Bone/Jackie: Not really. We have bigger balls and more hair.

I spotted this video of you guys live performing the ‘Cameltoe Twist’. Was this around the time when you were banned from the Transylvania punk party – what’s that story?

Bone/Jackie: We were invited to play at a rock n roll Festival called ‘Trashylvania’ that was taking place in castle Bran in Romania/Transylvania. Three days before the show the manager of the castle found out about the Sex Organs and said that we are not allowed to play with these outfits in ‘his’ castle despite the fact that it was a 100% private party and he got a lot of money for it. It would sully the Romanian history he said and the promoter had forgotten to pay the rent upfront. So, he threatened to cancel the whole event and so we couldn’t play which was a huge drag but it makes for a hilarious story ever since.

Alan: You’ve released a number of singles, starting with the debut, ‘Fuck the Human Race’ in 2014 and in January 2017, you released your first full length album, ‘Intergalactic Sex Tourists’. Have they sold pretty well? Have you played a lot of gigs and festies around the world? 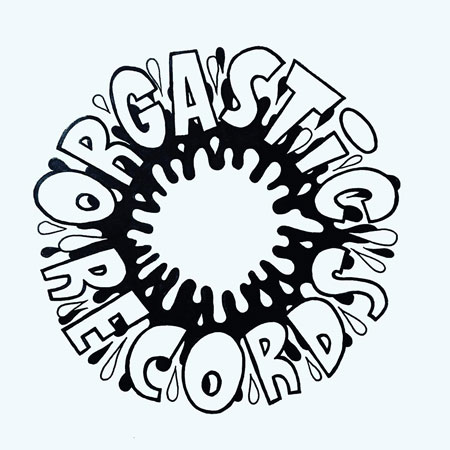 Bone/Jackie: As soon as we are allowed we will go for world domination again of course! Also we’re involved with an organisation against circumcision where we plan to run some rallies with. And of course churn out new records and crazy merchandise.

Alan: What’s the alternative music/arts/squat scene like in The Netherlands? Is that your full-time base?

Bone/Jackie: Bone lives in Amsterdam and Jackie in Bern so we have both places as our base. The scene in Amsterdam always used to be pretty healthy but of course due to pandemics and gentrification it gets harder and harder to do our thing. But then again we will find a way…

Alan: What new bands/artists should we be looking out for in the near future? I’m quite excited by the potential of Wet Leg… Alan: Really hope that we can meet up again and I can see you playing live, maybe in Todmorden at the Golden Lion, or otherwise around Amsterdam…thanks for your time… Luv ‘n Respect

Bone/Jackie: Thanx a lot for interviewing us Alan. We would love to see you and everybody else at one of our future shows so we can all dance around and have a sexy time again!!!

Tweet
This entry was posted on 12 February, 2022 in homepage and tagged Alan Dearling. Bookmark the permalink.