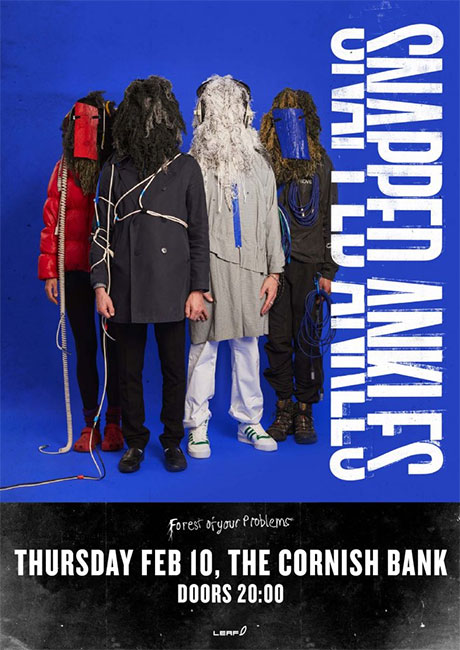 If you were down the front of this newly refurbished and recently reopened venue during Snapped Ankles’ set then you were faced with a heaving mass of tranced-out dancers, arms waving, braids flying, big smiles on their faces. A little further back were the rows of middle-aged fans nodding in time to funky indie-rock. Nearer the bar at the back were the curious and undecided, drawn by publicity which mentioned postpunk and psychedelic music.

Snapped Ankles live have definitely got the funk in a way there their albums don’t always showcase. They have also adopted boiler suits instead of full gilly suits as current stagewear, although they have retained their face coverings. The small stage struggled to contain a drumkit, a table full of effects and keyboards, a bass guitar, mike stand complete with various effects taped to it, and a guitar for occasional use. In fact the lead singer made full use of the whole venue, leaving the stage several times to dance, stalk and walk through the audience. 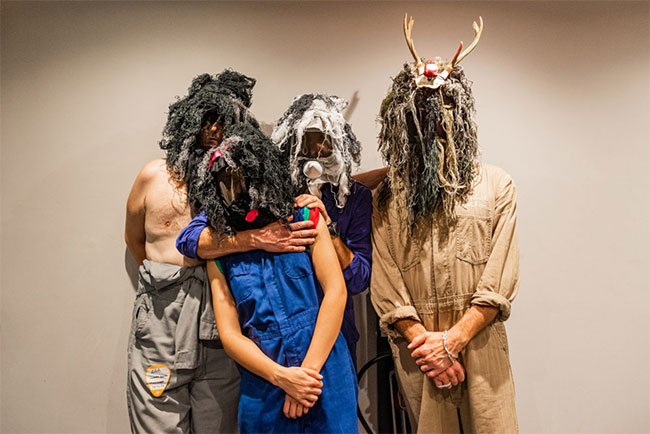 It’s hard to describe their music, which is why the audience were such a varying bunch. There’s drum and sequencer rhythms underpinning it, resonant bouncing bass and then effects, noises, keyboards and vocals layered over the top. The music feels freeform and innovative but also rehearsed and polished: deliberately anarchic and on the edge. Songs melt in to each other, there are percussion breaks, effects breaks, synth breaks and frantic guitar breaks, as well as chanting, but little pause for breath.

The first music I heard by the band was ‘Johnny Guitar Calling Gosta Berlin’, which remains a favourite, so I was delighted that they finished the evening with this track, which induced a mass singalong and more drastic hair- and arm-flailing down the front before we all spilled out into a frosty high street. 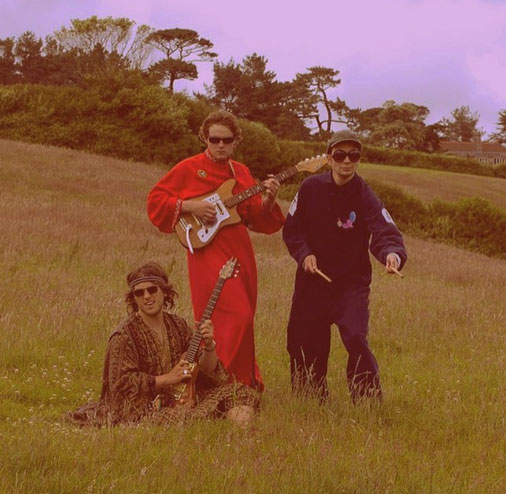 Support was by Klen, self proclaimed freakbeat beatniks of the 4th dimension, who took to the stage in what looked like their grandmothers’ discarded clothes, and produced some spectacular riffing songs, making great use of their twin guitar line-up to duet over the rock-solid drum and bass. If they can learn to think about and face the audience, sort their vocals out and stop dicking about mid-song with arty-farty sub-Captain-Beefheart interludes which grind the songs to a temporary halt, they will be even better. As it is they come across as an art-school band who have been listening to too much Hawkwind and Loop.

Snapped Ankles – Rhythm Is Our Business

View all posts by Rupert →
This entry was posted on 12 February, 2022 in homepage and tagged Falmouth, Klen, Rupert Loydell, Snapped Ankles, The Cornish Bank, White Spines. Bookmark the permalink.

One Response to Rhythmic Persuasion