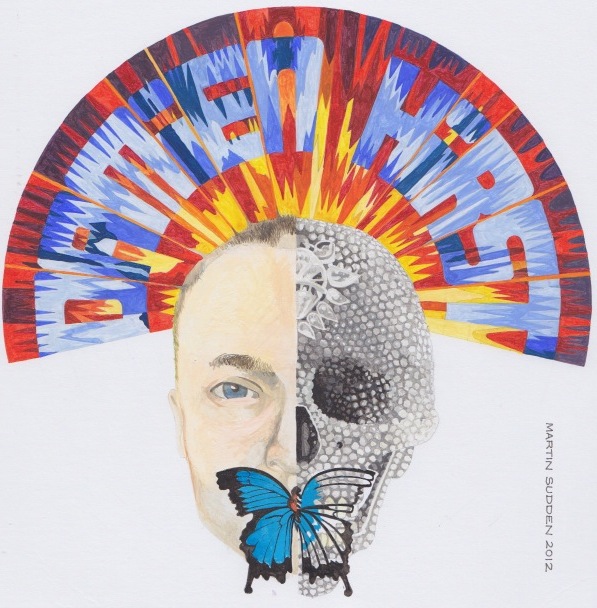 “He liked paintings that his guests did not know how to look at.”
Don Delillo, Cosmopolis

We’ve seen this type before, claiming
the Universe has his private number,
calling him up at any hour, something else
putting those creepy ideas in his head.
Perhaps that’s why his efforts
have the whiff of botched miracles
and half-practiced party tricks,
Jaws in a Box, hunger’s trajectory
caught in glass and sold down the river,
a miserable, soul eating ghost
rendered to coffee table novelty,
as cute as a scorpion drowned in Lucite.

From the Virgin to Vanitas to Verity,
he has the knack of giving art’s perpetual themes
the tacky, replica look you’d find in Vegas
and in a more existential mood,
numinously confronts our mortal illusions
with his fly breeding bestiary, vivisected giant dolls
or a momento cupido,
Death not triumphant but abstracted by hype
and blistered in bling, the crystal pustules
of human misery,
a customary garnish of tyrants
and media sluts.

Cut from the same clown-suit cloth
as Joe Messiahs, madcap artists
are the stuff of fable, tribal lore, mawkish hymns,
rabid scripture and other tragic clichés
of payback time; for storming Olympus,
stealing fire, the chariot, mother’s credit card;
formulaic operas of retribution,
with pratfalls all the way to rehab
and pretentious arty cant that is
the gift of the Gods’ to tabloids.

Then it’s fraud, conman, hoaxster thief,
the jeers of the squares, fogies and philistines;
all those schmucks that can’t see the joke.
Down the Groucho, it’s a round for the house
and the artist keeps having the last laugh;
more Michael Jackson than Modigliani,
an idea-jacking, joyless rider, who gets no kicks
and cuts no trail, a toy-town Steptoe
whose muse keeps coming up short,
spinning action altarpieces for Burger King
that conjure no dreamy universes like One, 1950
or a bunko show, death camp for butterflies,
to flog butterfly print deckchairs, butterfly teapots
and pots of butterfly marmalade
to the culturati carriage trade.

The artist’s virtual junk stall is open all hours
so the fabulously rich can find art’s relief
from ennui and the furious itch of wealth
that has learned to virally reproduce.
Surely, this much money must know what it is doing?
It clearly did in Venice, where capitalism was born;
and conspicuous consumption
demanded Bellinis and Titians.
Now it’s beguiled by splodges and spots and gauds
Nothing that’s difficult  anymore
like art’s real dirty work,
the most gruelling atavistic forensics
or wiping narcissism’s smirk
with a sheet of flame.

David Sylvester – “At what age did you realise that death was going to happen to you too?”
Francis Bacon – “I realised when I was seventeen…I remember looking at a dog-shit on the pavement and I suddenly realised, there it is…this is what life is like.”
Tweet
This entry was posted on 3 April, 2013 in homepage and tagged Et in Bohemia Ego, Jay Jeff Jones, Martin Sudden, Modigliani. Bookmark the permalink.