Everyone Loves A Time Machine 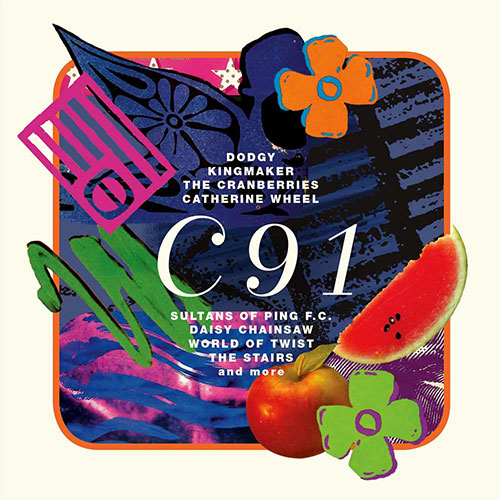 Everyone loves a time machine, and pop’s predilection for recycling its own past and capitalising on nostalgia has long been hard-wired. Just part of the deal. The pleasure and the pain. After all, there is nothing quite so magically exciting as being reminded of past glories by a Pop song. Nothing quite so painful as the memories of miseries conjured by another. And there’s the rub of compilation series like Cherry Red’s continuing ‘C(insert year here)’. Because for all the musical gems that emerge gleaming from the murk of clouded nostalgia there are those monstrosities that one rather hoped might remain consigned to the trash. I mean, surely no-one really wants to be reminded of Neds Atomic Dustbin?

All that said of course, what about those from Younger Generations whose approach to these collections must be one of an at least vague fascination with What Went Before and a desire to join some dots in Pop’s great lineage? After all, the music collected on this 3CD set of tracks from 1991 is further in the past to us now than the contents of, say, those Bam Caruso collections of obscure psychedelia were to ‘us’ at the time. So yeah, time, history, nostalgia. All malleable energies to feed the soul in desperate times. Or somethin’.

So 1991, huh? Well, Lois Wilson does a fine job of contextualising the year in terms of a rapid-fire overview of its social and political history, and the snapshots of each release give as much detail as one might possibly need. Listeners will doubtless want to follow some threads and dig deeper or, perhaps more likely, glaze over and erase even this minimal knowledge from memory. Okay, okay, that’s personal bias kicking in again, but whatchagonnado?

Now speaking of personal experience, let me tell you that a significant proportion of my own 1991 was spent in the outskirts of Reading as a skint trainee teacher, so most of the records I picked up were in the reduced racks of the local stores. It was a great time for cheap 7″ singles though, and you could grab a bunch of DeConstruction label cast-offs for the price of a pasty. It’s a shame more of those haven’t made it here, although they would likely be deemed just the wrong side of the ‘Indie’/’dance’ crossover point, which is fair enough. I do think, however, that the astonishing ‘Rollercoaster’ by Ariel would have fitted perfectly next to the likes of Saint Etienne, World of Twist and Paris Angels. But anyway, by 1991 wasn’t the whole Indie-dance thing starting to fizzle out and morph/mature into different styles? Saint Etienne were perfecting their pop confectionary and the Dusty Springfield sampling ‘Nothing Can Stop Us’ remains one of the most glorious pop singles ever, and oddly prophetic in hindsight as Saint Etienne would be one of the few groups on ‘C91’ who would go onto a long and storied career. Certainly you would not have put money on them at the time, especially as their take on Pop seemed hard-wired to glorious auto-extinction. You wouldn’t have bet on Manic Street Preachers either, whose first major label single ‘Stay Beautiful’ is included here. Of course 1991 also saw the Manic’s ‘Feminine Is Beautiful’ 7″ on Bob Stanley’s CAFF label, so there are nice connections there if you care to see them. You probably would not have bet on The Cranberries at the time either, and although ‘Them’ from the ‘Uncertain’ EP still sounds a little gorgeously pained, there’s nothing to suggest their future fame.

Digging amongst the roots of artists who would become lastingly productive is seldom the true appeal of collections like C91 however, as Pop-archaeologists enjoy nothing better than unearthing the perfect one-offs and the great unknowns. Yet whilst I am perfectly willing to accept that my views on this are inevitably biased, I’m not sure there are many (or indeed any) such delights on these three CDs. Certainly there is nothing I remember hearing and dismissing at the time whose quality thirty years of forgetting has improved. I mean, I’m still gonna pass on the likes of Spitfire, Steamkings and Raintree County, thankyouverymuch. And as for the whole ‘shoegaze’ thing, well, I gotta say these tracks by Slowdive, Chapterhouse and Catherine Wheel do nothing to convince me of any lasting, or even passing worth. Even the once-loved ‘Jack’ by Moose has lost something of its appeal, although I’m going to suggest that this is largely predicated on the knowledge that within just two years they would go on to make the immeasurably classier ‘Honeybee’ LP, a record that continues to shimmer with gratifying beauty. Of course there are those who will argue that the likes of Slowdive similarly went on to make more mature and better records, and whilst such arguments may be valid, they are equally wrong, Pop being an entirely subjective realm after all.

Subjectively speaking, then, the best tracks on ‘C91’ are certainly still those that meant most at the time. The aforementioned Saint Etienne and the Manics, the criminally under-rated World Of Twist and Paris Angels. Odd though that there is no sign of Intastella, whose ‘Intastella And The Family Of People’ LP and attendant singles were surely highlights of the year, and incidentally let’s take a moment to remember Martin Wright of Intastella and Laugh who sadly passed at the end of 2021. What were we saying about the great unknowns? The Bodines were not quite unknowns, although Medalark Eleven, who they briefly morphed into, certainly ended up being so. ‘Snake’, from a shelved Creation label single, is certainly a highlight of this collection. Elsewhere, well, there is ‘Jet Pilot’ by Spirea X, the act led by ex-Primal Scream founding member Jim Beattie that still sounds better than anything on ‘Screamadelica’ (okay, okay, my tongue is in my cheek there but man, I still think of ‘Screamadelica’ as more a record by Andrew Weatherall and The Orb as by Primal Scream). Tracks by Boo Radleys and Pete Kember’s Spectrum still sound brilliant, whilst the crystalline shiver of Blueboy’s ‘Clearer’ still takes my breath away.

Blueboy are just one of several artists from the Sarah label on ‘C91’ and I’ll admit that this is something of a surprise, for at the time the label and its artists were largely despised by the mainstream music press. It was a ludicrous stance, but in hindsight perhaps no more so than the rabidly fanatical support by those scribbling fanzines (and yes, I count myself amongst the latter). I do seem to recall that by 1991 my interest in many Sarah acts was on the wane though, and I had long-since given up on the habit of picking up every new 7″. And whilst I’m sure there are those who would still stand by a love of the likes of Tramway, Gentle Despite, Secret Shine and The Sweetest Ache, for me listening to those singles again here grates as much as it did at the time. Even Heavenly, whose proto-Riot Grrrl PunkPop I adored so much seem paler in the rearview mirror, although to be honest ‘So Little Deserve’ was always my least favourite of all their singles. Certainly too I would suggest that the more recent work of Heavenly members Amelia Fletcher and Rob Pursey as Catenary Wires is more interesting than grubbing around in the past, whilst their work with folk musician/field recordist Darren Pilcher and poet Nancy Gaffield on the ‘Wealden’ project is one of the most intriguing and captivating things I have heard in recent years.

‘C91’ then is three CDs worth of archaeological discoveries that most could, and perhaps will, edit down to a significantly shorter playlist. That’s just the nature of these things though, and maybe too it’s the ‘reality’ of time travel, confronted as we are by all the rubbish that had been hacked out of our memory systems, desperately searching out the treasure we are convinced lies around us. Yours will be different to mine, and each of us will be as wrong as we are right. Now, what about 1992?

Tweet
This entry was posted on 15 January, 2022 in homepage and tagged Alistair Fitchett, Cherry Red Records. Bookmark the permalink.