NO MAN’S LAND (BURN THE MOVIE I USED TO KNOW) 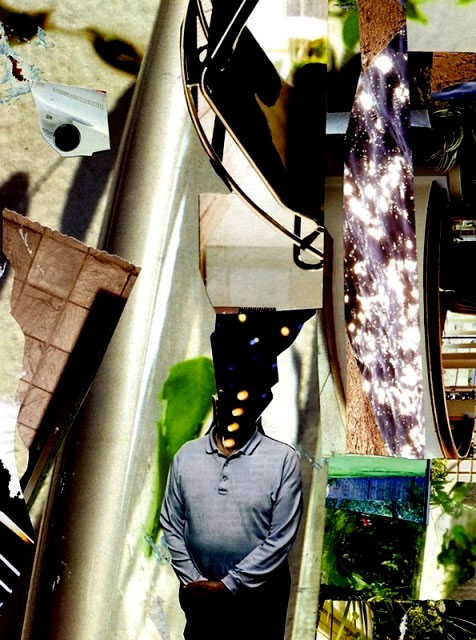 I: A CODED MESSAGE

The background noise exemplifies a coded mystery message. One thru Four or more.

No good: lunchtime walks away with my afternoon bonanza. Ridiculous! That guy looks mean and a killer if ever I saw one. Don’t trust him an inch.

Separately mother compass dies like Bye-Bye Blackbird somewhere Off-Broadway. No – give accurate information. He feared a change of mind; change of mind, change of shirt. Get lost. The pilot sold the series called What is Truth? (ten episodes, ten commandments). Get a load and see for yourself. Rotten little fly-by-day-and- night, she’s anyone’s now except no man’s hand can touch her.

Burn the set I used to know. The bloke leans hungrily against a packing case flicking ash from his impeccable turn-ups for the book.

Militarize space? Why ever not? What else can you do with it?

That bastard looks so evil. I’ve seen him in other B movies, on some other set.

Wipe the recording. Life is so cheap on Mars. Horrible. Space today is largely no man’s land very operatic my friend. Satellite’s gone way up to the read all about it. Go flog it to death. Go sing upon some other star. Shoot out in style, shoot out today. Hundreds of hours in a day. Poor old shuffle of death mortal coil.

Machine intelligence and the three sea eyes of the starfish star war level down the ultimate trip through another stargate to another room looks just like Hollywood to me dearie. It’s the poetry of abstract space, that’s what it is,

he explains: get it together. Lead character (mugshot available) spends his weekends down on the towpath watching out for lame ducks. He uses chloroform and a copy of H P Lovecraft – memorizes the scripts, shoots it in high contrast dimensions of

Decode that mysterious One thru Four or even Five message thing whatever.

What a name for group. Mutual attraction Why ever not – the pilot died for truth. Meanwhile, in another part of the Forest of Dawn they are all out on the prowl. He knows they read about him in the papers. Young Random showed up early, hurled his briefcase into a filing cabinet, poured himself a Scotch on the Rocks, took off his shirt and settled down to read Shoot Out Hollywood Style, another Babylon type expose binge amid huge concern. Then in walks young You Know Who and CLICK CLICK as fast as that ruins your whole day.

V: LIVE AN ABNORMAL LIFE LIKE THE MAN UPSTAIRS

Obsessive training makes me incapable of laughter or indeed even living an abnormal life like the man upstairs. Wrongly conclude the fellow is a crippled supercomputer. Out of the filing cabinet in young Random’s office another Indian rope trick. What language do you expect Him to use?

Some simulator. Look lost, look cool, walk off the set.

Gather ye rosebuds my old buddy. Back in your box. Punch out the message: Gather ye rosebuds, beware of the parquet flooring. The new director money that dreams never bought avid for those dollars in drag. Knife for all. He explains: to find a Russian strike (or scratch) a Liberal. He means Commie. Holy Mother hide those commandments. Howzat!

VII: IN THE SCHOOLYARD

Play it down, play it down and keep your distance.

Walk off stage right. Midnight specials panic in four-leaf cloverland. Lights, camera, action! All that stuff, you know what we mean. Coping with this new director just gives me the migraines darling. Back in the schoolyard it’s all go. All Blitz. Young Wassisname flies into Alphaville looking too, too New Wave-ish and for all the world like he’s seen your ghost dancing on the grave of space. It’s all cathedrals in Spain or pie in the sky. Deliberately withholding information, rhetorical questions.

What language do you expect to use?

Grand Maestro, Cut up the rave reviews, burn the movie I used to know. Bye bye. Memorise the script, if you’re caught eat it, shoot young Random and think of England.

The invisible shield a magnetic dying ember of Paris, 1918. No use to us, my boy. Poison ye rosebuds. While uniformed police escape the uninformed priests watch the supercomputer thrill to the sound of the body language you expect to use in the search for truth in the pilot’s office today.

Responding to pleasure with a slight curl of my upper lip, we seem to be coming over the hill in an ecstatic drive for the last dimension. Don’t trust it an inch. Cut.

Tweet
This entry was posted on 15 January, 2022 in homepage and tagged A.C.Evans. Bookmark the permalink.