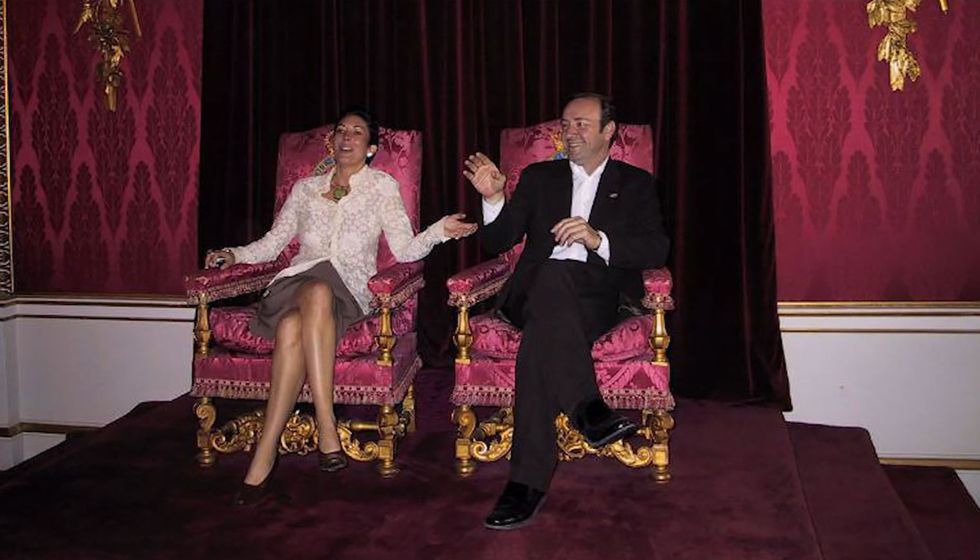 Society is a cake left out in the rain. The song says it.
But Jimmy Webb’s Macarthur Park has been muddied
As life’s lost loving gift becomes sift. And also swill,
As the cream that rose to the top quickly curdles,
And the sour taste of one cumming is washed down
By a spurt of Maxwell House, as it crumbles.
As the ensuing shit stains saliva the full force
And flavour is akin to Eden’s snake’s hiss and lick.
Ghislaine, that former girl of false gold, scion
Of her failed, false God father has been revealed
As more gruesome than Epstein, perhaps, as his pimp
And parent to ghosts that will continue to haunt
Their joint victims, who endured his penetration,
While her domination tongued, teased and tickled
In her near fevered need to find gimps. Now, she is
Kept awake in her cell, Guantanomo like, close
To torture. We could call this deserved. Harsh to say it.
But then, inhuman acts make strange plays, in which
Wretched behaviour is wrought, as well as reared
Within Justice. But then, we have to ask, what is justice
When the corrupt can continue to restage or chart
Fouled forays? How do we quantify crimes, when former
Prime Ministers ghost write books to squat on high
And squeeze Memoirs; extracting from the crap
They cast on us, the kind of filth and lies that corrupt –
Not only language itself, but life as we are all led to live it –
Until, that is, we take action on what we condemn
And disrupt, chiefly the unnatural order soon set. And so,
We seek revolution: one in the mind, not on pavements,
As true collective will starts to bake not only Jimmy Webb’s
Metaphorical cake, but the form of heat that can’t
Harm us. Call me naieve, but re-writing in either poem
Or, play may construct not the Utopias we once sought
As we can’t have them any longer, but, rather, the kind
Of Shangri-La we’ve all searched for, which is where
The mountainside meets the cloud in complete parity
And we can seek what we can achieve pushed together.
Even if sadly, today, competition, sourced through every
Separate shout remains loud. Pete Townshend said this, too,
Recently: soon each repopulated stage will be crowded,
Each voice fighting to be heard, with each drum break,
A desperate battering down of the door. Under the illusion
Of joy, and of restrained release hope’s remastered,
And perhaps, taste gets taken and discernment, too,
As ice thaws and forms a river that runs and drowns
The land, lease and garden, in an attempt to dilute,
Or, douse poison, mightier than the rose, thorn,
Or, sword. To sever the wound where its won,
Even if this means amputation, so that the new blood’s
Flow will be fluid and able in time to cleanse floors.
Then we’ll be free of the sickness that stems from those
Who pose at high tables, dispensing scraps none can savour
From a menu that few could either concoct, or defend.
Evil’s ingredients spill and stain the plate passed
Amongst us. With Maxwell and Chauvin on simmer,
And Cummings and Johnson boiled over, how much more
Can we swallow until – screw pandemic – a starvation
Of souls stirs our end?
David Erdos 28/4/21
.
.
Tweet

View all posts by David →
This entry was posted on 1 May, 2021 in homepage. Bookmark the permalink.