Something Beginning with C 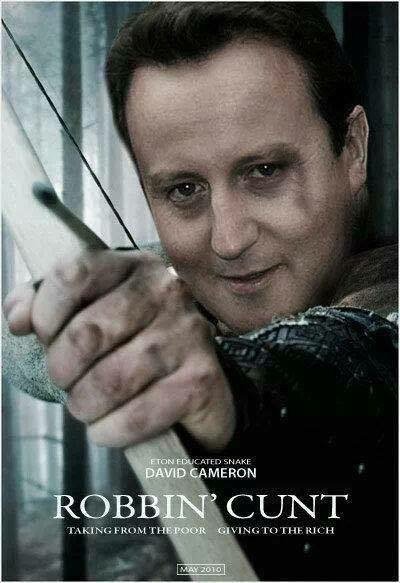 (David) Cameron’s cheeks cocoon care,
Cure and chaos. Not on a grand scale,
I grant you, but as another example of that
Which should wake us all up, and return
The cityscape to the feudal, and the counties
Beyond to the country that early legends
And lines first begat.  King Arthur’s sword
In his stone is a world away from the rock Dave
Crawled under.  And blow as he might through
Those white cheeks, a heated torrent of air
Gushes forth. It is as if Political office were not
Even a place where the half hearted performing
Of duties were practised, but is instead
A rehearsal room (or shed) for bad actors
To blithely record false applause.
Besides, everyone knows what he is.
Something beginning with C: craven? Coward?
Or any other word you can think of. Some say Crook,
Christian. But why would anyone of faith act this way,
As the rest of us are pushed to Golgothas,
Where crucified in our houses, this type of human
Act’s alien- certainly to the creeds of said Faith,
With either his hand on the tests, or, on the costs
Of that sent to test us, as his hobbling morals lobby
In the hallways of power’s pale Labyrinth,
To extricate money from pain, and profit no doubt
From false prophets, who have catergorised
Where we’re heading as possibly Nostradamic,
Or, perhaps a place where contrition, as opposed
To a gallows pole needs a plinth. And yet, he’s not even
The problem, is he? He’s no more than the cough
That congests us. In clearing the throat, this cheeky
Blair copy is just filing the phlegm we’ve all spat.
And yet his flailing powers nevertheless define permanence
As we currently understand it, as having no integrity to it,
And in his raising the price hope falls flat. He’s just another
Contagion, that’s all, in a currency of contagion.
The viral sui generis is virus and there is something abroad
We all catch; something gnomic within our genome,
Which mars Man and unmakes him. And woman, too,
A la Priti; that such monsters still preen lights the match
That can still dare the dark even as it grows all the greater.
Cameron, Covid, chaos. Now, con and country, too.
Each attacks.
David Erdos April 28th 2021
.
Tweet

View all posts by David →
This entry was posted on 1 May, 2021 in homepage and tagged David cameron, David Erdos. Bookmark the permalink.