Posted on 19 February, 2022 by Andrew Darlington 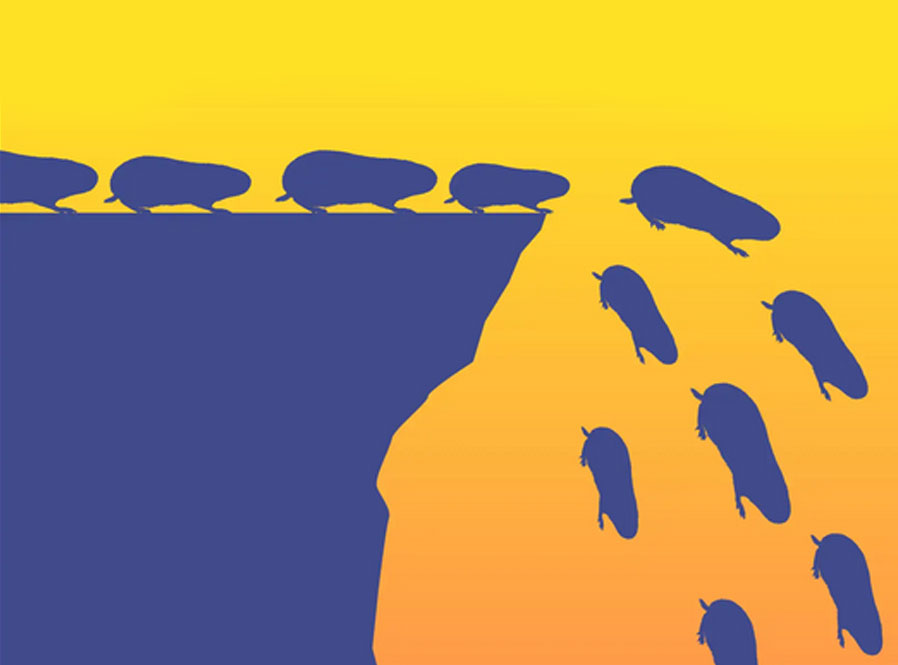 It begins with a hundred leapers.

Monitoring mangled beach bodies in sharp dizzying perspectives afterwards, it gets voice-overed as a cult suicide pact. Nothing more than religious cranks ravenous for eternity.

A month later it’s a thousand leapers. Drones show their shuffling dead-eye gait. ‘Live reruns of the refugee columns from the Islamabad tsunami’ they commentate. ‘Or the tribal gathering of Woodstock blocking off freeways’ they goggle.

A solid wall of a million leapers ripple out from megacities across perimeter barriers towards the cliff precipice, copters flood illumination, cops and military are overwhelmed in pressed swaying bodies. Thoughts rage red and runny.

The seas silt with the dead. Flotillas of corpses, gnawed and devoured, seeding the deeps…

In Madagascar ringtail lemurs fear overhead shadows, yet there’s no winged predator large enough to prey on them. Their impulse is hung over from extinct eagles that once sculled the skies, evolved in a different age, in an altered time…

Colonies of rats confined in overcrowded cages rip each other to pieces in a frenzy of cannibalism until an endurable level of personal space is restored.

They theorize. In emptying global cities, where sunlit specks corkscrew into urban gravity-wells, impressions hang in the false spaces between arcades and malls. We are primates. The supernormal stimuli is population compression. Phrases diffuse the light into a locus of familiarity. The trigger is evolutionary. Mass migrations that end in suicidal cliff-top plunges accelerate.

Until populations stabilize, at a sustainable just-below pre-industrial level.

In the dwindle of days the pain becomes silence, and silence settles into the bone.

View all posts by Andrew →
This entry was posted on 19 February, 2022 in homepage and tagged Andrew Darlington. Bookmark the permalink.