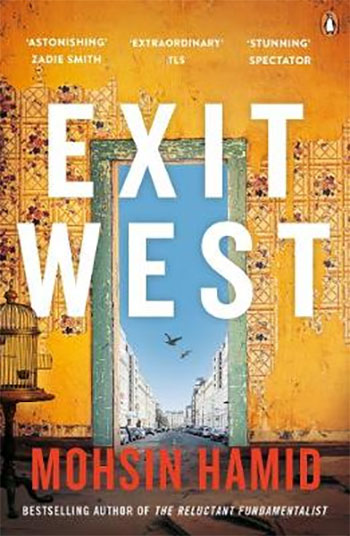 I picked this up in the local bookshop as it looked intriguing, despite it being plastered with ‘Sunday Times Bestseller’ and ‘Shortlisted for the Man Booker 2017’, which normally indicates that stuff’s a bit mainstream and obvious for my taste. (Yes, I’m a book snob.) I have to admit, however, that this is the best fiction book I’ve read in a long time.

One of the interesting things about it is the way it sneaks in a fantasy or science fiction element, but does so within a realist setting. In an overcrowded and violent world, very like our own, black doors appear. These open into passageways (portals?) to other places around the globe. Suddenly citizens of all nations are dispersed around the world, often having to start new lives in migrant camps in the place they arrive. This is simply a given part of the plot, written in an almost magic realist way.

The book follows the fortunes of Saeed and Nadia, inhabitants of an Asian city during a violent rebellion, who slowly get to know each other, then fall in love and live together in Saeed’s father’s house. Eventually the revolution becomes too much and they escape to Europe, eventually ending up in a camp on the edge of London. Here they slowly drift apart and find new lives, new partners and a new sense of place and home, especially once a violent anti-immigrant operation is averted.

If this sounds trite or boring, it isn’t. This book cleverly explores different religious faiths, sexualities, ideas of love and family, and how they affect society; as well as themes of what home might mean in a chaotic, financially insecure, restless and mobile world. All of this is done without any info-dumps, preaching or obvious uthorial intervention. Saeed and Nadia’s story holds our attention throughout the book’s 229 pages, all written in a restrained yet forthright narrator’s voice. It’s a subtle, clever book that evidences how we might all learn to live together. I can’t recommend it enough.

Tweet
This entry was posted on 21 February, 2018 in homepage and tagged Exit West by Mohsin Hamid review, Rupert Loydell. Bookmark the permalink.