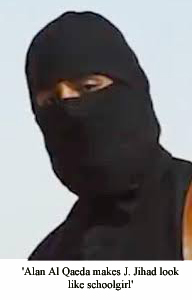 MI5 bosses experiencing a sharp slump in alarm rates over Johnny Jihad have revealed the latest terror threat to the UK and the wider world: Alan Al Qaeda. MI5 raised concerns as to the imagined threat that Mr Jihad posed to the country after Radio 4 broke the record for mentioning the term ‘Jihad’ in one day (Tuesday 3rd March), previously held by CNN in the build up to the U.S. invasion of Iraq in 2003, and UK terror rates did not even reach severe.

Mark Daftbrush, MI5 head of terror development, muttered, ‘Alan Al Qaeda will make Johnny Jihad look like a schoolgirl with pigtails sucking a lollipop and riding a bike with ribbons coming out of the end of the handlebars. Mr Jihad is what we at GCHQ call an absent threat as although he’s got a Mockney accent and sounds like he’s from a sink estate in the Southeast he’s actually thousands of miles away. Well at least that’s what we tell people. Alan Al Qaeda, on the other hand, lives in England where he works as a builder and instead of chopping infidels heads off with a sword he kills them with his nail gun on his lunch break. Well at least that’s what we tell people. This is perfect for our terror plans as now everyone will think they could die at any moment and will call the police every time they see someone in a hi-viz with a beard and some tools. Now I think we can safely say, without any doubt, we will see the end of this unfortunate rise in terror fatigue.’

Co-ordinating their own programming with that of MI5, Radio 4 plan to mention the word Al Qaeda over 20,000 times next Monday, featuring fundamentalist Islamic terrorism in all news items, Woman’s Hour, which will be read in Burkas, and the Shipping Forecast which will be broadcast live from the Straights of Hormuz. Brain of Britain which will be changed to Brain of Bahrain with the contestants made up of radicalised fundamentalist extremists and Just A Minute will feature two bomb disposal teams diffusing a suspicious package left by the contestants of Brain of Bahrain.

Mr Daftbrush was keen to add, ‘UK citizens need not worry about a possible future fall in terror as we have several more seemingly mental Muslims in the counter intelligence pipeline. When Alan Al Qaeda, or ‘You Can Call Me Al Qaeda’ as we like to call him here at the station, stops making everyone shit themselves then we have Tommy Taliban, Harry Hezbollah and Freddy Fundamentalist bearded up and ready to go. Then when we need to get rid of some homegrown terrorists, which is what we at the station like to call YOU, then we have Extremist Eric who is basically anyone who doesn’t believe this total bollocks.’

——————————–.
Ethan Harrison is the republisher of http://illuminatihunter.com/ and has his own blog The Stuffing-it-to-’em Post@Blogspot.com
Tweet

View all posts by Ethan →
This entry was posted on 5 March, 2015 in homepage and tagged Ethan Harrison, satire, spoof news. Bookmark the permalink.