Posted on 7 November, 2013 by DaveTomlin 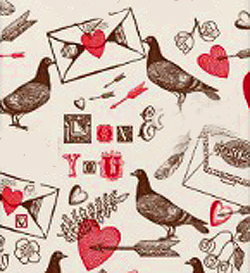 Love has various aspects and the word is used to describe many examples, most of which are far removed from its meaningful sense. For instance: ‘I love your new hat,’ or: ‘I’d love a cup of tea’. Then there is romantic love, usually engendered by certain feelings when the principle is so enamoured by the other that a state is experienced known as ‘falling in love’, more accurately an enchantment in fact.

Of course there is an element of selfishness in this since the principle wants to capture and own the other for gratification and personal pleasure, therefore, strictly speaking this state cannot be called Love, although enchantment might be appropriate.

There is however, another interpretation whereby Love has little to do with feeling but rather with action.

The act of giving entirely free from strings or conditions.

This contradicts the cultural conditioning with its lesson  to ‘get’,  and its sibling to ‘withhold’.

This is the real revolution and always has been, quite distinct from resistance to the mad destructiveness of national governments. A revolution such as this needs no infrastructure or mass adherents since it is concerned only with each individual’s personal input and is fortunately free of any possibility of political suppression.

One glance at this proposition however, will be enough to show its hopeless naivety for in the present milieu who will remove their earphones or snatch their eyes away from their mobile phones long enough to seriously consider it?

This is why Love, stripped of its clichés is so difficult.

There is another word:  ‘compassion’, which is sister to Love, although sometimes the two become a little confused.

A pigeon limps around pecking amongst the table legs of an outdoor cafe. It seems to be alone, unable by reason of a crippled claw to keep up with its fellows. At times it attempts to preen its feathers, but, supported by only one leg cannot maintain a balance and its plumage, lacking this attention, is seriously bedraggled. The pigeon’s eye now alights upon a few crumbs of toast fallen from a nearby table, and it begins a clumsy one-legged hop to reap this small harvest. However, as it nears the feast it notices that there is a pair of shoes within a few feet of the crumbs and it hesitates, cocking an eye at the shoes and up the trouser legs of the occupant of the table. Inside the shoes and trousers is a ramshackle man named Smith, who has been watching the pigeon for some time.

He has noticed the lameness and solitary existence forced upon the bird and feels a growing empathy for it. The pigeon dithers around but cannot quite summon the courage to approach within pecking distance of the crumbs. Smith keeps absolutely still while attempting to exude an aura of benevolence and good will. The pigeon watches him closely and finally convinced for one brief moment that he represents no threat darts recklessly forward, snatches up a crumb and hops clumsily away.

With this success comes growing confidence and again the sudden rush and quick retreat, while Smith continues with his immobility.

He notices that the retreat is becoming less anxious; perhaps even desultory, and soon the pigeon is pecking around between his feet. He admires the courage of the bird, handicapped in this way and deprived thus of the association of its fellows. Ragged of plumage yet undaunted of spirit the pigeon takes on the challenge of life without self-pity or despair. He feels growing warmth for the bird; it swells up from within and permeates his whole body. He looks at the pigeon and allows the feeling to radiate outwards towards it. He has never felt the like of this before.

‘This must be love’ he thinks. ‘The first time in my life I feel love, and it’s for a bloody pigeon!’

View all posts by David →
This entry was posted on 7 November, 2013 in homepage and tagged dave tomlin, first love, ins and outs of love, love. Bookmark the permalink.