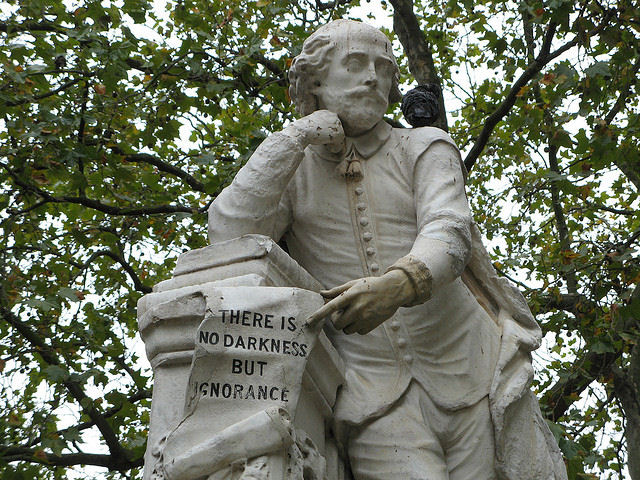 The Intellectual Cleansing of Leicester Square

As the ‘new look’ Leicester Square was unveiled this week amid the usual the bland hurrahs, no one noticed the casualties.

Gone from the four corners of the ‘pocket park’ are the four busts of Sir Joshua Reynolds, William Hogarth, Sir Isaac Newton, and the surgeon John Hunter (of Hunterian Museum fame).

Missing also is the full statue of Charlie Chaplin. All that’s left is the beautiful statue of Shakespeare which stands in the centre.

A quote inscribed on the statue – under Shakespeare’s right elbow – from the play Twelth Night is appropriate: ‘There is no darkness but ignorance.’

Reports by the Independent Newspaper and the Press Association made no mention of the departed icons. They merely reprinted the gushing enthusiasms of Mayor of London Boris Johnson who described it as a ‘fantastic makeover’ and Deputy Leader of Westminster Council Robert Davies who hailed it as an ‘ambitious regeneration project.’

Boris Johnson: “This fantastic makeover is an integral part of the legacy that London 2012 will bring, helping to rid the square of the blight of anti-social behaviour and creating a must-see destination for the thousands of people who visit each day.”‘

Robert Davies: “This ambitious regeneration project has breathed new life into the square and has given it a vibrant new feel which is more in keeping with its international reputation.”

“Central London deserves a state-of-the-art cultural destination, particularly in this Olympic year, and we hope Londoners and visitors alike will be impressed with the results.”

A City of Westminster site adds: ‘The transformation fo (sic) the famous Leicester Square has taken just over seventeen months to complete and with everything now in place, the square is ready to welcome the world to commemorate the Queen’s Diamond Jubilee and the London 2012 Olympic Games.’

The ‘cultural destination’, though, is obviously too ‘state-of-the-art’ to offer a place to has-beens like Reynolds, Hogarth, Newton, Hunter and Chaplin.

It seems like intellectual cleansing. It’s as if Westminster Council thinks the tourists will all recognise Shakespeare – a listed statue anyway and therefore immovable – but not the others. It must be particularly galling for admirers of John Hunter that his bust has been surgically removed.

It’s also a loss to local history. Shakespeare and Chaplin never lived in Leciester Square; they are there as emblems of the ‘entertainment industry’ so associated with the area. But Reynolds, Hogarth, Newton and Hunter were residents. Another local genius who was never commemorated – and should  be – was the newly-married William Blake who lived in Green Street (now Irving Street), Leicester Fields as it was then, in 1782-84.

The new highly artifical, manicured Square seems to want to cater for family groups. There is less grass, replaced by granite paving. The old-style black railings have been replaced by blingy stainless steel. Where the majestic bust of Hogarth once stood now boasts what looks like a large cylindrical steel ashtray.

Once again, Westminster Council, as well as the Greater London Council and the Mayor of London, are guilty of gross philistinism. They have dumbed-down London.

The plan was to eliminate ‘anti-social behaviour’ in Leicester Square, but why can our public servants not do something to eliminate cultural vandalism? There has been no explanation or apology for this desecration. Such philistinism inevitably goes hand in hand with other other types of injustice. This is the same council that brought us social cleansing