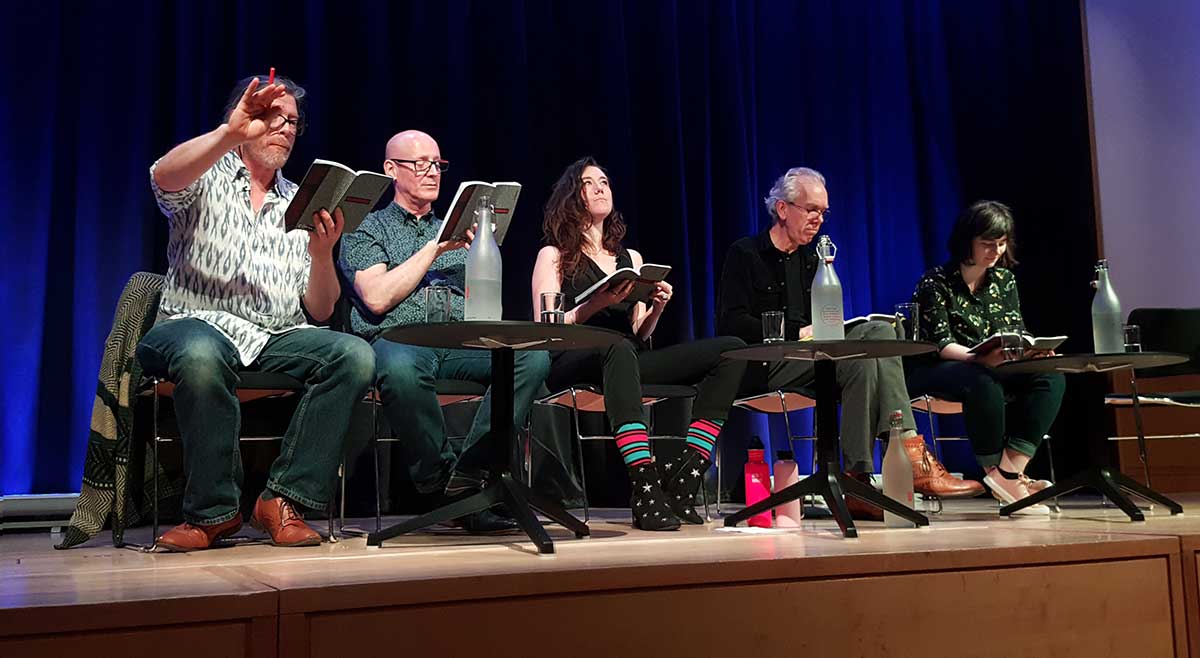 On a reading of Alistair Fruish’s The Sentence, British Library Knowledge Centre

It is so. Just as Daisy Campbell announces:

‘Four hours of Now’ in which  writing is a river of time in full flow.

Furthering it through the current with the monosyllable wordstones

That both his heart and/or pen/laptop throw.

The Sentence stems from that heart

And from the soul it sound covers, with the blood of experience boiling

This potion like book incantates. from stream of consciousness to the real

And to each event Fruish witnessed, in the flush of time passing

The characters caught within it, all serve and pass sentence

On what the shattering law incubates.

From outcast to inmate to champion of expression,

This continuing sentence dazzles like the sun struck canals on new worlds.

In the waterfall of this voice came a broken throat cleared for singing,

And women to commemorate and unfurl.

We were introduced in this room to a life in full chapters.

That these often passed in an image or a in a run of words stunned the ear.

As the audience listened hard to six trusted readers

They were given the book text to follow, allowing the musical connect

To rise clear. For this was a concert indeed, a recital it seemed,

Beamed from Heaven; with these hard words as angels

Gracing the expletive, along with both the profound and profane,

From the drug fed wasteground to stars, the journeys inside

This one novel are scorched on the conscience

In so many different understandings of blame.

The chosen team demonstrate the poetics within the found

Sentence, being themselves trusted poets populating the page

Grants a discovery of the past its full worth.  The actor Graham Gavin

Completes this search for the truth in sound spearing, and it is a kiss

Made from language as the sharing of breath promises.

Is felt and seen  on the pages and in the moments before listeners.

As one performer reads on their successor dissolves through to take over,

Glistening. As one voice fades, there’s the rise and the regeneration,

Assuring all that this story is an immersion for all of us in its waves.

As we become hypnotised and dream drown, the words themselves

Become water, freeing experience and removal from the ways we are bound,

Found and saved. So the vast story strikes from the briefest stirring

Of surface, to ripple out and subsume us, turning the trickling ‘Now’ into seas.

This ‘Now’ is stretched too by a host of continuity readers

And there is also a chance, primed by an open chair to take over

And swim a while in the river, and to feel in your mouth as you travel

The sharp taste and texture of each sensation and sound and phrase twist.

So this is a book as event, with audience as the writing, and Fruish’s life,

Work and choices guiding you on word by word.

To be heard. The Sentence serves all and it is one we should follow.

After Kiss My Asbo, The Sentence makes all we once thought of as true

Quite absurd.  It was an honour to serve. The Sentence survives as an object.

Gathering weight, this slim volume encompasses all of the world.

From one life, others grow, as with each touch and expression

We gain fresh perspective on what a virulent soul understands,

That we, the condemned can now live our lives free from judgement

And that love’s true expression creates its own method,

That has been seen and suggested by the important book

View all posts by David →
This entry was posted on 18 April, 2018 in homepage and tagged Alistair Fruish, British Library Knowledge Centre., David Erdos, The Sentence. Bookmark the permalink.