from A CHANGE OF REGIME (a novella) 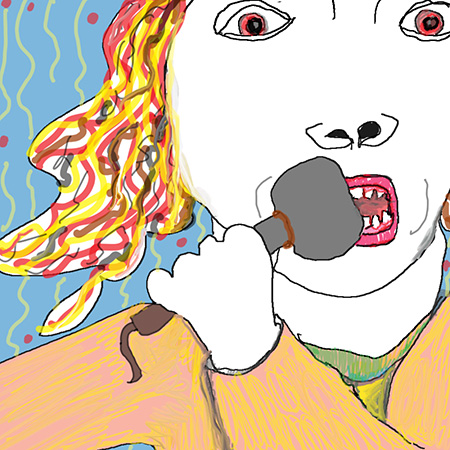 …… and while nobody was taking
any notice Miss Roxy grabbed hold
of the microphone and, re-gendering
what Harrison Bergeron said in
the story of the same name by Kurt
Vonnegut Jr., exclaimed “I am the Empress!
Do you hear? I am the Empress! Everybody
must do what I say at once! I am
a greater ruler than any woman or man
who ever lived! Now watch me
become what I can become!” –
at which point we all trooped
into the communal lounge and ate some cake,
the recipe for which someone said was almost
certainly borrowed from The Great British Bake Off
but it didn’t matter because,
in the words of Huck Finn’s Pap,
“it warn’t no harm to borrow things if
you was meaning to pay them back some time”
and Mrs. Baxter, who was the baker of the cake,
sure was, or so she said, but who knows how, or
when some time will arrive, and although some of
us examined our conscience for a while
we didn’t examine it for long,
it being a tedious thing to do,
and Miss Roxy meanwhile was on stage quoting
Adolf Hitler to the effect that “anyone who sees
and paints a sky green and fields blue
ought to be sterilized” and members of the art group
looked at one another through their black eyes
and rose-tinted spectacles wondering what
colour horror and terror might prove to be
and one or two other people began to ask
who this Miss Roxy person was, and there was
a leaflet being handed around by girls
dressed in fleshings which some saw as
a distraction and others as an attraction
and on the leaflet were the words
“Ask yourself what your heart wants”
and a picture of sartorially-challenged people
queuing for it was difficult to tell exactly what
and beneath the picture it said “And this will be
their salvation, and the salvation of the State”
all of which served to make some people stop eating
cake and think but someone pointed out
this was an example of a quotation being
used out of context because Miss Roxy
and Plato really seemed to have very little in common
but suddenly it was time for Wednesday afternoon
Bingo so we turned our attention to chance
and the laws of probability and hope
but understanding neither called for more cake
and while we were waiting we chatted for
a while but came up with zero answers and,
to be honest, the original question
had by that time been forgotten, then Mrs. Baxter
emerged from the kitchen bearing fresh cake
upon a silver salver, reminiscent of how according to
The Common Place Book of Literary Curiosities,
Remarkable Customs, Historical and Domestic Anecdotes
and Etymological Scraps “in Russia
raw turnip is handed about in slices in the first houses
upon a silver salver with brandy, as a whet
before dinner” but this was probably in
a distant past, and being neither of a first house
or one of the last the Boy Donald took it
upon himself to ……

Tweet
This entry was posted on 15 December, 2016 in homepage and tagged Martin Stannard, nick victor. Bookmark the permalink.